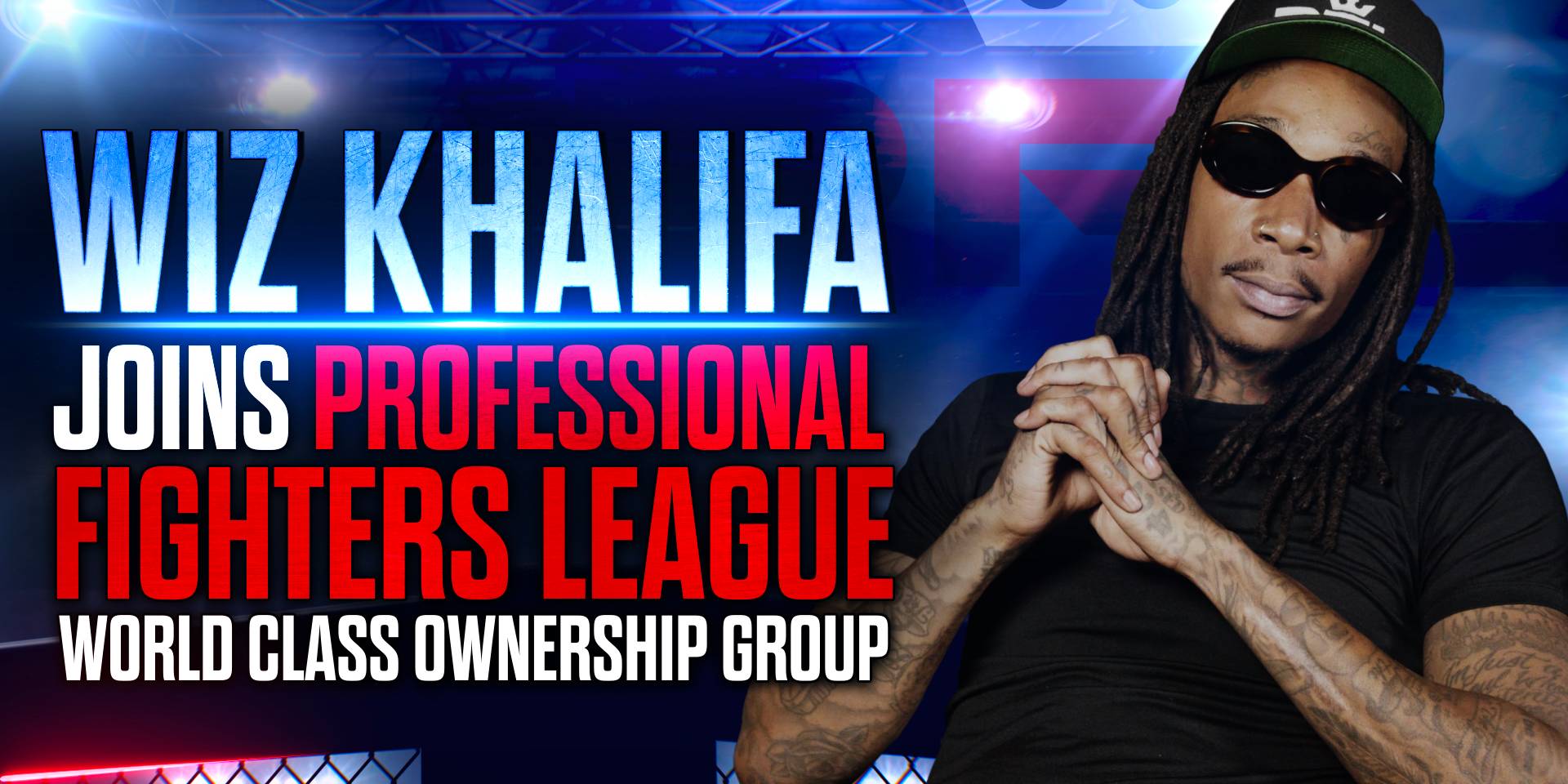 NEW YORK (April 22, 2021) – The Professional Fighters League (PFL), the fastest growing and most innovative sports league in the world, announced today that multi-platinum GRAMMY® & Golden Globe nominated artist Wiz Khalifa has invested in the league and will play an active role in continuing to shape the PFL brand for this generation’s sports fan.

“I’m so proud to join forces with the Professional Fighters League,” said Khalifa. “I’ve been doing MMA training for years now, and am also the biggest MMA fan – to be able to bring my expertise and vision to the sport is super exciting and I can’t wait for the action to get started on April 23.”

“I’m excited to welcome Wiz Khalifa to the PFL’s ownership group and partner with such a gifted global music and cultural icon,” said PFL CEO, Peter Murray. “Wiz will play an active role in shaping and amplifying the voice of the PFL brand and how it resonates with the 550 million fans around the world.”

Professional Fighters League has quickly established itself as the No. 2 MMA company in the world. With the addition of world-class talent – from elite fighters to established business executives – and partnering with industry-leading brands such as Anheuser-Busch InBev, GEICO, CarParts.com and Socios, the PFL continues to accelerate its global expansion. Sports fans across more than 160 countries around the world will be able to tune in to the league’s highly anticipated return on April 23 in Atlantic City, NJ.

About Professional Fighters League
Professional Fighters League (PFL) is the first and only to present MMA in the sports-season format where individual fighters compete in Regular Season, Playoffs, and Championship.  PFL is the innovation leader with the PFL SmartCage delivering viewers on-screen fight analytics and real-time prop bets.  PFL Roster is second to none with 25% of its fighters ranked in the top 25 in their weight-class.  All PFL 2021 Season events are live in primetime on ESPN2/ESPN+ in the U.S. (typically on Thursdays), as well as on leading broadcast and streaming outlets in 160 countries worldwide.

About Wiz Khalifa
Multi-platinum selling, Grammy and Golden Globe nominated recording artist Wiz Khalifa burst onto the scene with mainstream success with the release of his first major label debut album, ROLLING PAPERS‎ in 2011. ‎ROLLING PAPERS spawned the hugely successful hits “Black and Yellow,” “Roll Up,” and “No Sleep” and gave Wiz the platform to win the award for “Best New Artist” at the 2011 BET Awards and “Top New Artist” at the 2012 Billboard Music Awards. As a follow up to ROLLING PAPERS, Wiz Released O.N.I.F.C. in 2012. This album featured tracks “Work Hard, Play Hard” and “Remember You” featuring The Weeknd. His third studio album released in 2014, BLACC HOLLYWOOD, ‎debuted at #1 on Billboard’s Top 200 album chart and included hit single "We DemBoyz." Soon after, Wiz’s track,‎ “See You Again,” off the FURIOUS 7 soundtrack, catapulted to the top of the charts across 95 countries. Holding the #1 spot for 12 consecutive weeks, “See You Again” broke records by being Spotify’s most-streamed track in a single day in the United States and in a single week in 26 countries. In addition to winning 3 Teen Choice Awards in 2015, “See You Again” continued its success by winning a Critics’ Choice Award in the “Best Song” category, winning two Billboard Music Awards in the categories “Top Hot 100 Song” and “Top Rap Song,” earning three Grammy Award nominations in the categories “Song of the Year,” “Best Pop Duo/Group Performance,” and “Best Song Written for Visual Media,” and a Golden Globe nomination in the category “Best Original Song – Motion Picture.” Wiz released his album, KHALIFA, in February 2016 as a thank you to fans which included the tracks “Bake Sale” featuring Travis Scott and “Elevated.” In June of the same year, Wiz collaborated with Juicy J and TM88 to debut TGOD MAFIA PRESENTS: RUDE AWAKENING and embarked on his co-headlining “The High Road Summer Tour” with Snoop Dogg. On April 20th, 2017, Wiz launched his mobile app, Wiz Khalifa’s Weed Farm, which has garnered over 10.1 million downloads and is currently being played in over eight countries and six languages. Later that year, Wiz’s mixtape, LAUGH NOW, FLY LATER, was released in November and featured the chart-topping hit, “Letterman.” His latest studio album, ROLLING PAPERS 2, which is certified gold, was released in July 2018. Following the release, Wiz and rap duo Rae Sremmurd hit the road for their “Dazed and Blazed Tour” throughout summer 2018. In February 2018, Wiz partnered with Sovereign Brands to create McQueen and the Violet Fog, an Award winning gin and rated by the NY Times as the “Best Gin”. In April of 2019, Wiz released his 5-part docuseries with Apple Music, “Wiz Khalifa: Behind the Cam,” which gives viewers an exclusive look into his life and career. In the summer of 2019, Wiz went on his “Decent Exposure Summer Tour” with French Montana, Moneybagg Yo, Chevy Woods, and DJ Drama. In November 2019, Wiz starred in Apple TV+’s “Dickinson,” as the character of Death alongside Hailee Steinfeld, Wiz will also be featured in the upcoming second season, which will debut on January 8, 2021. Wiz is also a series regular in Fox’s animated sitcom, “Duncanville” which premiered February 2020 with a second season coming soon. On 4/20 of 2020, Wiz released his latest project, The Saga of Wiz Khalifa, which features his tracks, “Contact”, featuring Tyga and his latest single, “Still Wiz”. In October of 2020, Wiz, along with Nextbite, launched his latest business venture, a delivery only restaurant chain, HotBox by Wiz. The restaurant is now in all major metro areas. Most recently, Wiz released his latest playlist, Taylor Nights.