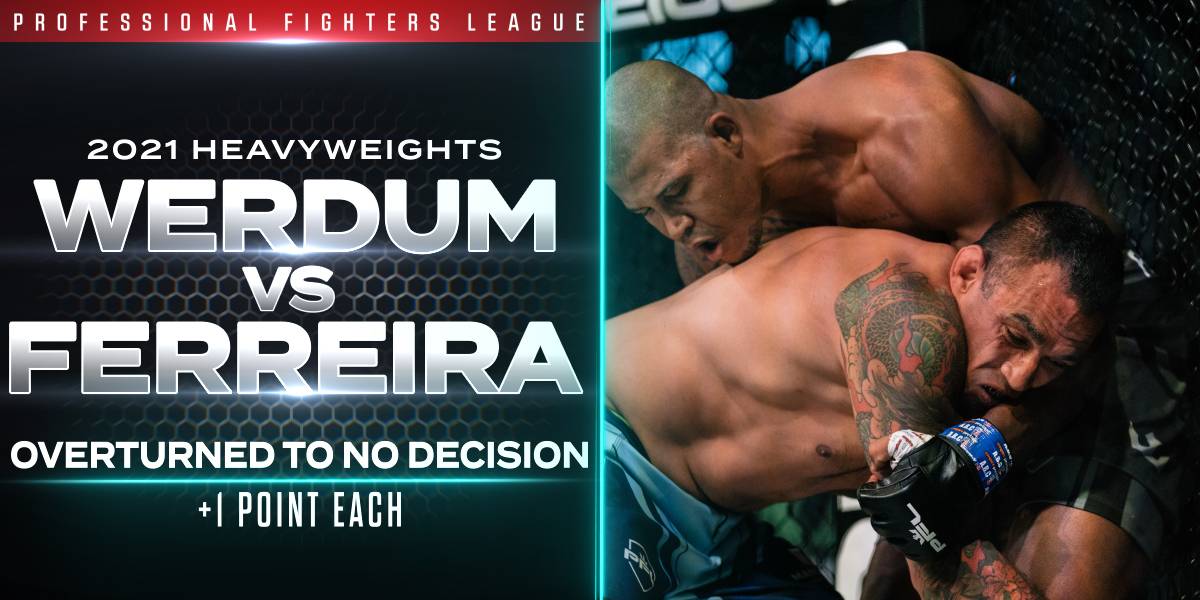 Werdum and Ferreira Deemed No Decision After Appeal

The third event of the Professional Fighters League 2021 Regular Season took place Thursday, May 6 from the Ocean Casino in Atlantic City, N.J. In the night’s headliner, former UFC Heavyweight champion Fabrício Werdum (24-9-1, 1 NC) made his League debut against his fellow Brazilian Renan Ferreira (6-2-0, 1 NC). Werdum is known as one of the most decorated Brazilian Jiu-Jitsu practitioners in the Heavyweight division and holds victories over legends Fedor Emelianenko, Alistair Overeem and Cain Velasquez. The towering Ferreira — who stands 6-foot-8 — entered the bout having scored six finishes in his six wins, including five via strikes.

Both men came out with flying side kicks. Werdum dropped down and latched onto a leg of Ferreira. He dragged his countryman to the canvas and passed to half guard. Ferreira scrambled and recovered his guard, but was unable to get back to his feet. Werdum passed to half guard and then looked to mount. Ferreira exploded and moved to top position. A triangle attempt from Werdum was countered with a barrage of punches from Ferreira. Werdum transitioned to an armbar from the bottom, and then back to the triangle. It looked like Ferreira tapped to the choke, but he dropped punch after punch and it hurt Werdum. He continued to batter the veteran with hammerfists and the referee halted the contest.

“I stopped because he tapped,” a dejected Werdum proclaimed after the fight. “He knows in his mind that he tapped.”

UPDATE: On Monday, May 10, it was announced by the New Jersey State Athletic Control Board that Fabricio Werdum’s appeal of the fight result was successful and the fight was changed to a No Decision. The commission ruled that Renan Ferreira’s tap was missed and the result was overturned. The change impacts the Heavyweight standings, as per PFL Rules, both fighters now earn a single point. Ferreira drops from second in the standings to fifth. Werdum, meanwhile, climbs into fourth place with three events left in the 2021 PFL Regular Season.