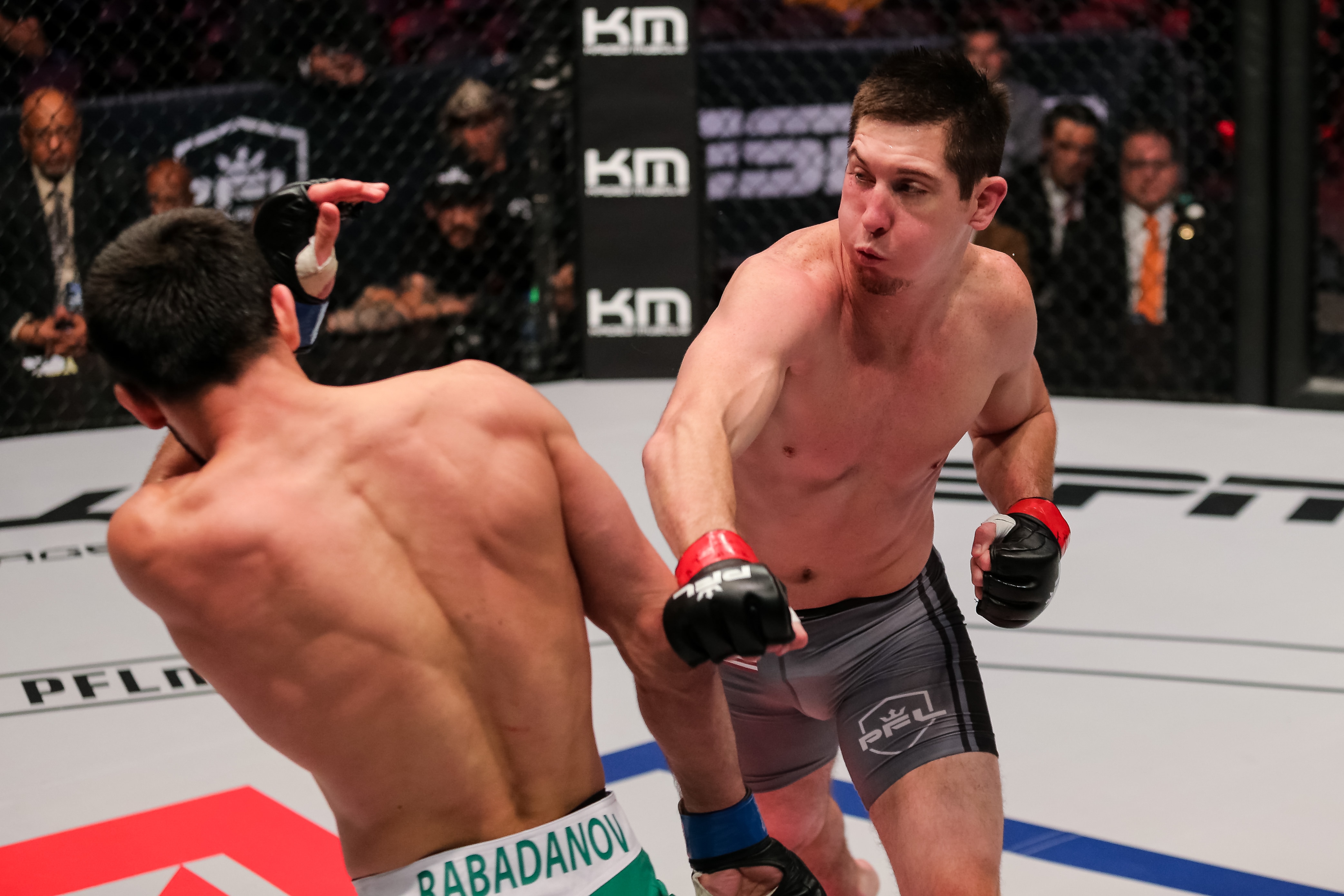 After its inaugural season took place last year, the Professional Fighters League has returned for its second season in 2019 and three events have taken place thus far, all of which have produced entertaining fights and electrifying finishes.

PFL 1, which took place on May 9 at NCYB Live’s Nassau Coliseum in New York, was highlighted by the debut of Olympic gold medalist Kayla Harrison, who started her campaign to become the first women’s lightweight champion with a three-point win over Larissa Pacheco in the event’s featured bout.

The ESPN 2 portion of the card also saw defending welterweight champion Magomed Magomedkerimov pick up right where he left off, earning six points with a victory over John Howard.

In addition, veteran Sarah Kaufman made her promotional debut at PFL 1, scoring an impressive first-round stoppage victory over Morgan Frier, while Sadibou Sy also made his presence felt at the event by scoring the third fastest stoppage in PFL history with a 17-second finish of David Michaud.

PFL 2 then took place on May 23 from NYCB Live’s Nassau Coliseum and was highlighted by the return of last season’s featherweight champion Lance Palmer, who earned three points with a victory over Alex Gilpin in the event’s featured bout.

PFL 3, meanwhile, took place on June 6 at the same venue and was headlined by Emiliano Sordi scoring a five-point victory over Vinny Magalhaes to establish himself as a legitimate threat at 205 pounds.

In addition to success of the three cards overall, the PFL has also introduced some new and exciting technology this season in order to better track and analyze statistics. One new addition has put a focus on tracking strike speed, so let’s go ahead and take a closer look at the 10 fastest strikes from the 2019 PFL regular season thus far.

At PFL 2, Steven Siler took on Gadzhi Rabadanov in a featherweight bout that served as the opening contest on the ESPN 2 portion of the card. Just under two minutes into the second round, Siler threw a strike that was recorded at 22.9 mph, which, as of now, ranks as the tenth fastest strike thrown throughout the regular season.

In the end, Siler ended up losing a decision and Rabadanov earned three points for his victory.

At PFL 3, the featured bout of the ESPN+ portion of the card played host to an intriguing light heavyweight bout between grappling guru Vinny Magalhaes and 28-year-old Emiliano Sordi. While some may have considered Magalhaes to be the favorite, Sordi ended up earning five points with a second-round TKO win.

In addition, he earned himself the ninth spot on this last by throwing a strike 2:23 into the second frame that clocked in 23.2 mph.

Interestingly enough, the aforementioned strike wasn’t the only one thrown by Sordi that currently ranks amongst the top 10 fastest strikes thrown throughout the regular season thus far.

In fact, in his fight against Magalhaes, Sordi threw a strike 2:39 into round two that was tracked to be 23.5 mph, which places him in the No. 8 spot as well.

In the opening bout of the ESPN 2 portion of the card at PFL 2, featherweights Steven Siler and Gadzhi Rabadnov did battle.

At PFL 2, Akhmed Aliev was able to not only make a name for himself but effectively establish himself as a threat at 155 pounds in his bout against Carlao Silva, which was broadcast on the ESPN+ portion of the card.

Just minutes into the first round, Aliev brutally knocked out Silva, earning an impressive victory in addition to six points for his efforts. He also, however, threw a 24.6 mph strike 2:47 into the round that landed him on this list.

Once again, Emiliano Sordi has found himself on this list.

2:47 into the first round of his featured light heavyweight bout against Vinny Magalhaes at PFL 3, Sordi threw a strike that clocked in at 24.8 mph. Through three regular season events thus far, that strike stands as the fifth fastest.

The ESPN 2 portion of PFL 2 played host to a highly intriguing featherweight bout between Jeremy Kennedy and Luis Rafael Laurentino. It was the 26-year-old Laurentino, who now holds a 34-1 professional record, however, who stole the show, scoring a first-round TKO victory and earning six points.

In addition to his impressive victory, Laurentino was also recorded throwing a 25.4 mph strike just :22 into the first round, which ranks as one of the fastest strikes of the regular season thus far.

In the opening bout of the ESPN 2 portion of the card at PFL 3, light heavyweights Dan Spohn and Bozigit Ataev squared off. The 39-year-old Ataev, a veteran of the sport, made quick work of things, picking up a first-round stoppage victory over Spohn and earning six points.

The Russian also threw a strike 3:08 into the first round that was tracked at 25.52 mph, putting him at No.3 in regard to the fastest strikes thrown.

Exactly two minutes into the opening frame, Delija threw a strike that came in at 27.12 mph, which ranks as the second fastest strike thrown throughout the 2019 season thus far. In the end, Delija also earned a unanimous decision victory and three points.

Taking on Rakim Cleveland on the ESPN+ portion of PFL 3, 32-year-old Russian heavyweight Viktor Nemkov picked up a unanimous decision victory and earned himself three points.

What stands out more in regard to this list, however, is a strike he threw 3:43 into round two. That strike clocked in at a whopping 30.6 mph and now stands alone as the fastest strike thrown throughout the regular season thus far.