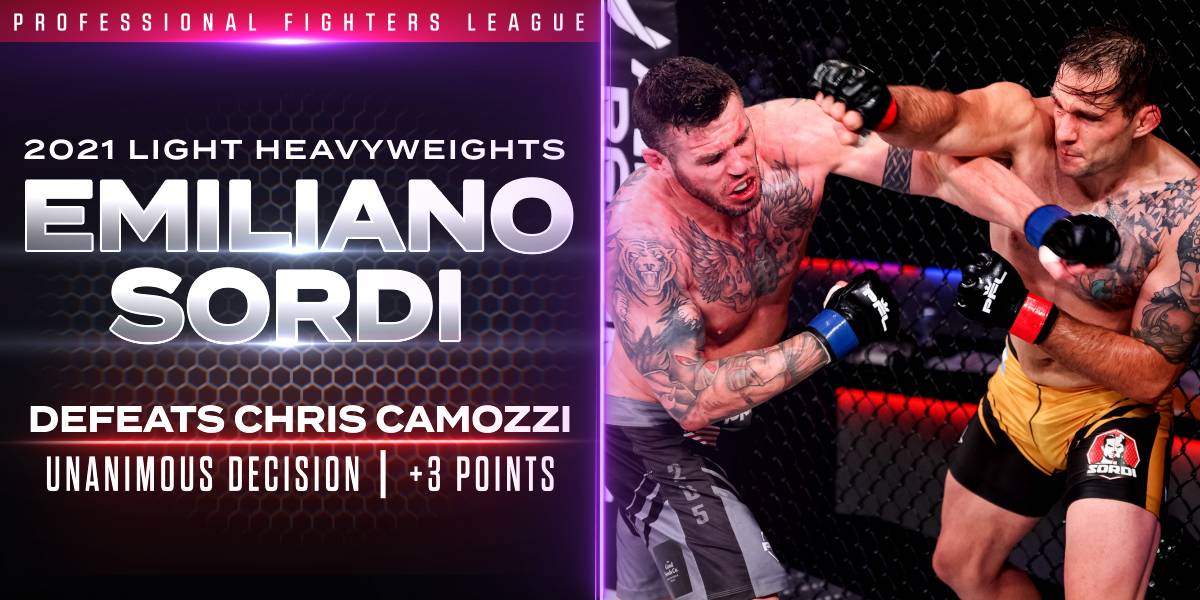 Another league champion began his journey toward a second season title and another million-dollar prize to kick the PFL 2 main card, when reigning light heavyweight titlist Emiliano Sordi (23-8) collided with UFC and GLORY Kickboxing veteran Chris Camozzi (25-15). Sordi scored five finishes en route to last season’s PFL title. The Argentinian entered the match-up with the iron-chinned Camozzi having stopped all 22 of his career wins. Colorado’s Camozzi went 3-1 in four kickboxing bouts before returning to MMA action in 2019. He looked to upset the reigning champion to start the new season.

Camozzi opened with an inside leg kick and flurry of left hands. Sordi quickly responded with a heavy right hand. More kicks found the mark from Camozzi and he cracked Sordi with a left hand. Sordi initiated the clinch and Camozzi scored with some uppercuts. The pair traded heavy shots on the break and the fight returned to range. A short right from Camozzi landed, but was countered by a spinning backfist from the Argentinian. Sordi transitioned to Camozzi’s back standing and he took the fight to the mat. He mounted Camozzi and then worked to his back. Sordi went hard for a rear-naked choke, but Camozzi was able to defend. There was no panic from the veteran as Sordi was unable to find the finish.

Sordi delivered a heavy body kick to start round two. He followed it with a right hand. Camozzi walked forward and he attacked the lead leg of Sordi. They clinched and Camozzi was active with short punches. Another low kick sent Sordi to the mat. He recovered and the pair traded heavy punches in the center of the cage. Both fighters connected, but it was Sordi who fell to the mat. Camozzi jumped on top and dropped punches from the half guard. Sordi worked his way back to his feet and then secured a body lock. He dragged Camozzi to the ground, but could not pass the guard. Camozzi kicked him off and returned to his feet. He pummeled Sordi with punches late in the stanza. Camozzi looked for a guillotine, forcing Sordi to his back as the round expired.

The final frame opened with a huge right hand from Sordi that dropped Camozzi. Sordi chased him to the ground. He passed to mount and started to drop heavy shots on Camozzi. The veteran recovered his guard, but he struggled to escape from under Sordi. Camozzi transitioned to his hip along the fence and Sordi peppered him with left hands. Camozzi worked back to his feet, but he did not stay there long. Sordi secured a final takedown and once again moved to mount. He briefly looked for a choke, but the fight was sent to the scorecards.

When the decision was read, it was the former champion Sordi who earned three points in the light heavyweight standings with the win.