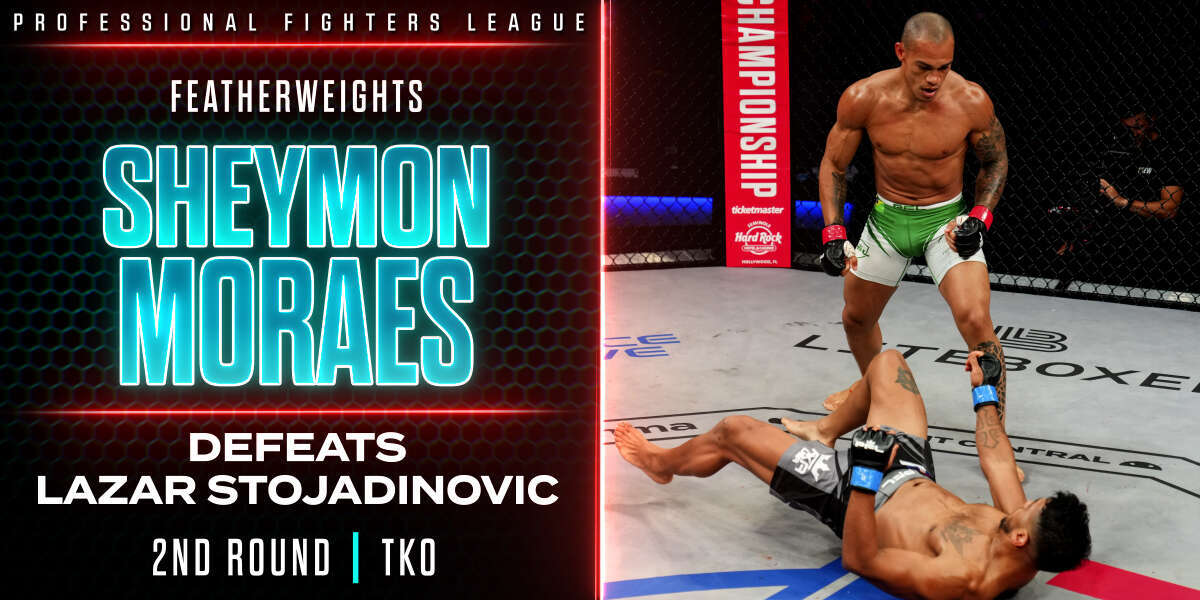 The final non-PFL Playoff bout of the night took place in the featherweight division when Sheymon Moraes and Lazar Stojadinovic went head-to-head in the ESPN+ main event.

Moraes (12-5) went 1-1 during the 2021 PFL Regular Season, most recently submitting fellow preliminary competitor Jesse Stirn with a kimura at the buzzer to earn the first submission victory of his career.

Stojadinovic (14-8), meanwhile, has won 10 of his last 13 fights and is the former Global Legion FC Featherweight Champion. "BronxBomber" won 6 of his previous professional fights by submission, but also has experience as a pro boxer under his belt.

TWO IN A ROW!
Sheymon Moraes Battles Back and gets the TKO win over Lazar!#PFLPlayoffs pic.twitter.com/Z94AzRiQOj

Both men spent the opening minute of the fight at distance, getting a feel for their opponent and looking for any early openings. Stojadinovic began picking up the pace slightly with some kicks, before rushing in to close the distance. The fighters battled for position in close range, but separated once neither man could get the upper hand. Stojadinovic came jumping in with some wild swinging punches and wobbled Moraes, before landing a takedown and quickly moving to mount. Moraes bucked Stojadinovic out of the mount and returned the favor with a takedown of his own. Stojadinovic worked his way back to his feet and pressed the action against the cage with double underhooks. Moraes whiffed on a head kick in the closing seconds, while Stojadinovic slipped on a kick of his own as the buzzer rang.

Lazar wobbles Sheymon and is in full control with a minute left in the 1st round!#PFLPlayoffs pic.twitter.com/Yer9zUySyu

Moraes had more bounce in his step to open the second round, but Stojadinovic was able to close the distance and again gain the underhooks against the cage. Moraes opened up his attack with a head kick which appeared to wake up Stojadinovic who came rushing in with a flurry in an attempt to get Moraes to engage in a brawl. Stojadinovic continued moving forward and forcing Moraes to fight at his pace. Stojadinovic slipped during an exchange, but Moraes was unable to capitalize. Referee Keith Peterson halted the action to warn both fighters about clashing heads. When the action restarted, Moraes landed a heavy kick to the body and used a single-leg to briefly dump Stojadinovic to the ground. Stojadinovic quickly bounced back to his feet and ate a step-in knee from Moraes for his efforts. Moraes caught a high kick attempt from Stojadinovic and returned fire with a straight right down the middle. After Stojadinovic jumped on another attack, he ran right into a powerful overhand right from Moraes and immediately collapsed back to the mat. Moraes landed some heavy ground-and-pound until Peterson stepped in and called an end to the action.

Moraes took a few minutes to get rolling, but once he was warmed up, his power was evident. Moraes began landing with consistency in Round 2 and ultimately landed a devastating overhand right hand that brought an end to the fight and got the crowd on their feet just in time for the start of the main card and Playoff bouts. .