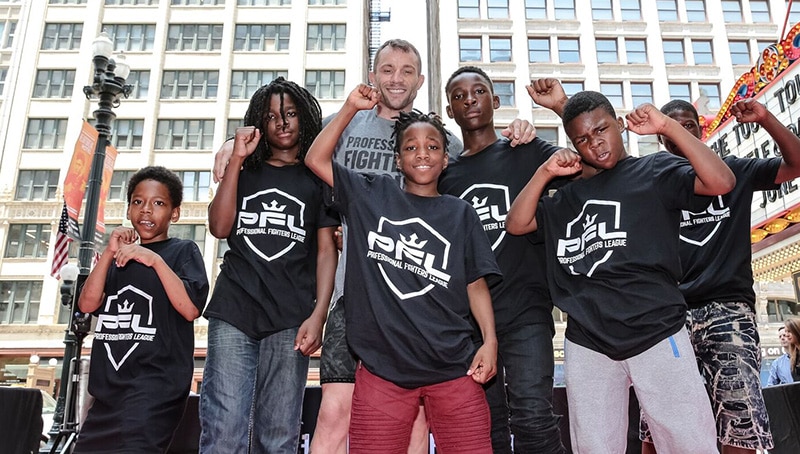 Today, the Professional Fighters League (PFL) held an open workout outside of the Chicago Theatre in Chicago, the host city of PFL2—the second regular season event of PFL’s debut season—on Thursday, June 21, at Chicago Theatre. Ahead of Thursday’s 13-bout event, world-class fighters Illinois native Will Brooks, Luiz Firmino, Bruce Foster and Ramsey Nijem gave a preview of the action to come to the gathered crowd. Two-time Olympic gold medalist, Kayla Harrison, who is making her professional MMA debut at PFL2 this Thursday also hit the mats to show off her skills and agility.

Onlookers enjoyed the sneak peek of some of the elite fighters that will battle it out in PFL2. Twenty-four lightweight and light heavyweight fighters are competing in PFL2 to claim a spot in PFL’s “win or go home” playoffs and, ultimately, their share of a $10 million post-season prize pool—the largest prize pool in the history of MMA.

“We’re excited to keep our action-packed season going here in Chicago,” said Carlos Silva, League President of PFL. “Today, fans saw the skills that PFL fighters are bringing to the cage, and there will be even more athleticism and talent on display this Thursday at the Chicago Theatre.”

Joe A. Martinez, PFL announcer, and Caroline Pearce, a member of PFL’s broadcast team, hosted the workout and conducted interviews of the athletes in front of eager fans. PFL also invited youth from the Englewood Crushers Club, a gang-prevention boxing club on the South Side of Chicago. Kids and teens from the Englewood Crushers Club hit the mat with Foster and had the chance to learn a few moves from Olympic champion Harrison.

Tickets for PFL2 are on sale now and can be purchased at www.pflmma.com and www.ticketmaster.com.

The 2018 PFL season features 126 fights on Thursday nights in seven regular-season events, bracket-style “win or go home” playoffs, and a $10 million post-season prize pool—the largest prize pool in the history of MMA. The season began with 12 athletes in each of six different weight-classes. Eight fighters from each class will earn their way into the playoff round, and one fighter in each division will earn the title of champion.

U.S.-based and international fans can watch all PFL regular season, playoff, and championship fights—over 66 hours of live action—for free. In the United States, all of the PFL regular season events air live on Thursday in primetime exclusively on NBCSN, and stream live on NBCSports.com, the NBC Sports app, and pflmma.com. Outside the U.S., Facebook streams up to six hours of free, live coverage for each event. In the U.S., fans can watch the first three hours of coverage of each event on Facebook.

The Professional Fighters League presents MMA for the first time in the sport format where individuals compete in a regular season, “win-or-go-home” post-season, and championship. Co-founded by Donn Davis, Russ Ramsey, and Mark Leschly, the Professional Fighters League is backed by an ownership group of sports, media, and business titans. The PFL 2018 Season has 72 fighters in six weight-classes, competing in the regular season on Thursday nights in June, July, and August. The top eight in each weight-class face off in single-elimination playoff fights on Saturday nights in October and the PFL season concludes December 31 with six championship bouts back-to-back with a $10 million prize pool. Watch the entire PFL season action beginning June 7 live on NBC Sports Network (NBCSN), Facebook Watch, and PFLmma.com. For more visit www.PFLmma.com.