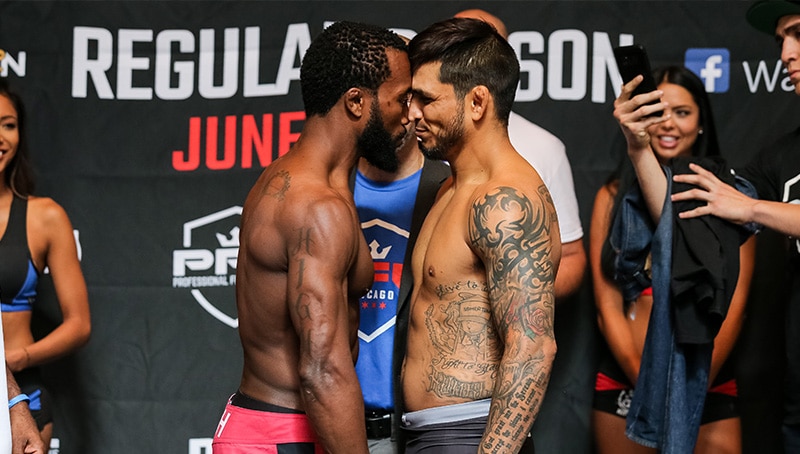 CHICAGO—Today, 26 fighters slated to compete in PFL2, the second regular season event of the Professional Fighters League, stepped on the scales at the Chicago Theatre for an official weigh-in. All fighters were cleared to square off at PFL2, which will take place at the iconic Chicago Theatre in Chicago, Illinois, on June 21 at 5 p.m. CT.

In addition to the light heavyweight and lightweight professional fighters fighting in PFL2’s regular season, Kayla Harrison, two-time Olympic gold medalist, and Brittney Elkin weighed in at the iconic Chicago Theatre ahead of their match at PFL2. There is national excitement surrounding Harrison’s professional MMA debut with PFL. Fans are also on the lookout for former Bellator Lightweight World Champion and Illinois native Will Brooks’ PFL debut as he matches up against Brazilian Luiz Firmino.

“Based on what I saw today at the weigh-ins, I know that PFL2 is going to be just as phenomenal as our debut at Madison Square Garden,” said Carlos Silva, League President of PFL. “Our athletes have been training hard and are ready to face off and compete for our $10 million prize pool. Fans are in for incredible match-ups and Kayla’s debut should be electric.”

The 24 light heavyweight and lightweight PFL fighters are in the running to earn a place in PFL’s debut season “win-or-go home” playoffs and the December 31 championship event where $10 million will be awarded—the largest prize pool in MMA history. Each champion in PFL’s six weight classes will go home with the title and $1 million.

On Wednesday, PFL announced the final card for PFL2:

U.S.-based and international fans can watch all PFL regular season, playoff, and championship fights—over 66 hours of live action—for free. In the United States, all of the PFL regular season events air live on Thursday in primetime exclusively on NBCSN, and stream live on NBCSports.com, the NBC Sports app, and www.pflmma.com. Outside the U.S., Facebook will stream up to six hours of free, live coverage for each event. In the U.S., fans can watch the first three hours of coverage of each event on Facebook.

The Professional Fighters League presents MMA for the first time in the sport format where individuals compete in a regular season, “win-or-go-home” post-season, and championship. Co-founded by Donn Davis, Russ Ramsey, and Mark Leschly, the Professional Fighters League is backed by an ownership group of sports, media, and business titans. The PFL 2018 Season has 72 fighters in six weight-classes, competing in the regular season on Thursday nights in June, July, and August. The top eight in each weight-class face off in single-elimination playoff fights on Saturday nights in October and the PFL season concludes December 31 with six championship bouts back-to-back with a $10 million prize pool. Watch the entire PFL season action beginning June 7 live on NBC Sports Network (NBCSN), Facebook Watch, andPFLmma.com. For more visitwww.PFLmma.com.