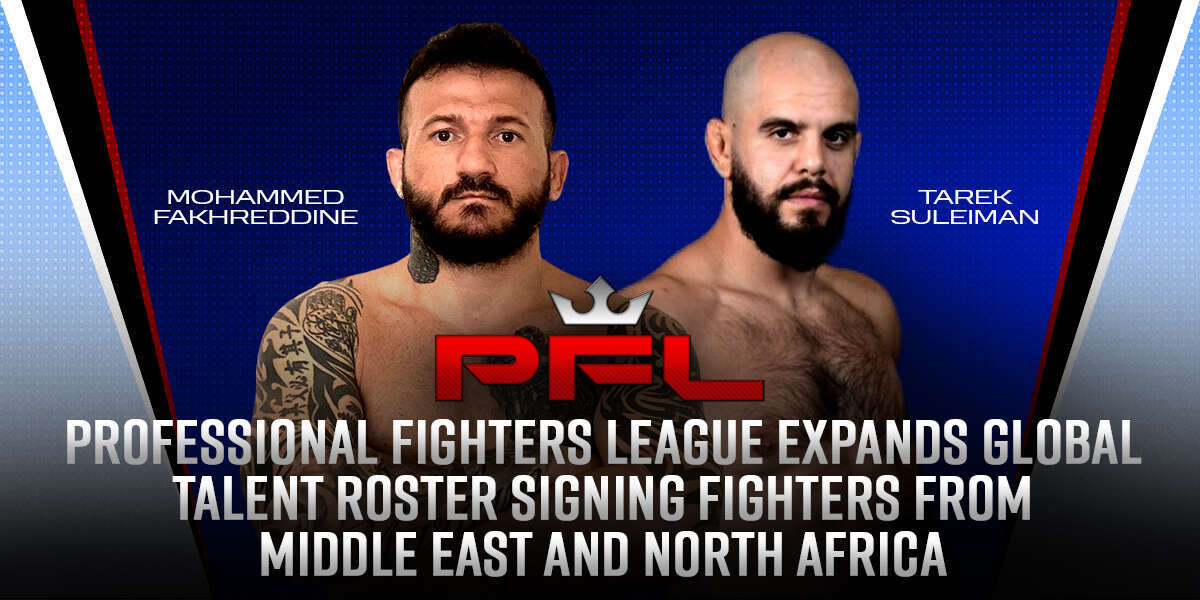 The PFL Playoffs begin on Friday, August 5, from the Hulu Theater at
Madison Square Garden in New York City

Mohammad Fakhreddine of Lebanon and Tarek Suleiman of Syria have been signed to exclusive PFL contracts and join a roster made up of the best talent from around the world.

“The Professional Fighters League is pleased to announce the addition of Mohammad Fakhreddine of Lebanon and Tarek Suleiman of Syria to our global MMA fighter roster,” says PFL CEO Peter Murray. “The PFL takes great care in scouting and signing the best MMA athletes from around the world, and we are committed to further developing the sport in the Middle East starting with signing top fighters from the region and staging year-round events in the UAE.”

“We are excited to add these two talented fighters from the Middle East to our global roster,” said Ray Sefo, President of Fighter Operations of PFL. “We will put them on a global stage, including MBC in the MENA region and other major media networks around the world, to showcase the growing talent pool from this region. PFL is committed to signing and developing top talent from the Middle East and letting them compete with the best fighters from around the world.”

Tarek Suleiman a 32-year-old Middleweight out of Syria joins the Professional Fighters League with 12 career wins and a wrestling background.

The pathway to the 2022 PFL World Championships and $1 million purse that comes with it will begin with a field of 24 fighters across six divisions. Each of the three Playoff events will feature the top-four fighters across two weight divisions battling to earn a spot in the final – the biggest night in MMA – with no other sports league able to match the thrilling action in this win-and-advance, lose-and-go-home format.

The second half of the 2022 PFL Regular Season continues Friday, June 24 from OTE Arena at Atlantic Station in Atlanta, with the final Regular Season event July 1.

PFL is the #2 MMA company worldwide by all key metrics, including distribution reach, broadcast and streaming audience per event, and fighter roster quality. The PFL talent roster is world-class, with 25% of the fighters independently ranked in the top-25 of their respective weight class, including 2x PFL Champions Kayla Harrison and Ray Cooper III, former Bellator Champions Rory MacDonald and Julia Budd, and former UFC Champion Anthony Pettis.

PFL League is primetime in the U.S. on ESPN and ESPN+ and broadcast and streamed worldwide to 160 countries with over 25 media distribution partners including Channel 4, DirecTV, RMC Sport, Eurosport, Sky Sports.  PFL Challenger Series is live on FUBO TV in the U.S.  The PFL fighter roster is world-class, with 25% of PFL fighters independently ranked in the top 25 in the world.  The PFL proprietary SmartCage data and analytics platform powers real-time betting and provides next-gen viewing experience.