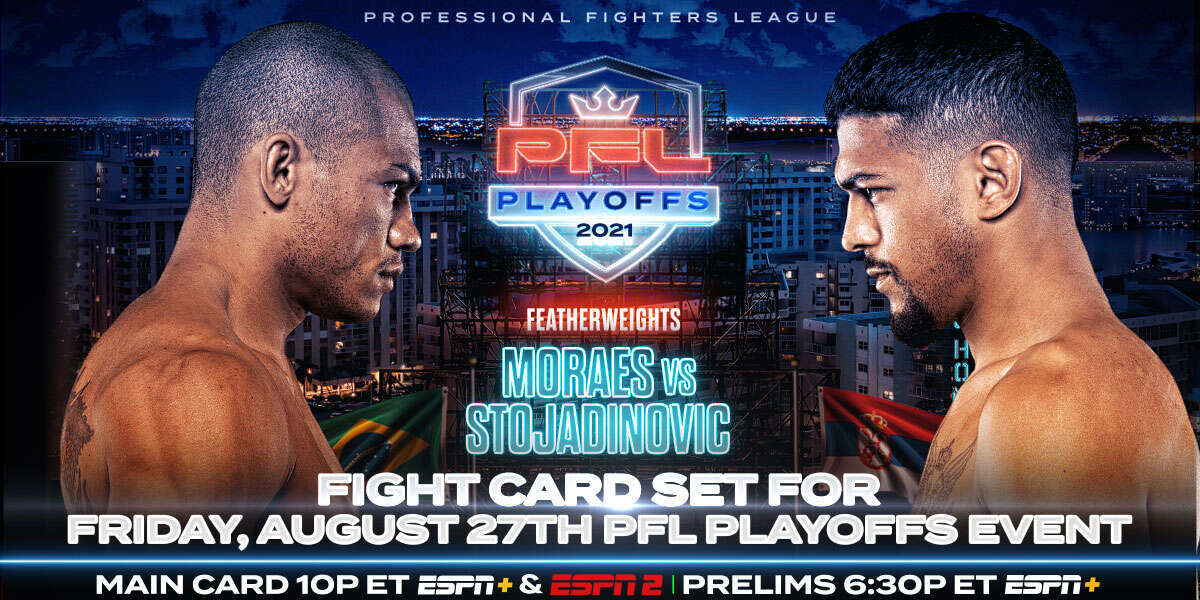 NEW YORK (August 10, 2021) – The Professional Fighters League (PFL), the fastest growing and most innovative sports league, has set the card for its third and final Playoff event Friday, August 27 to be simulcast on ESPN2 and ESPN+. Fighters across the featherweight and light heavyweight divisions will look to make it out of the final four and move one step closer to becoming a PFL champion and capturing $1 million in prize money.

“PFL’s third and final Playoff event on Friday August 27 will showcase the will and skill of the featherweight and light heavyweight divisions,” said PFL CEO Peter Murray. “With PFL Playoff 3 comes the excitement of knowing the PFL Championships are around the corner. PFL and the fighters look forward to putting an exclamation point on the final Playoff event as we head to the Championships. Win and move on, lose and go home!”

Brendan Loughnane and Movlid Khaybulaev will clash in a featherweight contest, each fighter looking for their first PFL Championship berth. Number one seeded light heavyweight Antonio Carlos Jr will take on former PFL Champion Emiliano Sordi in what is one of the most anticipated fights of the PFL Playoffs.

Also in featherweight action, the wrestling standout Bubba Jenkins, in his first PFL season, takes on three-time PFL Playoff competitor Chris Wade and light heavyweights Cezar Ferreira and Marthin Hamlet will lock horns for a shot at fighting in the PFL Championship.

Rounding out the stacked card, two featherweights in their first PFL season, Sheymon Moraes and Lazar Stojadinovic will look to showcase their skills in the SmartCage, while Chris Camozzi and Cory Hendricks do battle in a light heavyweight contest.

The final PFL Championship spots will be up for grabs when contenders from the featherweight and light heavyweight divisions compete at the third playoff event on Aug. 27 in primetime on ESPN2 and ESPN+.

In the playoffs, fighters compete to advance to the 2021 PFL World Championship, the biggest night in MMA – with six title fights in one night, the winner of each will earn $1 million.

Professional Fighters League has quickly established itself as the No. 2 MMA company in the world. With the addition of world-class talent – from elite fighters to established business executives – and partnering with industry-leading brands such as Anheuser-Busch InBev, GEICO, DraftKings, BetMGM, Upper Deck, CarParts.com and Socios, the PFL continues to accelerate its global expansion.