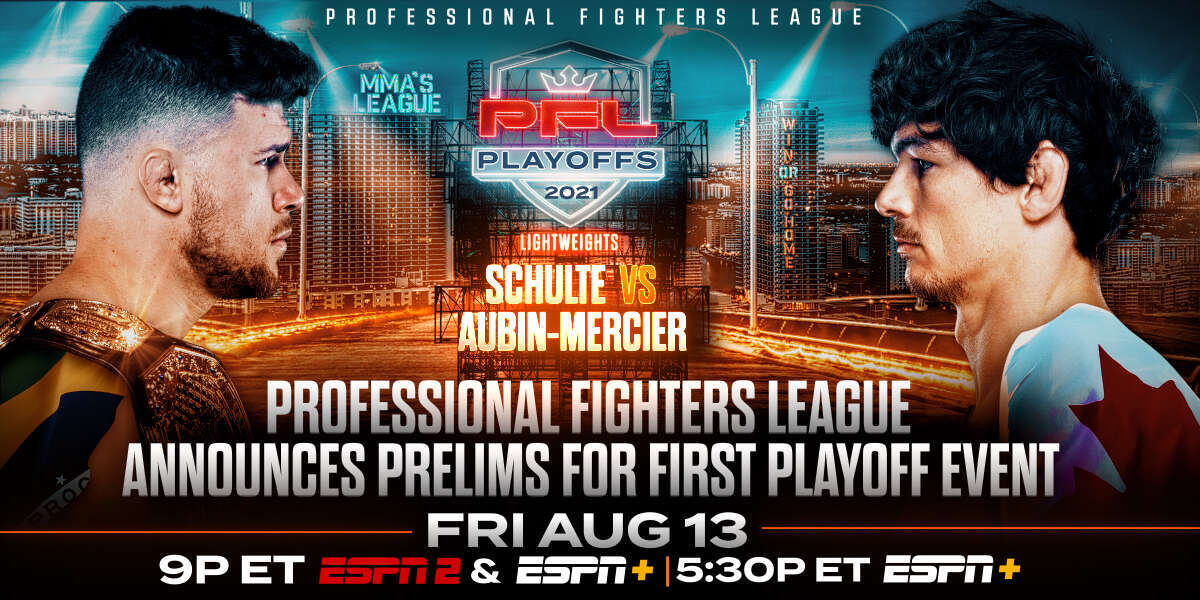 NEW YORK (July 27, 2021) – The Professional Fighters League (PFL), the fastest growing and most innovative sports league, has set the card for its first Playoff event Friday, August 13 on ESPN2 and ESPN+. Fighters across the lightweight and welterweight divisions will look to make it out of the final four and move one step closer to becoming a PFL champion and capturing $1 million in prize money.

“The excitement of the Professional Fighters League’s final four is unmatched in sports. The stakes for the fighters could not be higher as they compete for spots in the $1 million world championship bouts,” said PFL CEO Peter Murray. “Not only will 550 million MMA fans around the world witness win-or-go-home Playoff action, but they will see some of the best fighters the PFL has to offer showcased.”

Fighters from the first two of six divisional final four brackets will compete at the first playoff event on Aug. 13, broadcast live across ESPN2 and ESPN+, with former world champions Ray Cooper III and Rory MacDonald facing off in the highly anticipated main event. Magomed Magomedkerimov will look to follow up on his 2018 PFL welterweight championship when he takes on Joao Zeferino in the semifinals to round out the welterweight division bracket.

In the playoffs, fighters compete to advance to the 2021 PFL World Championship, the biggest night in MMA – with six title fights in one night, the winner of each will earn $1 million.

Professional Fighters League has quickly established itself as the No. 2 MMA company in the world. With the addition of world-class talent – from elite fighters to established business executives – and partnering with industry-leading brands such as Anheuser-Busch InBev, GEICO, DraftKings, BetMGM, Upper Deck, CarParts.com and Socios, the PFL continues to accelerate its global expansion.

On ESPN2 (simulcast on ESPN+)

Professional Fighters League (PFL) is the first and only to present MMA in the sports-season format where individual fighters compete in Regular Season, Playoffs, and Championship. PFL is the innovation leader with the PFL SmartCage delivering viewers on-screen fight analytics and real-time prop bets. The 2021 PFL Season began with 60 fighters in six weight divisions. The Playoffs commence with 24 fighters competing for 12 spots in the Championship event and one of six $1 million title purses. All PFL 2021 Playoff events are live in primetime on ESPN/ESPN2/ESPN+ in the U.S., as well as on leading broadcast and streaming outlets in 160 countries worldwide.