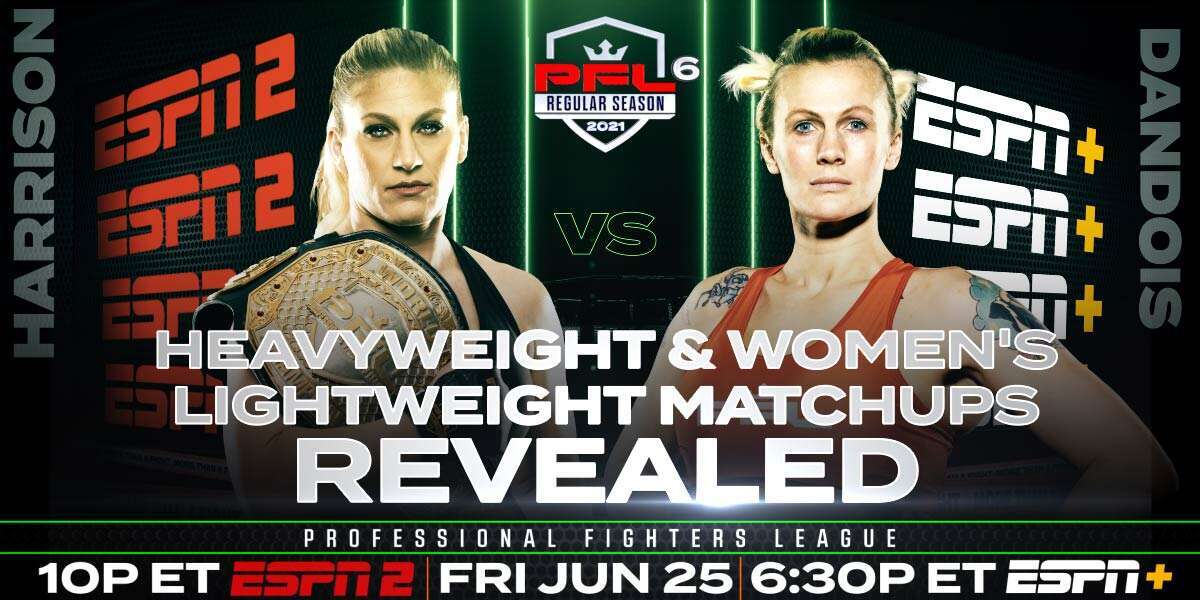 Kayla Harrison, Fabricio Werdum, Ali Isaev, and Denis Goltsov featured in PFL 6 main card as they look to punch their ticket into the playoffs

Win and advance, lose and go home tune in live on ESPN2, ESPN Deportes and ESPN+

NEW YORK (June 1, 2021) – The Professional Fighters League (PFL), the fastest growing and most innovative sports league, today announced its main event and full card matchups for PFL 6 on June 25 in primetime across ESPN networks and streaming platforms. After an event that featured an improbable upset from Renan Ferreira over Fabricio Werdum which has since been deemed a no decision, a dominant showing by Kayla Harrison, and record breaking performances by both Larissa Pacheco and Bruno Cappelozza at PFL 3, the path to the playoffs has gained significant intrigue heading into the final event of the Regular Season. Early finishes will be necessary as playoff spots are on the line in the heavyweight division after two first round and one second round finish at PFL 3.

The main event features women’s lightweight star Kayla Harrison is tied atop the division standings with six points after an impressive win over Mariana Morais via first round knockout. The 2019 PFL champion will look to carry that momentum into her bout with PFL newcomer Cindy Dandois. Dandois brings a wealth of combat sports experience into her bout with Harrison. The Belgian will likely need a stoppage in this must-win matchup to secure a spot in the women’s lightweight playoffs.

MMA Icon Fabricio Werdum will take on first round surprise Brandon Sayles who stopped Mohammed Usman at PFL 3. Werdum will need an early finish to secure a spot in the playoffs while a finish of any kind will likely springboard Sayles into the playoff fray.

Meanwhile, a win-or-go-home heavyweight clash between 2019 Heavyweight runner-up Denis Goltsov and Mohammed Usman, the younger brother of UFC champion Kamaru Usman will kick off the main card on ESPN 2. The two preseason favorites to make the playoffs in the division both know exactly what they need to do in the fight to make the playoffs and will likely need a stoppage to solidify their spot in the standings.

Rounding out the main card will be a heavyweight bout between Ferreira and 2019 PFL champion Ali Isaev, who will be making his 2021 debut after missing out on the first half of the regular season due to travel issues. Both fighters will be gunning for an early finish with Ferreira having just one point and Isaev entering with minus one point. The 2019 PFL heavyweight semifinalist Denis Goltsov, who is coming off an exciting first round knockout win in PFL 3, will look to do the same against Ante Delija.

Not to be overlooked is Brazilian phenom Bruno Cappelozza, who secured the fastest stoppage in PFL heavyweight history against Ante Delija, will go up against Muhammed Dereese. Dereese will have to take out Cappelozza early if he wants a shot at making the playoffs. Larissa Pacheco, who set a PFL women’s lightweight record for the fastest stoppage with a 51-second knockout over Julija Pajic, is tied with Kayla Harrison for first place in the standings and will square off against the battle tested Dandois.

“There were a lot of exciting knockouts that took place during PFL 3 for the heavyweight and women’s lightweight divisions and as the Regular Season concludes, all these fighters will be looking for an early stoppage to secure their spots in the playoffs,” said PFL President of Fighter Operations, Ray Sefo. “Many of our world class athletes can still qualify for the PFL playoffs but just about all of they are facing a win or go home scenario. I can’t wait to watch what happens next on June 25.”

PFL 6 is the last chance for the heavyweight and women’s lightweights to earn a playoff spot during the PFL regular season. With six weight divisions (featherweight, lightweight, welterweight, light heavyweight, women’s lightweight, heavyweight) the top four fighters with the most points in each division will make the playoffs. In the playoffs, fighters compete to punch their ticket to the 2021 PFL world championship, the biggest night in MMA – 6 title fights in one night, the winner of each earns $1 million. 60 fighters started the season – only 24 will qualify for the playoffs.

Professional Fighters League has quickly established itself as the No. 2 MMA company in the world. With the addition of world-class talent – from elite fighters to established business executives – and partnering with industry-leading brands such as Anheuser-Busch InBev, GEICO, DraftKings, CarParts.com and Socios, the PFL continues to accelerate its global expansion. Sports fans across more than 160 countries around world will be able to tune in to PFL 6 and witness the action on June 25 in Atlantic City, NJ.