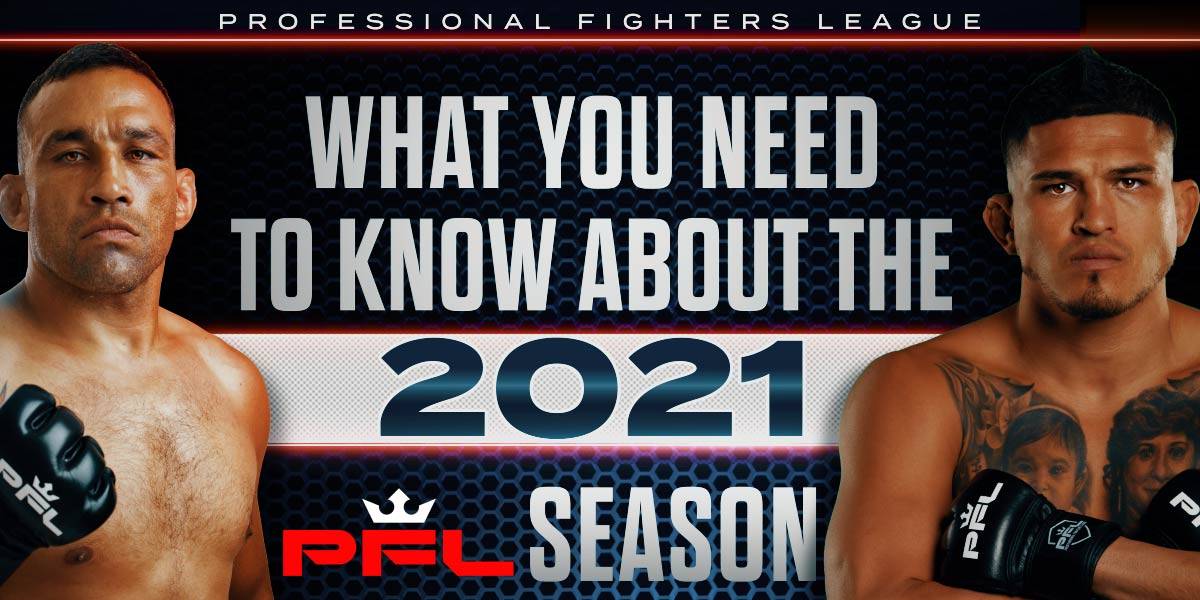 PFL 2021 Season: Everything You Need to Know

It’s back! The Professional Fighters League (PFL) kicks off its explosive third season on Friday, April 23. Let’s take a look at the details and key changes for the upcoming year of MMA action.

It’s More Than a Fight... It’s a Season pic.twitter.com/5FiAtwOGbn

The season will consist of 10 events across six weight classes (men’s featherweight, lightweight, welterweight, light heavyweight and heavyweight, as well as women’s lightweight). The first six events will constitute the regular season where each fighter will compete in two, three-round bouts. Following the regular season, three single-elimination playoff events will take place, with the winning fighters advancing to the end-of-year championship event. A five-round title fight will determine the World Champion in each of the six divisions. A $1 million dollar prize also awaits each of the six fighters who come out victorious.

6️⃣ Divisions. Each Crowning a Champion and Awarding a $1 Million Check! 👑💰 pic.twitter.com/zI1i4bEOkn

Scoring and Changes to MMA's Only Sports Season Format

This season, only the top 4️⃣ in each weight division advance to the 2021 PFL Playoffs! pic.twitter.com/INc7T98zRS

Fighters will earn three points for each victory during the regular season, with one point being awarded for draws. No points are earned in losses. Bonus points are awarded for finishes. First-round stoppages earn an additional three points, two points are given for fights stopped in the second round, and a single point is accumulated for third-round finishes.

Walkover wins — where the opponent could not compete — technical decisions and disqualifications will be treated like decision victories and will be awarded three points. If a fight is ruled a no-contest, each fighter will be awarded one point.

As with past PFL seasons, elbow strikes (on the ground, standing or in the clinch) are not allowed at any time.

The full PFL rules, as well as tiebreaking scenarios can be viewed here.

Run Up The Points In The Regular Season To Make It To The PFL Playoffs pic.twitter.com/r3ghirxkVL

Fighters who fail to make weight during the regular season and do not compete will be given a one-point penalty in the standings, a walkover loss (no points), and will not receive any financial compensation.

If the fight does take place (pending commission and opponent approval), the fighter who missed weight cannot earn points, regardless of the outcome of the bout. They will still be given a one-point penalty in the standings and a walkover loss (no points), plus a 20-percent fine of their contracted fight purse, which will be given to their opponent.

Should fighters become injured or miss weight during the regular season, the league will determine replacements at its discretion. During the playoffs or championship, seeding will be used to identify the appropriate alternates.

The 2021 season will feature SmartCage™, a proprietary technology used to measure, compile and analyze real-time statistics, bio-metric data and more. The data will be provided to viewers during event broadcasts via Cagenomics™.

All events during the 2021 PFL season will be available in over 160 countries worldwide. In the U.S., PFL main cards air on ESPN 2 and ESPN Deportes at 9 p.m. ET, with preliminary-card action taking place on ESPN+ beginning at 5:30 p.m. ET. For additional broadcast details, click here.

Dates and details for the three playoff events and the end-of-year PFL Championship event will be announced at a later date.