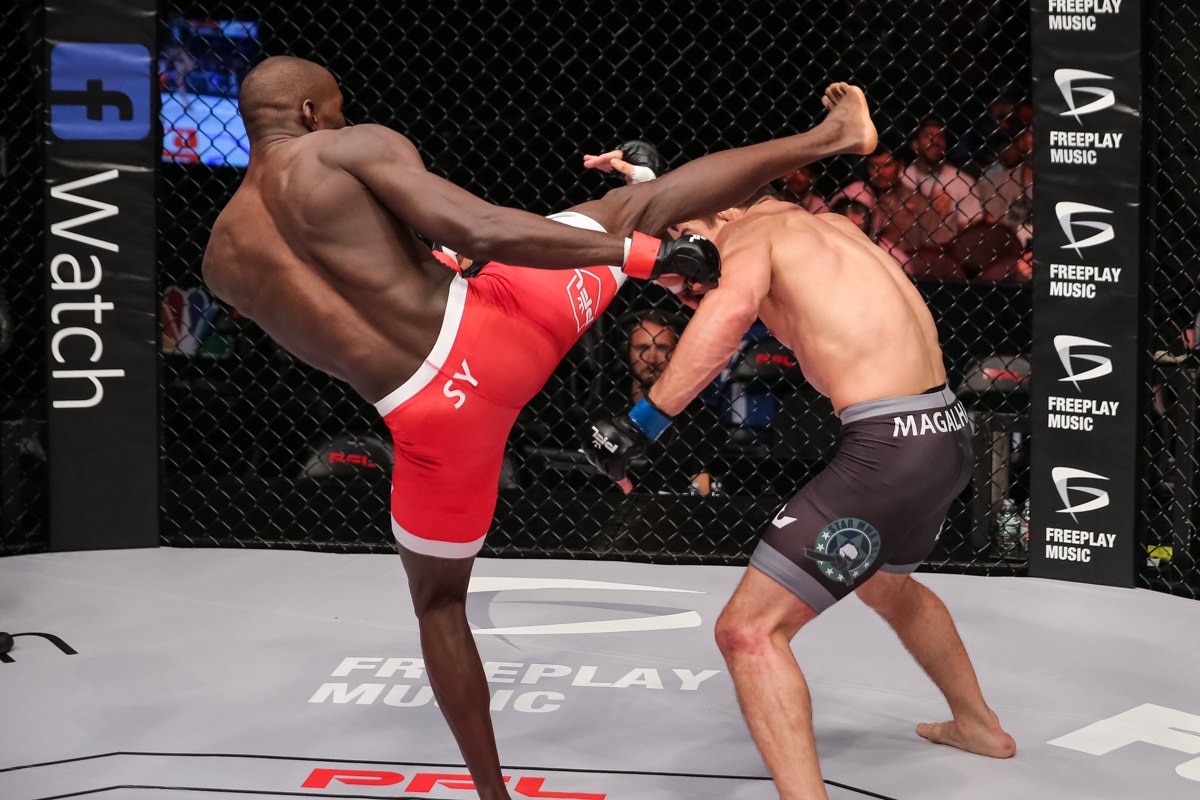 PFL Returns Top Fighters from PFL 2018 Season to Compete for Another Shot at the Title, Including Alex Nicholson, Chris Wade and Andre Harrison

The Professional Fighters League (PFL), the first organization ever to present MMA in the sport-season format of Regular Season, Playoffs, and Championship, today unveiled Round 2 of “The Selection,” fighters who will compete in the 2019 PFL season. Round 2 contains major contenders new to the PFL as well as top fighters returning to the PFL from last season.

New to the PFL is emerging star Jordan Johnson, who joins from the UFC. Johnson is a Light Heavyweight boasting an undefeated 10-0 record. Also new to the PFL is Zane Kamaka, who brings his 13-3 record to the Welterweight Division to compete against fellow Hawaiian and cousin, 2018 PFL breakout star Ray Cooper III. Luis Rafael Laurentino, a Featherweight of both Brazilian and Japanese descent, brings an impressive 33-1 record to the PFL, including an astounding 21 wins in 2013.

Several top fighters from the PFL 2018 season who fans expected to make the finals last year have returned to seek redemption for their playoff losses. Returning PFL fighters include: Long Island native Chris Wade (Lightweight) with his dynamic, aggressive style; Andre Harrison (Featherweight), whose only blemish on his 20-1 record was the PFL playoff loss to eventual PFL champion Lance Palmer; and Alex Nicholson (Heavyweight), whose jaw-dropping flying knee knockout in PFL 1 became an ESPN Top 10 classic.

“We are proud that PFL is the organization fighters want to be part of, as these guys have the talent and star-power to have chosen any MMA organization,” said Ray Sefo, President of PFL Fighter Operations. “PFL has only 68 slots this year for fighters, and the harsh reality is it is highly competitive to get into this league. Fighters from around the world want to control their own destiny, and after seeing six of their peers last year cash $1 million checks and win championship belts, they have come hungry to compete. Storylines are forming, rivalries are brewing, training is starting…and we’re not done yet. We will continue with round 3 of ‘The Selection’ as we finalize the PFL 2019 roster.”

Round 2 Highlights – The Selections:

Jordan Johnson joins the PFL from the UFC, where he won his last four fights. Johnson is a perfect 10-0 in his career and will look to continue his undefeated streak and claim the PFL Light Heavyweight title.

Smealinho “The Prince” Rama returns for the 2019 season looking to improve on his semifinal loss to eventual Light Heavyweight Champion Sean O’Connell. Rama has a career 11-5-1 record, and recorded the fastest punch of the 2018 PFL season at 32 mph.

Alex “The Spartan” Nicholson was one of the most wildly exciting fighters of 2018, with a jaw-dropping flying knee against Jake Heun that appeared on ESPN Top 10. His run to the Championship ended in the semifinals. Nicholson has a career 13-7 record, with 12 of those wins by knockout.

Kelvin “Mama’s Boy” Tiller was a crowd favorite in the 2018 season, combining knockout power with a big loving family that supported him at each fight. Tiller went 2-1 last season, winning by a knockout and submission before falling in the playoffs to Jared Rosholt. He has a 10-2 career record.

International newcomer Denis Goltsov has won 17 of his last 18 fights, 14 of them by stoppage. He has a career 22-5 record, including a five-year undefeated run between 2012-2017, culminating with arguably the highest accolade on the Russian MMA scene – winning the ACB heavyweight crown.

“The Guv’nor” Ben Edwards is a former kickboxer with a 4-0 MMA record, each win coming by knockout. Edwards maintains the record for the fastest kickboxing tournament win in K-1 history, three first-round knockouts that took a total of 3 minutes and 28 seconds.

Newcomer David “Bulldawg” Michaud joins a stacked Welterweight Division. He sports a 15-4 career record, with 13 wins by stoppage. His last three fights are all wins by KO. Michaud has competed in UFC, Bellator, Legacy Fighting Alliance, and Titan FC over the course of his career.

Nicknamed “Waianae’s Bad Boy,” Zane Kamaka hails from Hawaii and joins fellow Hawaiian, cousin and former training partner Ray Cooper III in the PFL Welterweight Division.   Kamaka has a career 13-3 record and is riding a four-fight win streak.  He will have to overcome Cooper, who took the PFL by storm last season, and 2018 PFL Welterweight Champion Magomed Magomedkerimov.

Long Island Native Chris Wade went 2-2 last season, both losses coming to eventual Lightweight champion Natan Schulte. Wade is an MMA fan favorite with his dynamic, aggressive attacking style. Wade has a 14-5 career record, including a 5-2 record while fighting in the UFC.

Nate “Snake” Andrews is carrying an impressive nine-fight win streak to the PFL, having successfully defended his CES MMA title in dominating fashion. Like Ray Cooper last season, The Snake is not well known prior to the PFL, but the Rhode Island native is 15-1, all by KO or submissions.

Long Island native Andre “The Bull” Harrison was a perfect 20-0 heading into the semifinals last season when his streak ended against PFL 2018 season future champion Lance Palmer.   Harrison had previously defeated Palmer in 2017 for the WSOF title and will be looking for revenge and the $1 million prize.

Luis Rafael Laurentino is a 26-year-old phenom with a 33-1 record so far in his MMA career, which included fighting and winning an astonishing 21 times in 2013. The submission specialist, who is of both Brazilian and Japanese descent, fell in love with martial arts while living in Japan as a boy.

PFL will make its debut across ESPN platforms and ESPN+, the direct-to-consumer sports streaming service from The Walt Disney Company’s Direct-to-Consumer & International segment, on Thursday, May 9. Live coverage starts at 6:00pm ET on ESPN+, with the televised card airing on ESPN2 and ESPN Deportes (Spanish) starting at 9:00pm ET. The debut marks the beginning of an ESPN, ESPN+ and PFL agreement announced in February 2019.