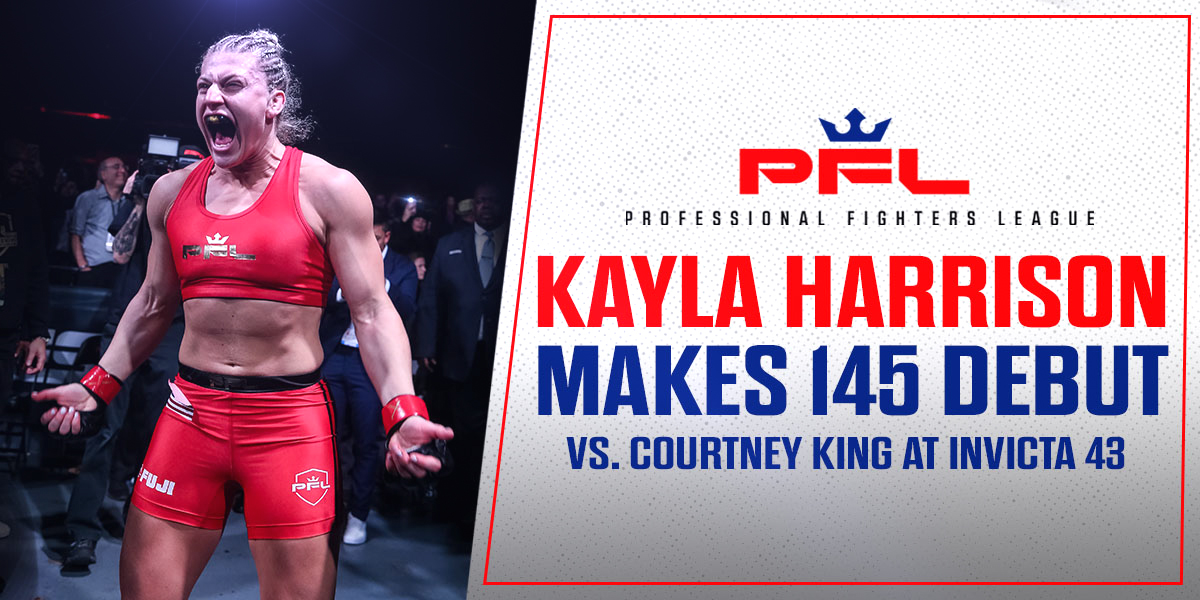 Harrison will Face Courtney King at Invicta 43 on November 20

NEW YORK (November 9, 2020): 2019 Professional Fighters League Women’s Lightweight Champion, Kayla Harrison is set to return to action on Friday, November 20 at Invicta 43 where she will square off with heralded Invicta featherweight, Courtney King (4-1) in the evening’s co-main event. Harrison (7-0) is a two-time Olympic gold medalist in Judo (2012 and 2016) and has been dominant since beginning her undefeated mixed martial arts career with the PFL in 2018.

“I have been on a mission to show I am the best fighter,” said Harrison, a two-time Olympic Judo gold medalist. “I have been tackling challenges my entire career and this bout at 145-pounds is a new and exciting one for me. I’m looking forward to competing in this new weight class and can’t wait to get back into the PFL cage come April.”

PFL is the first organization ever to present MMA in a true sports season format, with a Regular Season, Playoffs, and Championship. Harrison, 30, ran through her division en route to the 2019 championship, tallying four wins, including a pair of submissions, to claim the PFL title and the $1 million purse that came with it. The Judo legend, who has made all seven of her professional starts at 155-pounds, will be competing for the first time at 145-pounds when she steps into the cage with Invicta featherweight contender King.

“I am really excited to see Kayla compete for the first time at 145-pounds,” said PFL President of Fighting Operations, Ray Sefo. “She was a dominant champion at 155-pounds, and I look forward to her tackling another challenge on her journey to becoming one of the greatest fighters MMA has ever seen and I’m looking forward to her next run at PFL gold beginning in April.”

Invicta FC 43 takes place in Kansas City and airs live and exclusively on UFC Fight Pass at 7 p.m. CT. The event will be overseen by the Kansas Athletic Commission and will feature open scoring. With the ongoing pandemic, Invicta FC 43 will take place behind closed doors. As with any Invicta event, the safety of the athletes, their corners, staff and commission officials is of the utmost priority. All participants will be tested for COVID-19 prior to the event.

The PFL’s 2021 season will begin on April 23 on ESPN2. The remaining Regular Season events will take place on April 29, May 6, June 10, June 17, and June 25. Harrison will be joined by the 2019 PFL champions, including Welterweight Champion Ray Cooper III, exciting new contenders such as MMA superstar Rory MacDonald, lightweight’s Johnny “Hollywood” Case and “The Canadian Gangster” Olivier Aubin-Mercier, and reigning Brave FC Featherweight Champion Bubba Jenkins, and more for the upcoming 2021 PFL season.

About Invicta FC:
Invicta Fighting Championships (invictafc.com) is a world championship, all-pro mixed martial arts (MMA) fight series dedicated to providing female athletes with a major platform to hone their skills on a consistent basis. Founded in 2012 by longtime MMA executive Shannon Knapp, Invicta is committed to pioneering the future growth of women’s MMA by promoting the best possible match-ups between female competitors and identifying and developing future superstars of the sport. Follow Invicta on Twitter (@InvictaFights), Facebook (InvictaFights) and Instagram (@InvictaFC) for all the latest information.