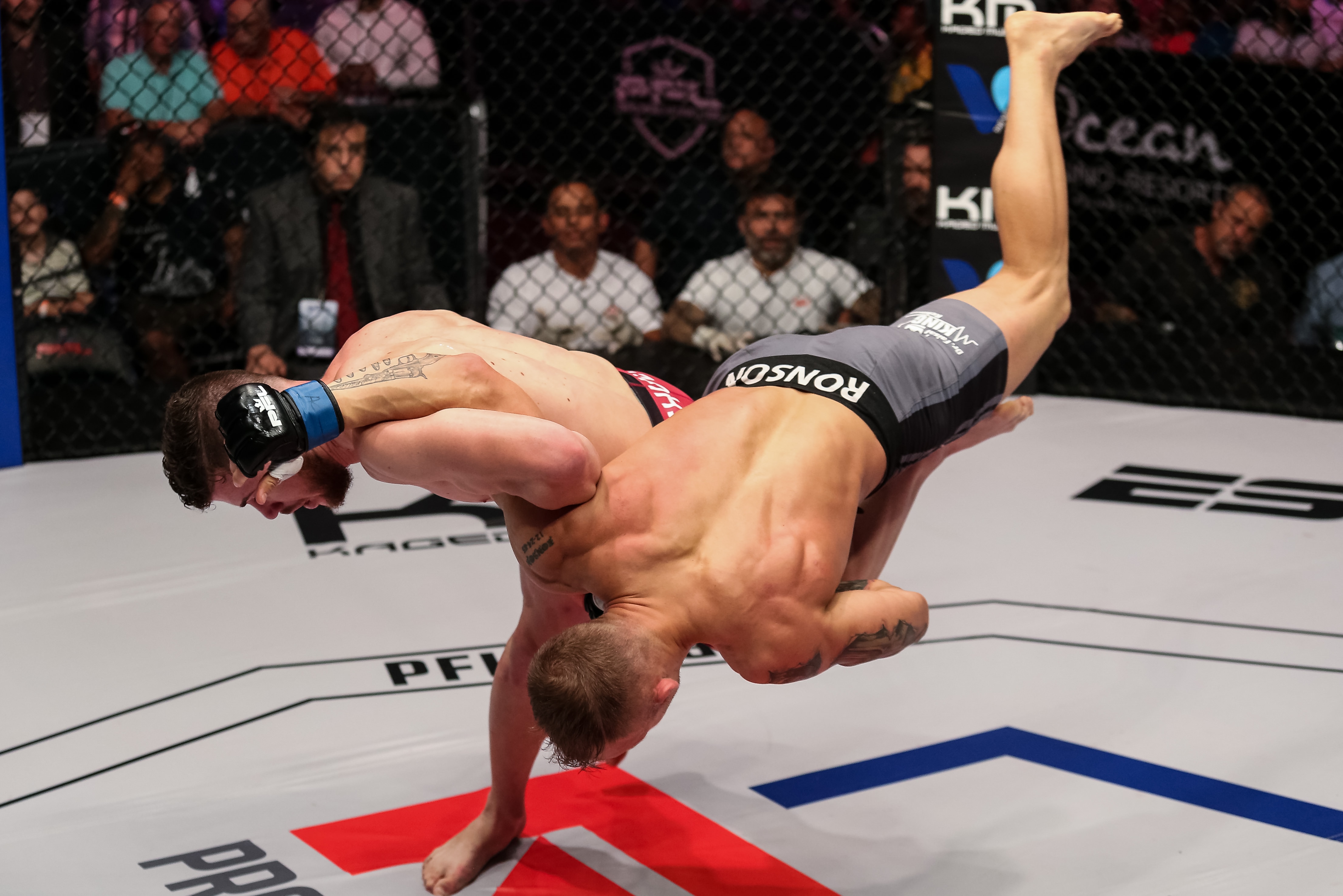 The Professional Fighters League (PFL), the first organization ever to present MMA through a Regular Season, Playoffs and Championship format, today unveiled the fight cards for the 2019 PFL Playoffs, which take place October 11, 17 and 31 at the Mandalay Bay Events Center in Las Vegas. For the first time ever in the fight capital of the world, MMA fans will experience fighters fighting twice in one night to reach the PFL Championship, where six elite athletes will earn their divisional championship belts and $1 million each.

“We’re proud to bring our electrifying Playoff format to the fight capital of the world and look forward to putting on three game-changing events in October,” said Ray Sefo, President of Fighter Operations, PFL. “Over the course of the 2019 PFL regular season, 44 fighters separated themselves from the competition and are a step closer to the title and million-dollar prize that awaits the champion from each of our six divisions. They now must rise to the occasion and fight with the intensity needed to survive and advance. It’s win or go home, it’s October madness.”

2018 welterweight champion Magomed Magomedkerimov has continued his undefeated reign over the division, with an unblemished 7-0 PFL record. He’s won in a variety of ways, including a Unanimous Decision win over his quarterfinal opponent Chris “Action Man” Curtis at PFL 4. Curtis has his shot at revenge in this rematch of a highly contested, thrilling fight. Another championship run will solidify Magomed as one of the best MMA fighters in the world. Last year’s runner-up Ray Cooper III finds himself on the same side of the bracket as Magomedkerimov, who handed Cooper a loss in the 2018 championship. In order to set up a rematch, he’ll need to get through Sadibou Sy, whose 17 second KO of David Michaud by liver kick at PFL 1 was the third-fastest stoppage in PFL history.

PFL newcomer and former UFC fighter Glaico Franca earned the #1 seed in the welterweight playoffs after knocking out Sadibou Sy at PFL 4 in a battle for the top spot. He’ll face #8 seed Andre Fialho. In the #4, #5 fight, John Howard will square up against David Michaud. Howard scored a stunning KO of Ray Cooper III in a win or go home fight at PFL 4, while Michaud bounced back in a huge way from his early defeat at the feet of Sy, securing a first-round TKO that also catapulted him to the Playoffs.

PFL 7 will start with two new fighter showcase matchups to be announced at a later date.

Featherweight and lightweight action features returning champions Lance “The Party” Palmer and Natan Schulte, both of whom locked in the #1 seed in their division. Palmer, a former four-time All-American wrestler at Ohio State University, is a perfect 7-0 in the PFL and is coming off his first career knockout win. He will take on #8 seed Gadzhi Rabadanov in the featherweight quarterfinals. 2018 featherweight semifinalist Andre Harrison takes on Alex Gilpin on the same side of the bracket. Harrison has only lost once in his career, to Palmer in last season’s playoffs. He’ll be looking to set up a rematch, but will need to get through Wisonsin native Gilpin, who choked out Brazilian jiu-jitsu black belt Freddy Assuncao with a standing guillotine at PFL 5 to lock in a playoff spot.

The other side of the bracket features #2 seed Movlid Khaybulaev, whose 10-second flying knee knockout of the year against Damon Jackson at PFL 2 sent shockwaves through MMA. He again connected with his patented flying knee against Harrison at PFL 5. He will face Daniel Pineda, a late addition to the PFL who has yet to fight this season, following a walkover win at PFL 5. #3 seed Luis Rafael Laurentino will face #6 seed Jeremy Kennedy in a rematch of their PFL 2 bout, which Laurentino ended in just 23 seconds with a 25.4 MPH head kick. Kennedy gets a shot at revenge after defeating 2018 featherweight runner-up Steven Siler in a win-or-go-home fight at PFL 5.

In the lightweight playoffs, Natan Schule will begin his repeat campaign against #8 seed Ramsey Nijem. Schulte has dominated his opponents to date, even securing the most takedowns of the season in a single fight with 12. #4 seed Akhmed Aliev takes on #5 seed Rashid Magomedov in a battle between two Russians who are technical strikers, strong grapplers and excellent wrestlers. Magomedov left the UFC with a winning record in the promotion to chase the $1 million PFL prize but fell short after losing to Schulte in the finals. A championship rematch is very much in play.

#3 seed Chris Wade has only lost twice during his time in the PFL, both to Schulte, one of which came in the 2018 semifinals. Wade is unbeaten this season, and faces #6 seed Nate Andrews, who he beat at PFL 2. #2 seed Islam Mamedov has not lost since 2009 and is carrying a 17-fight win streak into his fight against #7 seed Loik Radzhabov. An illness knocked Mamedov out of the playoffs last season.

New PFL light heavyweight and heavyweight champions will be crowned this year. Emiliano Sordi enters the light heavyweight playoffs as the #1 seed after finishing both of his regular season matches, one of which came against last season’s runner up Vinny Magalhaes, by KO and TKO. Sordi will square up against #8 seed Sigi Pesaleli. Sordi’s other knockout victory came against #4 seed Bozigit Ataev, who will face #5 seed Viktor Nemkov. Ataev has a 21-4 career record and will be looking to advance to the semifinals for the second straight season. Nemkov defeated Rakim Cleveland and Rashid Yusupov during the regular season, and clocked the fastest punch of the year at 30.6 MPH.

2018 light heavyweight runner-up Vinny Magalhaes recovered from a tough loss in dominating fashion, submitting Cleveland in under two minutes at PFL 6 to clinch the #3 seed in the playoffs. It was his fifth PFL finish in less than two minutes. He’ll square up against #6 seed Rashid Yusupov, who beat Mikhail Mokhnatkin in his first fight but dropped a split decision loss to Nemkov in his second. In a rematch from PFL 3, #2 seed Maxim Grishin will look to again defeat #7 seed Jordan Johnson. Johnson, who entered the 2019 PFL season from the UFC, suffered his first career loss at the hands of Grishin, but earned a clutch unanimous decision win at PFL 6 against Pesaleli to set up the rematch.

PFL newcomer and top seeded heavyweight Denis Goltsov has taken the league by storm, knocking out Jared Rosholt in the first round of his PFL debut, and then proceeding to have his way with Kelvin Tiller, peppering him with jabs before submitting him with an Ezekiel choke in the second-round to clinch the heavyweight top spot. He’ll face #8 seed and Olympic Judo Gold medalist Satoshi Ishii in the quarterfinal bout. Tiller finished the season as the #4 seed, having earned 6 points at PFL 3 with a first-round submission of Muhammed DeReese, and will face #5 seed Ali Isaev, a former Olympic wrestler from Russia.

The opposite side of the heavyweight bracket features a rematch between #3 seed Alex Nicholson and #6 seed Francimar Barroso. Barraso defeated Nicholson by split decision in a tightly contested, back and forth match. At PFL 6, Nicholson, in need of a win to make the playoffs, scored a first-round knockout at the expense of Zeke Tuinei-Wily, the 13th knockout of his career. Muhammed “Mo Muscle” DeReese lived up to his nickname at PFL 6, scoring a first-round TKO that catapulted him to the #2 seed. He’ll face #7 seed Rosholt, who defeated Ishii to clinch a playoff spot.

The Professional Fighters League (PFL) presents MMA for the first time in the sport-season format where individual fighters control their own destiny, competing in a regular season, playoffs, and championship.  PFL’s differentiated format and exciting fights sparked breakout growth for the league.  PFL regular season events are Thursday nights primetime live on ESPN2 and ESPN+.