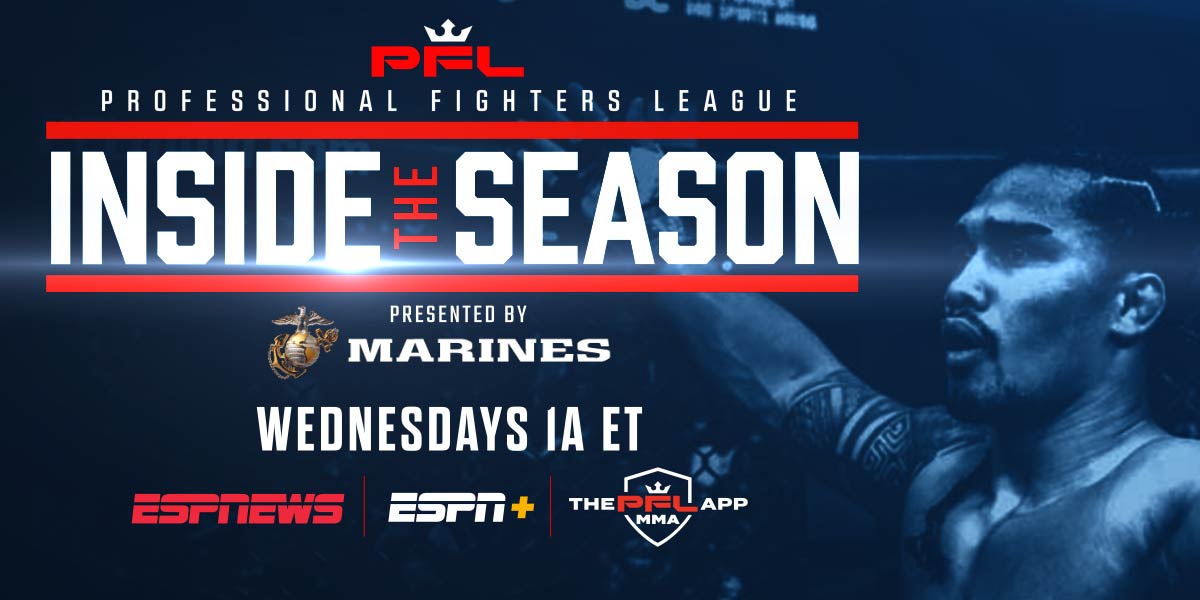 PFL STUDIOS ORIGINAL PRODUCTION INSIDE THE SEASON, PRESENTED BY THE MARINES, SET TO DEBUT ON ESPNEWS AND ESPN+

Inside The Season Will Air Wednesday’s on ESPNews at 1:00am ET, beginning September 16
and Concluding November 17; Each Episode Will Be Made Available on ESPN+

NEW YORK (September 15, 2020) – Professional Fighters League (PFL), the first organization ever to present MMA through a Regular Season, Playoffs and Championship format, today announced the launch of Inside the Season, one of four long-form original series produced by PFL Studios and aired across ESPN platforms. The 10-episode series, presented by The Marines and narrated by acclaimed actor and passionate MMA fan John C. McGinley, will air every Wednesday on ESPNews at 1:00am ET, beginning September 16 and concluding November 17. Each episode will also be available on ESPN+.

Inside The Season provides fans with unprecedented access and insight into the inevitable ups and downs of an eight-month season. New fighter interviews, never-before-seen fight footage, access to fighter locker rooms, takes from journalists, commentary from announcers, and voiceover from McGinley all contribute to a fresh, in-depth look at the 2019 PFL season.

“PFL Studios was created to provide MMA fans with powerful and thought provoking original episodic programming that brings the fan closer to the sport,” said George Greenberg, Executive Vice President and Executive Producer, Professional Fighters League. “Inside the Season takes fans along the emotional and physical journeys of our incredible athletes as they fight their way through a challenging Regular Season, Playoffs, and Championship format for a $1 million title. Collaborating with a talent like John C. McGinley is indicative of the high-quality level of work we’re looking to achieve at PFL Studios and the crossover appeal of MMA.”

“As a fan of the Professional Fighters League, it’s a privilege to help bring to life the 2019 PFL season through rich and impactful storytelling,” said McGinley. “I’ve always been fascinated by the dedication MMA fighters have to their craft and it’s even more impressive when you are competing in PFL’s season format. PFL Studios is bringing a much-needed fresh perspective to the sport, and fans will appreciate the in-depth look into each fighters’ journey.”

The Marines are the presenting partner of Inside the Season, leveraging the national platform and compelling content to engage with qualified youth considering a military career.

PFL Studios, launched in June, is a fully integrated global media division of the Professional Fighters League producing original MMA content for all platforms including television, digital and mobile. Inside the Season comes on the heels of Fantastic Finishes, a seven-episode series reliving memorable knockouts and slick submissions across all six PFL weight classes.

About Professional Fighters League
The Professional Fighters League (PFL) presents MMA for the first time in the sport-season format where individual fighters control their own destiny, competing in a Regular Season, Playoffs, and Championship.  PFL’s differentiated format and exciting fights sparked breakout growth for the league. PFL events are broadcast live in primetime on ESPN2 and ESPN+ in the United States and distributed to 160 additional countries around the world on premium sports networks.