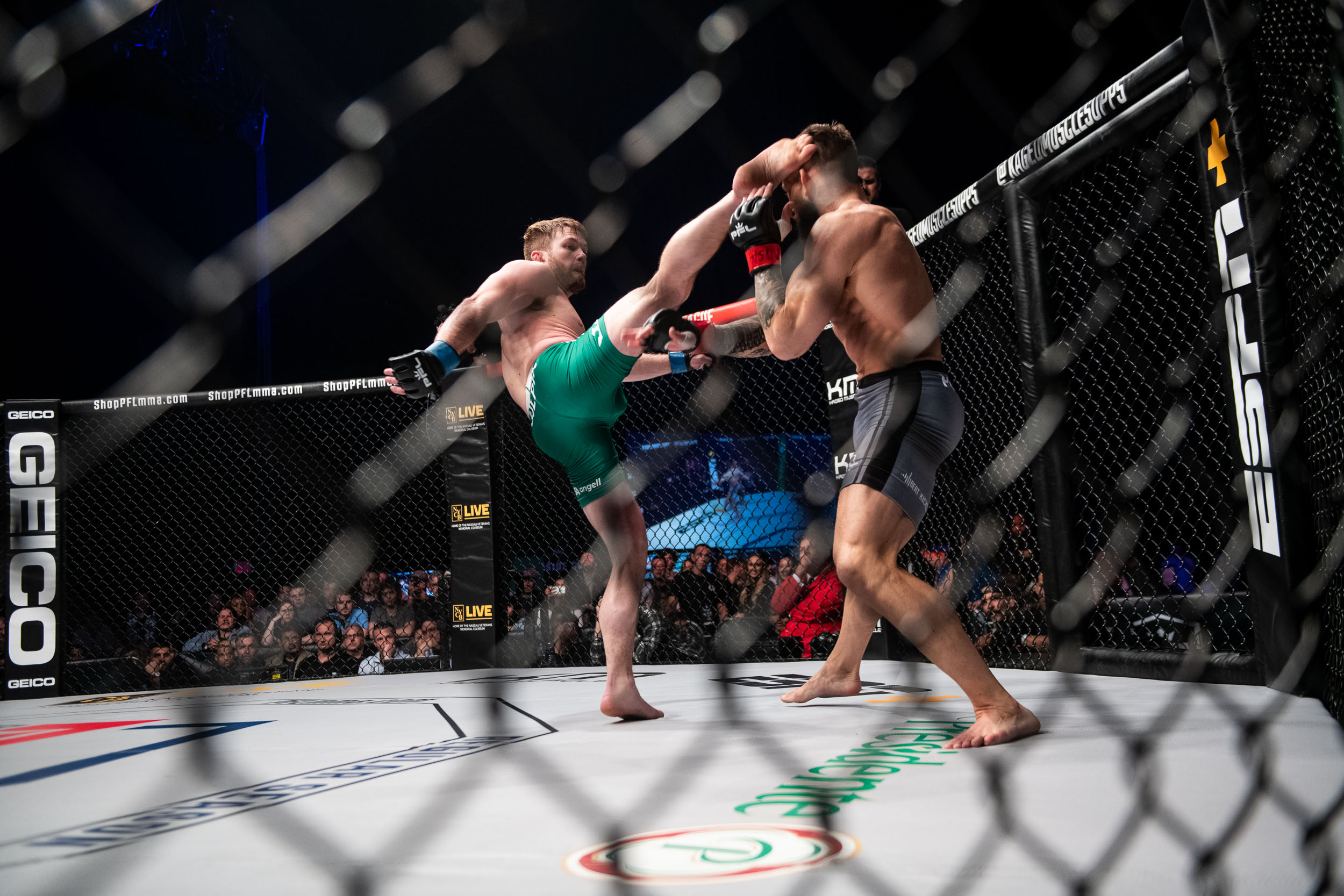 The Professional Fighters League (PFL), the first organization ever to present MMA through a Regular Season, Playoffs and Championship, returns to NYCB LIVE, home of the Nassau Veterans Memorial Coliseum, on Long Island, N.Y., for PFL 3 on Thursday night, June 6. PFL 3 concludes the first half of the regular season, and fireworks are expected as the Light Heavyweights and Heavyweights have the highest early stoppage rates in the PFL at 92% and 73% respectively.

PFL 3 begins at 7:00 p.m. ET on ESPN2 and the ESPN App (in Spanish), then the action continues on ESPN+ at 9:00 p.m. ET. All matches on ESPN+ are also available in Spanish. The PFL will again integrate its SmartCage and Cagenomics technology to the broadcast experience, delivering dynamic, real-time data and analytics on fighters’ performance that brings fans inside the cage like never before.

Vinny Magalhaes, a former Jiu Jitsu World Champion, returns seeking the Light Heavyweight title and million-dollar prize that escaped him last season. In 2018, Magalhaes finished his first four opponents, each in less than 2 minutes, en route to the PFL Light Heavyweight Championship final[RDJ1], where he fell to Sean O’Connell. He led the PFL in submissions (3) and was tied for the lead in stoppages (4), and will begin his 2019 campaign versus Argentina’s Emiliano Sordi, who had the fastest stoppage of the 2018 season – a 0:16 KO of Jason Butcher.

Undefeated Light Heavyweight Jordan Johnson makes his highly anticipated PFL debut against Russian fighter Maxim Grishin, who won both of his 2018 regular season fights by stoppage. Johnson holds a perfect 10-0 career record and joins the PFL from UFC[RDJ2]. He last fought in September of 2018, a fight he took against a Russian opponent, in Russia, on short notice, at a lower weight class (Middleweight). In Moscow, with his wife Stefanie in the crowd, Johnson defeated Adam Yandiev by 2nd round submission to stay unbeaten.

In Heavyweight action, one of the most exciting fighters from the 2018 season, Alex “The Spartan” Nicholson, makes his return. All four of Nicholson’s fights in 2018 ended in knockout, with Nicholson coming out on top in two of them. His flying knee KO at PFL 1 last season was one of the highlights of the year across all of MMA. Nicholson clashes with the man who earned the #1 heavyweight seed after the regular season last year – Francimar Barroso. The Brazilian secured two first-round stoppages to claim the top spot but was upset in the quarterfinals.

PFL newcomer Satoshi Ishii joins Kayla Harrison as Olympic Judo Gold medalists competing in the PFL. Ishii won Gold at the 2008 Beijing Games representing Japan. He has 10 wins by submission, and he’s already been busy this year, notching 3 victories. He will face another PFL newcomer in Zeke Tuinei-Wily, a former defensive tackle for the University of Utah. The “Samoan Rhino” has a 3-1 career record.

Calling the live action for PFL 3 will be play-by-play announcer and 2018 PFL Light Heavyweight champion, Sean O’Connell. Alongside O’Connell serving as color analysts will be UFC Hall-of-Famer, Randy “The Natural” Couture, and former UFC Lightweight, Yves Edwards. Caroline Pearce will host the nights action, and former WWE Ring Announcer Lilian Garcia will introduce fighters to the cage as the In-Cage Announcer of the PFL.

ESPN.comcoverage of PFL 3 includes a feature story on Jordan Johnson from Myron Medcalf. ESPN.com will provide live recaps and results as the fights take place.

MMA fans can sign up for ESPN+ at www.espnplus.com or through the ESPN App.

The ESPN social team will again bring fans images, stories and information throughout the week and weekend, on the @ESPNMMA handles on Twitter, Facebook, and Instagram.

The Professional Fighters League (PFL) presents MMA for the first time in the sport-season format where individual fighters control their own destiny, competing in a regular season, playoffs, and championship.  PFL’s differentiated format and exciting fights sparked breakout growth for the league. PFL events are Thursday nights primetime live on ESPN2 and ESPN+.

PFL is backed by an investor group of sports, media, entertainment, and business titans.  Watch PFL live Thursday nights in the U.S. on ESPN2, ESPN+, ESPN Deportes. PFL is also available in 130 countries around the world with leading local broadcasters.

ESPN+ is the multi-sport, direct-to-consumer video service from The Walt Disney Company’s Direct-to-Consumer and International (DTCI) segment and ESPN. It reached 2 million subscribers in less than a year and offers fans thousands of live events, on-demand content and original programming not available on ESPN’s linear TV or digital networks, along with premium editorial content.

Programming on ESPN+ includes hundreds of MLB and NHL games, exclusive UFC, Top Rank boxing and PFL fights and events, top domestic and international soccer (Serie A, MLS, FA Cup, UEFA Nations League, EFL Championship, EFL Carabao Cup, Eredivisie, and more), thousands of college sports events (including football, basketball and other sports), Grand Slam tennis, international and domestic rugby and cricket, new and exclusive series, acclaimed studio shows and the full library of ESPN’s award-winning 30 for 30 films. Fans can subscribe to ESPN+ for just $4.99 a month (or $49.99 per year) and can cancel at any time.

ESPN+ is available as an integrated part of the ESPN App (on mobile and connected devices) and ESPN.com, the industry-leading all-in-one digital sports platform, delivering a rich, personalized experience to tens of millions of fans every month.

[RDJ1]I’m inserting this to distinguish between the title itself and the name of the match. If there’s a different way to make that distinction I’m all ears.