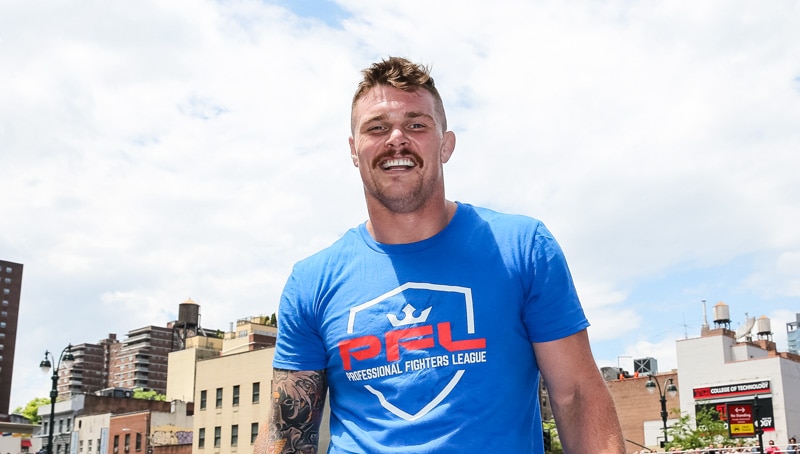 The Professional Fighters League (PFL), the first organization to showcase mixed martial arts in a true sport format, held their third regular-season event in front of a packed house at the Charles E. Smith Center, on the campus of The George Washington University. Thousands of PFL fans came together to see what the welterweight and middleweight cards had to offer, and they were not disappointed.

Jake Shields and Ray Cooper III had history with Shields splitting a pair of fights with Cooper’s father Ray Cooper Jr. in 2002 and 2004. The younger Cooper, looking to settle the score with Shields, blasted away at the venerable welterweight right from the opening bell. He cracked Shields with a right hand that opened up a cut above his left eye and left Shields completely on the defensive. Cooper moved in and finished Shields in the second with a vicious ground and pound assault that forced the referee to intervene, sealing the massive upset.

Abubakar Nurmagomedov, a Russian native and cousin of current UFC lightweight champion Khabib Nurmagomedov, fell to fellow welterweight Pavlo Kusch in another stunning upset. Kusch dueled with Nurmagomedov for the first round in a back-and-forth affair but in the second frame Kusch landed a big shot that the Dagestani could not recover from. Kusch pounced on his wobbled foe and sunk a fight-ending rear naked-choke for the five-point win.

“As a DC native, I could not be more thrilled with the action the PFL brought to our Nation’s Capital tonight,” said Carlos Silva, League President of the PFL. “The League continues to showcase top-quality fights filled with highlight-reel finishes as the fighters compete for their spot in the post-season.”