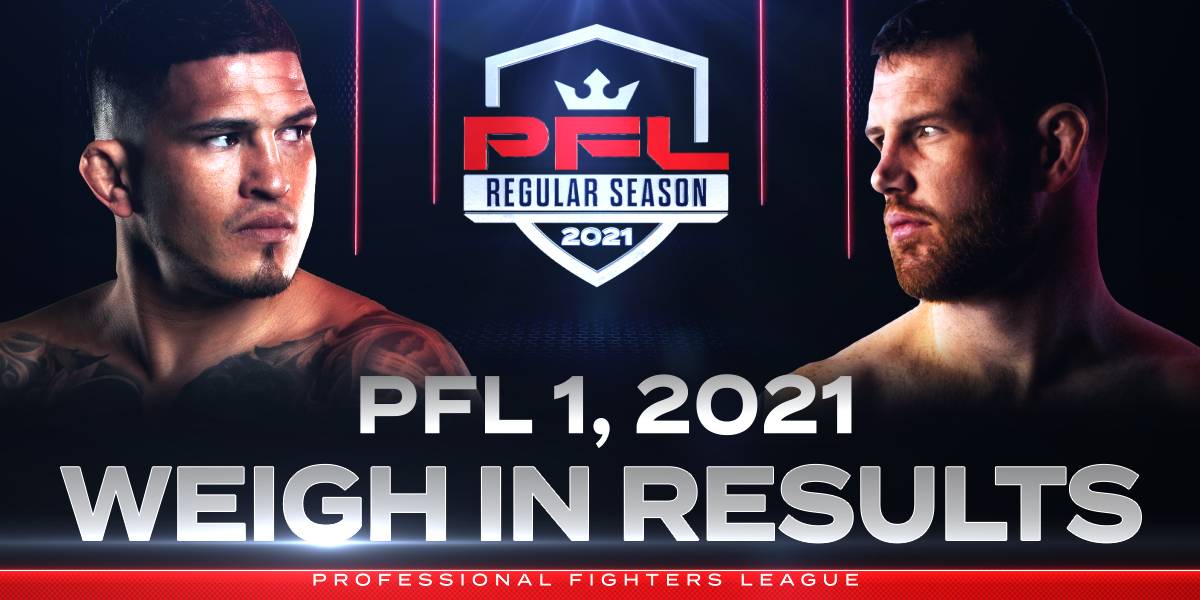 On Thursday, April 22, the Professional Fighters League held the weigh-ins for its first event of the 2021 season from the Ocean Casino in Atlantic City, N.J.

The season’s first event features action in the featherweight and lightweight divisions. It includes the league debut of former world champion Anthony Pettis, who tipped the scales at 156 pounds for his headlining affair against Clay Collard. Collard also hit his mark, weighing in at 154.6 pounds for the main event.

Returning two-time PFL champions Natan Schulte (156) and Lance Palmer (145.4) both made weight for their first bouts in their respective quests to become three-time champions. Their opponents, Marcin Held (155.8) and Bubba Jenkins (146), were also on weight for the action-packed main card.

Lightweight Mikhail Odintsov missed the lightweight limit of 156 pounds, coming in at 156.4 for his scheduled matchup with Akhmed Aliev (155.2). Per the PFL rules, Odintsov will receive a one-point penalty in the regular season standings and cannot earn any points in the bout with Aliev. Additionally, he will forfeit 20 percent of his fight purse to Aliev, who automatically earns three points in the standings. Aliev will have the opportunity to earn up to three more points during fight, pending the fight outcome.

The 10-fight card kicks off tomorrow night, April 23, with a preliminary card airing live on ESPN+ beginning at 5:30 p.m. ET. The main card will be broadcast on ESPN 2 and ESPN Deportes starting at 9 p.m. ET.

Below are the full results of the event’s weigh-ins:

* - Odinstov missed weight and was penalized one point in the standing. He also forfeits 20 percent of his fight purse to Aliev.