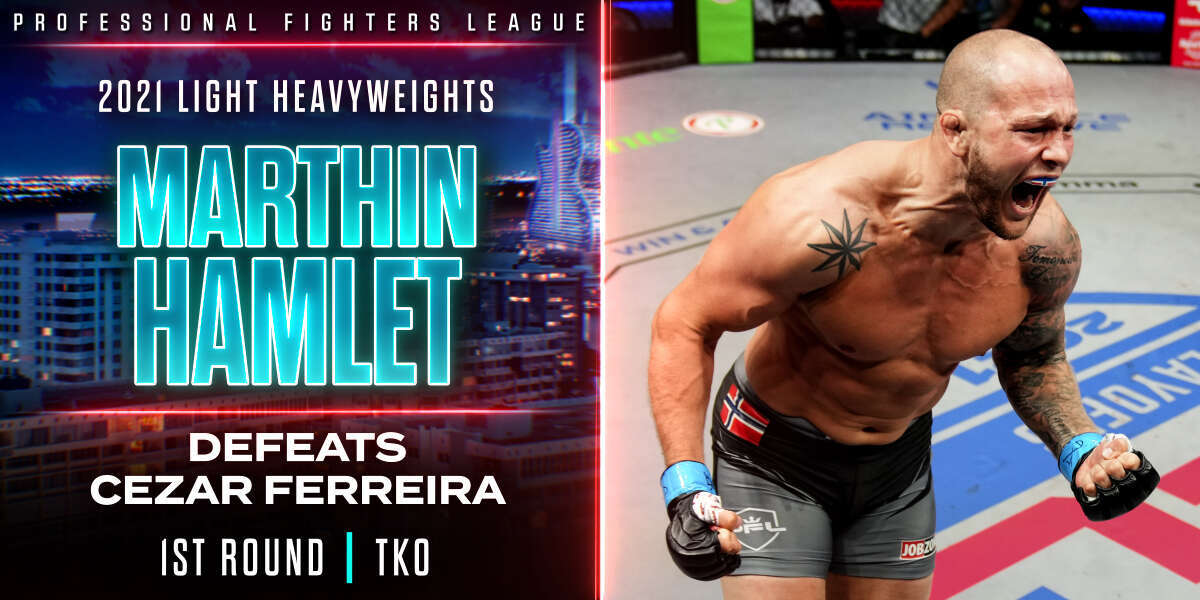 The PFL main card kicked off with the first semifinal of the night coming in the light heavyweight division between No. 2 seed Cezar Ferreira and No. 3 seed Marthin Hamlet. Both men had a spectacular finish during the 2021 Regular Season to cement their places in the Playoffs. Now, a shot at reaching the $1 million PFL World Championship bout is on the line.

Ferreira (14-9) earned a spectacular first-round knockout over Nick Roehrick in his PFL debut only to fall short in a decision loss to Chris Camozzi. However, it was that 37 second win -- the second-fastest knockout in PFL Light Heavyweight history -- that has opponents fearing "Mutante" in the postseason. Under the tutelage of MMA legend Vitor Belfort, Ferreira was the inaugural winner of TUF Brazil.

For Hamlet (7-2), who is carrying the pride of Norway on his back as the first fighter from his home country to compete in the PFL, the main card bout was an opportunity to get back in the win column after a submission loss to Cory Hendricks in June. Earlier in the regular season, Hamlet, a seven-time Norwegian wrestling champion, put his grappling to good use en route to a second-round submission of Dan Spohn.

Immediately after the opening bell, Ferreira fired off a heavy kick to the body of Hamlet. When the strike landed, Ferreira quickly reached for the hamstring on his plant leg and collapsed to the mat in a world of pain. Hamlet got on top of the injured Ferreira and landed some ground-and-pound until the referee stepped in to save the day.

It was an unfortunate ending to the semifinal bout, but Hamlet advances to the PFL World Championship where he will take on the winner of Antonio Carlos Junior vs. Emiliano Sordi -- which takes place later in the night. Hamlet used no energy in the fight and will be well-rested for his championship opportunity in October. Wishing Ferreira a speedy recovery.