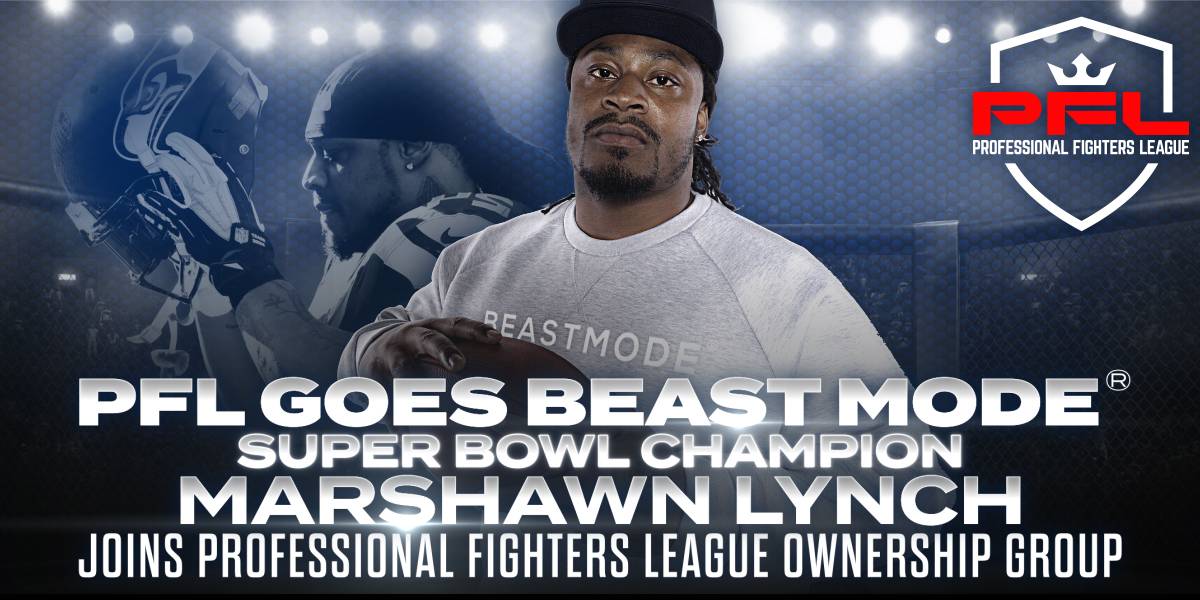 NEW YORK (April 29, 2021) – The Professional Fighters League (PFL), the fastest growing and most innovative sports league, announced today Super Bowl champion and former All-Pro running back Marshawn Lynch has invested in the league and will collaborate on efforts to continue the growth of MMA worldwide.

Lynch’s influence will be immediate as the league will announce the “BeastMode® MMA Fighter of the Night” following PFL MMA 2 tonight, airing in primetime across ESPN networks and streaming platforms, and one lucky fan will win a signed football and gloves. An anticipated apparel collection between the former Pro Bowler and company is also expected. Lynch joins PFL’s world-class ownership group, which includes Wiz Khalifa, Ted Leonsis, Kevin Hart, Brandon Beck and Mark Burnett.

“I’m really on that owner hype right now, ya feel me,” said Lynch. “Pro teams, leagues, companies and brands, I’m wit it. Ownership allows you to be closer to the action, to keep learning and making a difference. At the end of the day, the PFL opportunity is another blessing, that’s all I can really say. PFL is the future of MMA and it’s always a win-win when you can work with like-minded folks.”

“The Professional Fighters League is excited to welcome Super Bowl champion Marshawn Lynch to our world-class sports ownership group,” said PFL CEO, Peter Murray. “BeastMode’s winning spirit and passion to build disruptive and innovative companies in sports is the perfect fit for PFL and MMA, which is the fastest growing sport in the world with 550 million plus fans and the youngest fanbase of all major sports.”

The remaining Regular Season events will take place on May 6, June 10, June 17, and June 25, and will be available across ESPN networks and streaming platforms.

Professional Fighters League has quickly established itself as the No. 2 MMA company in the world. With the addition of world-class talent – from elite fighters to established business executives – and partnering with industry-leading brands such as Anheuser-Busch InBev, GEICO, CarParts.com and Socios, the PFL continues to accelerate its global expansion.

About Professional Fighters League
Professional Fighters League (PFL) is the first and only to present MMA in the sports-season format where individual fighters compete in Regular Season, Playoffs, and Championship.  PFL is the innovation leader with the PFL SmartCage delivering viewers on-screen fight analytics and real-time prop bets.  PFL Roster is second to none with 25% of its fighters ranked in the top 25 in their weight-class.  All PFL 2021 Season events are live in primetime on ESPN2/ESPN+ in the U.S. (typically on Thursdays), as well as on leading broadcast and streaming outlets in 160 countries worldwide.

About Marshawn Lynch
Marshawn Lynch is one of the most successful NFL Athletes on and off the field. Since 2015, his BeastMode® business has grown to include apparel, retail stores, a marketing agency, and live events. Proving himself an astute, enterprise building entrepreneur, Marshawn has entered the legalized Cannabis category with the launch of Dodi™, and has advisory positions and ownership stakes in pro teams and leagues, companies and brands – Blok Sports, Fan Controlled Football, USL’s Oakland Roots and now PFL. Marshawn is also the founder of the Fam 1st Family Foundation, an Oakland-based philanthropic organization whose focus is the betterment of young black lives within the community. More can be learned at: beastmodeonline.com, dodiblunts.com, and fam1stfamilyfoundation.org.