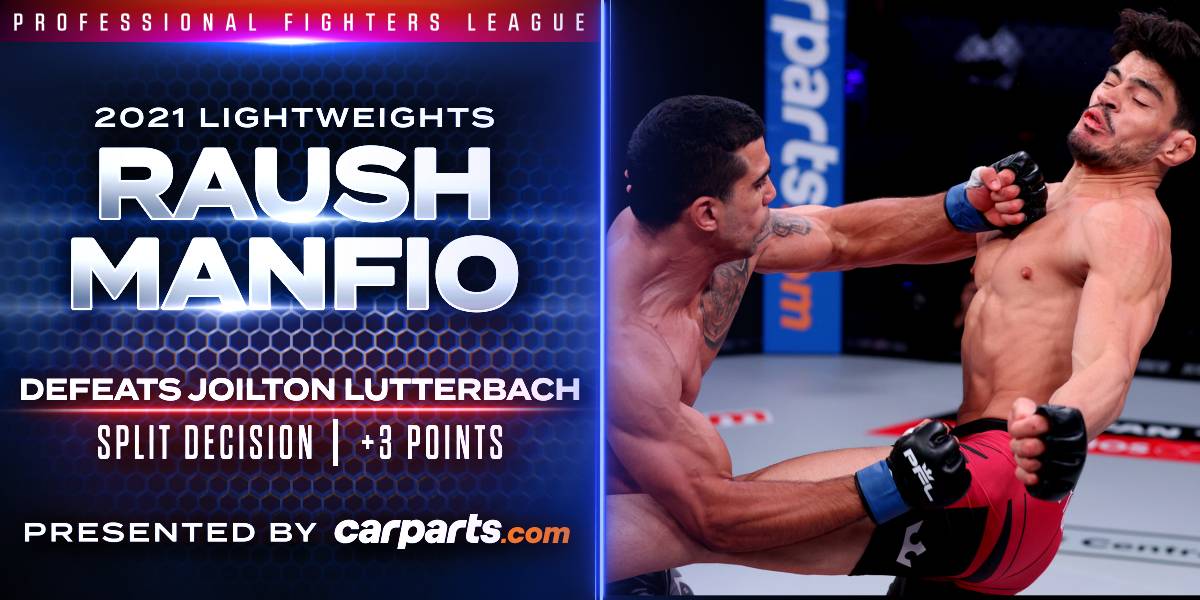 A pair of Brazilian lightweights collided on the undercard of the first event of the 2021 PFL season as the German-based Joilton Lutterbach (34-9) took on Raush Manfio (13-3). Both fighters were making their league debuts with the experienced Lutterbach having the most fights of anyone on the lightweight roster. Manfio recently spent time as a sparring partner for Jake Paul in preparation for his boxing match with Ben Askren.

A left hook from Lutterbach caught Manfio off balance early. He used his length to attack the legs of Manfio. A counter left hand from Manfio landed flush and Lutterbach was stunned for a moment. Lutterbach continued to look for his left body kick, but he left his chin exposed on more than one instance for counters from Manfio. A level change from Lutterbach was stuffed by Manfio and the pair separated. Lutterbach pawed at his right eye late in the round, but Manfio did not take advantage. The round closed with a solid exchange near the fence.

Manfio scored with yet another counter left hand to start the second round. Lutterbach answered with a takedown to bring the fight to the ground for the first time. The output of Lutterbach was steady from the top position. Manfio offered little resistance from his back, so Lutterbach was able to work from the guard. When Manfio looked to scramble to his feet, Lutterbach transitioned to his back. With a minute left in the round, Manfio worked back to standing. A combination from Manfio found the mark along the fence, but Lutterbach took it well. Manfio closed the stanza with a spinning kick to the body.

Lutterbach flicked his jab with success to start the last frame. He got too aggressive and Manfio cracked him with a counter right hand that sent Lutterbach flying. That prompted Lutterbach to clinch and work for a takedown. Manfio was able to stay upright and separate, but it was short lived. Lutterbach secured a body lock and dragged Manfio to the mat. Manfio worked back to his feet and the pair continued to trade shots. A left from Lutterbach was met with a right from Manfio. Neither fighter gave an inch in the fight’s waning moments and the judges were needed to determine a winner.

The judges were split in their decision, with Manfio eking out the win. He claimed three points in the lightweight standings with the result.