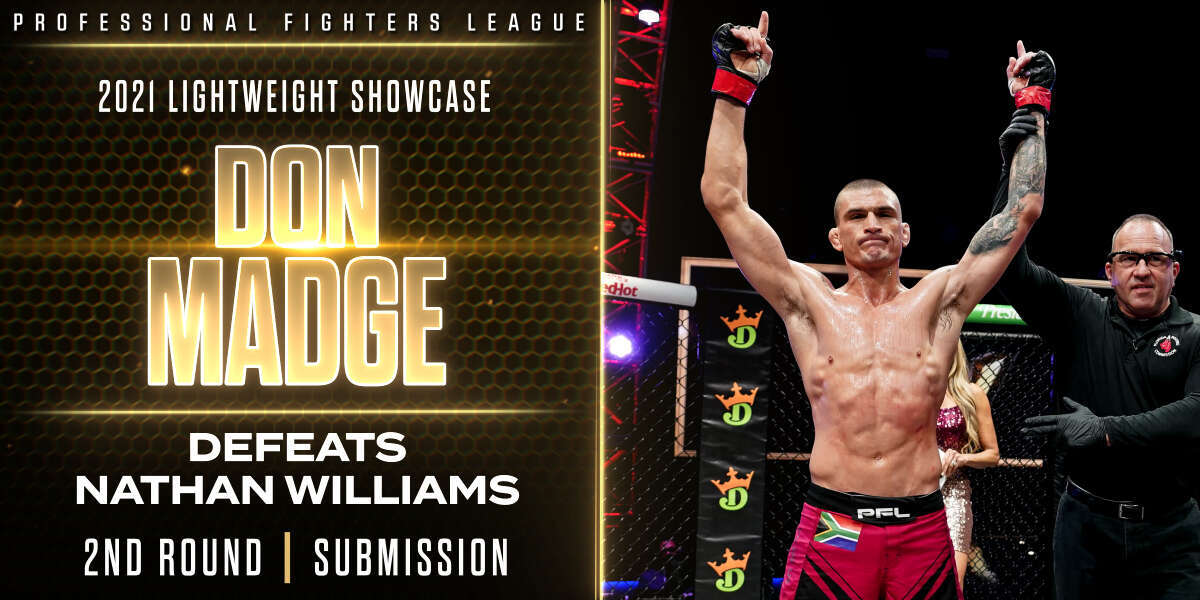 Don Madge and Nathan Williams kicked off the biggest night in PFL history – the 2021 PFL World Championship – in style.

Setting the stage for a night featuring six title fights (and six shots at $1 million as a result) plus the return of two-time Olympic gold medalist boxer, Claressa Shields.  Madge and Williams brought the heat from the Seminole Hard Rock Hotel & Casino in Hollywood, Fl.

Here’s how the fight played out.

They touch gloves, and the event is officially underway. Madge slings a couple kicks early, and Williams catches, seizing the opportunity to drag his opponent to the mat. Williams works from the top, controlling Madge and looking to establish a dominant position.

Madge creates space nicely and scrambles back to his feet. They clinch against the cage briefly before breaking and returning to the center. Williams lands a nice low kick, and Madge responds with a one-two.

Williams digs a body kick before eating two jabs from Madge. Two minutes to go in the round, and Madge is looking more comfortable letting his hands go. He lands with a nice left hook to the body then gets back to work with the jab.

Strong outside leg kick finds its mark for Madge, and Williams circles away. Madge cuts the angle and pins his foe to the fence, but Williams uses nice head movement to avoid damage before working back to the center of the cage. Superman punch lands from Williams, and Madge closes the round landing a nice one-two.

He flexes for the camera, clearly feeling confident heading into Round 2.

They come out swinging in Round 2, with both men landing early. Twenty seconds in, Williams shoots for the takedown, but Madge stuffs it nicely. He shrugs Williams away, and they return to striking range.

Williams catches another kick and trips Madge, landing back on top. Madge quickly locks in an omoplata, and while he can’t finish the submission, he uses it to sweep. Williams scrambles from the bottom, and Madge takes the opportunity to take his opponent’s back.

He sinks both hooks in, and the choke is set. This one’s over.

Williams is forced to tap out, and Madge’s PFL debut is a successful one.

After two years out of the cage and an abrupt end to a successful 2-0 run in the UFC, Madge proved he still has plenty to offer fight fans worldwide.

Williams was clearly game and presented some danger throughout the fight, but Madge’s grappling took over early in Round 2 and ended things in a flash.