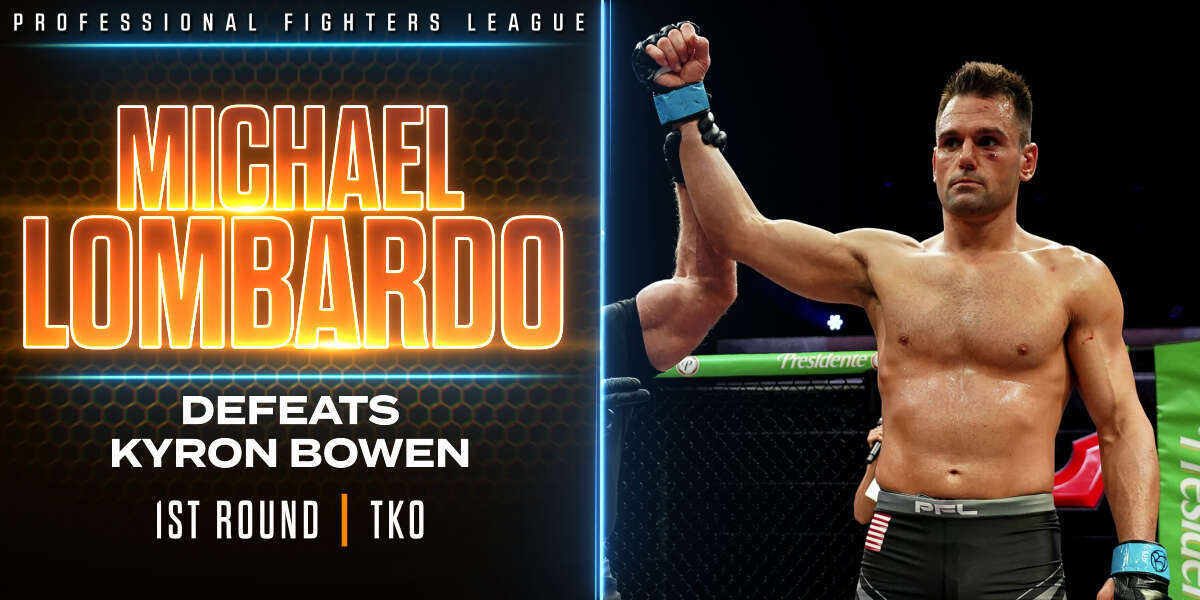 The PFL Playoffs 1, 2021 fight card rolled on Friday evening on ESPN+ with a non-Playoff welterweight showdown between Kyron Bowen and Michael Lombardo.

Bowen strolled into the bout with nine wins –– and nine stoppages, four coming in the first round. Lombardo, meanwhile, boasts six stoppages in 11 career victories and appeared on Dana White’s Contender Series twice, going 1-1 in those fights.

Here’s how the fight played out.

They take the center of the cage, and Lombardo fires away early, pressing Bowen toward the cage. Bowen, undeterred, counters and forces the action back to the center of the cage. They clinch briefly, with the 6-foot-2 Bowen landing three solid knees inside before separating. Overhand right from Lombardo misses, but he uses the momentum to push Bowen against the cage, where he works a body lock.

They separate, and Bowen circles away. Lombardo again looks for the overhand right, and it misses, giving Bowen the chance to return fire with a strong body kick. Lombardo continues to push forward, and he lands a nice 1-2 that appears to buckle Bowen. He follows with a low calf kick that puts Bowen on the mat. From there, Lombardo punches –– yes, punches! –– the calf of his downed opponent.

Bowen pops back up and lands a right hook, putting Lombardo on his heels temporarily. Lombardo finds the low calf kick again, though, dropping his foe for a second time in this first round. Bowen screams in pain, and Lombardo targets the calf again on his downed opponent, landing another kick that forces the referee to intervene.

“Leg kicks don’t finish fights,” eh? Tonight they did, as Lombardo found his target and hammered away, forcing the TKO stoppage via calf kicks.