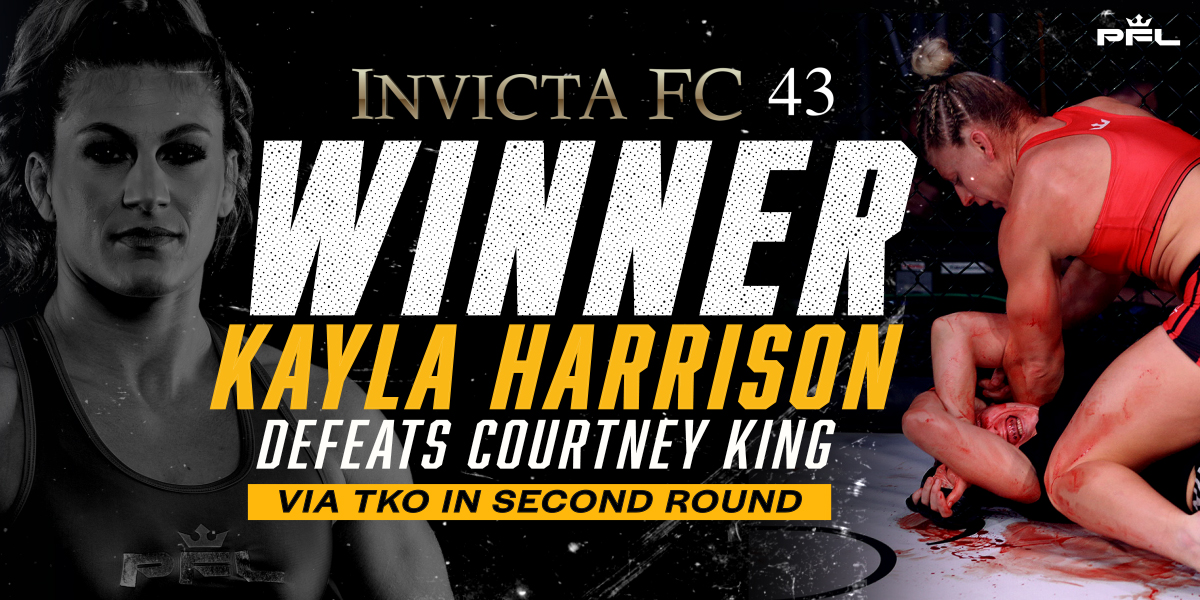 Two-time Olympic judo gold medalist and 2019 PFL Women's Lightweight World Champion, Kayla Harrison (8-0) made her debut in the featherweight division on Friday, Nov. 20, at Invicta FC 43. Harrison squared off against once-beaten Courtney “The Lion” King in the night’s main event.

COMING UP NEXT - @KaylaH takes on Courtney King in a featherweight clash! #InvictaFC43

Harrison added to her already notable resume with her sixth finish in her eight cage appearances. The 30-year-old – who trains at Florida’s American Top Team – needed less than two rounds to earn a TKO stoppage after a bloody battle with King.

The fight began with both fighters throwing a variety of kicks. The southpaw Harrison connected with a solid left hand before latching onto King’s left leg. The Colorado fighter was able to shrug off the attempt, but Harrison was able to force her to clinch along the fence. As they moved off the cage, Harrison used her judo to toss King to the mat. Once on top, Harrison unleashed a vicious onslaught of ground and pound from inside King’s guard. A heavy elbow opened a large gash between King’s eyes and blood painted the canvas. Harrison passed to the mount and increased her striking output. King, desperate to survive, rolled to her stomach, allowing Harrison to take her back with both hooks. As the round neared its end, Harrison attacked with an armbar along the fence, but King was able to defend and make it to the bell. All three judges at cageside scored the round 10-8 in favor of Harrison.

In round two, the PFL titleholder quickly took the fight right back to the mat. King was temporarily able to neutralize her from the bottom, prompting the referee to stand up the fight. It was short-lived, however as Harrison slammed King to the ground and began to pursue a finish. She passed to mount, then secured the crucifix. From the dominant position, Harrison delivered a steady stream of short punches that forced the referee to step in and halt the contest.

The victory sets up Harrison to not only reign over the 155-pound division, but also 145 pounds as well. She’s primed for a repeat PFL season performance in 2021, as the defending champion will have an opportunity to further test her skills beginning in April, as she aims to earn another $1 million dollar prize.