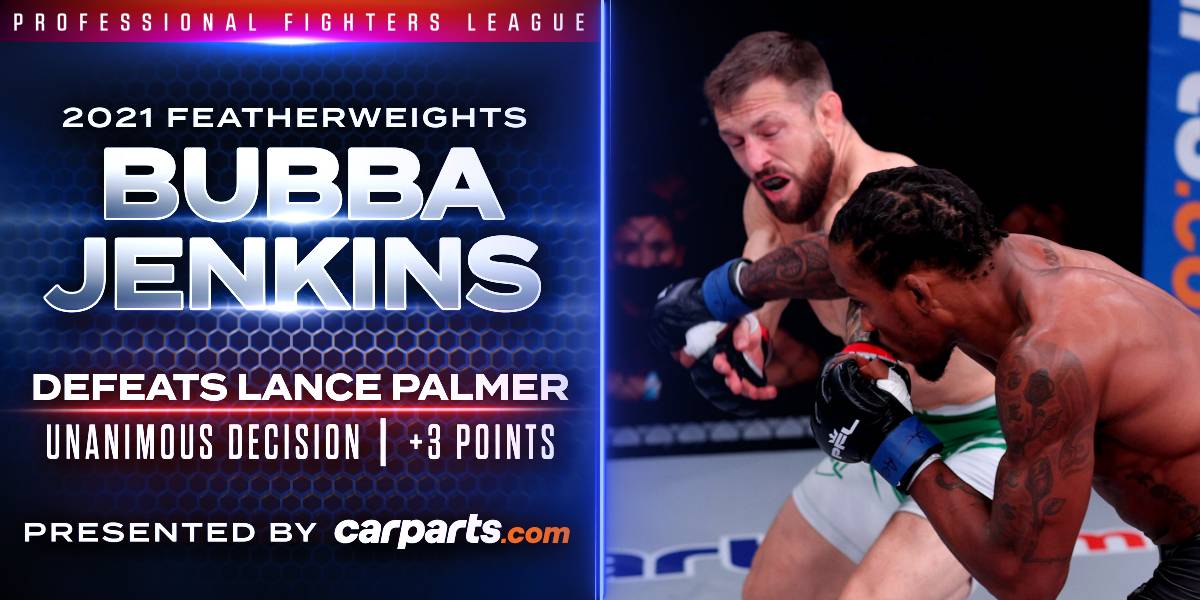 Featherweight newcomer Bubba Jenkins (15-4) opened his PFL career by dominating the force of nature known as Lance Palmer (22-4). Palmer entered the third PFL season riding a perfect 10-0 league record to go with his two championships and million-dollar prizes, but Jenkins quickly showed it is a new game in 2021. The wrestling stalwart matched Palmer’s wrestling credentials in their amateur careers and he carried it over to their regular season matchup.

Jenkins landed a pair of quick jabs in the fight's first sequence. Palmer responded with a low kick to the lead leg. He followed it up with a counter left hand, but Jenkins continued to pump his jab as he pressured forward. Palmer found a home for his overhand left. A jumping knee from Jenkins missed the mark. Palmer landed a low kick which allowed Jenkins to attempt the fight’s first takedown. He powered to the back of Palmer along the fence. Jenkins looked for a suplex, but Palmer was able to negate it. The grappling exchanges continued and Jenkins was able to secure both hooks and land heavy punches before the bell rang to end the round.

Palmer landed a strong left to start the second round. He followed it with another low kick. Palmer flurried forward and Jenkins caught him with a jab on the way into range. An overhand left from Palmer caught Jenkins behind the ear, prompting Jenkins to clinch. Jenkins was unable to get Palmer down, but he was able to neutralize him along the cage. Palmer’s assault on the lead leg of Jenkins appeared to have little effect.

A left hook from Palmer backed up Jenkins early in round three. Palmer looked for a Superman punch, but Jenkins easily avoided the strike and powered into the clinch. An accidental groin strike from Palmer paused the action for a moment, but Jenkins was able to continue. Jenkins transitioned to a body lock and he tossed Palmer to the ground. Palmer worked back to his feet, but Jenkins quickly dragged him back to the canvas. With time winding down, Palmer attacked the neck of Jenkins. The 10-finger guillotine attempt was in vain as Jenkins calmly escaped and returned to the feet. A desperate Palmer swung for the fences, but he could not find a finish.

The hard work of Jenkins paid off as he swept the judges’ scorecards to cash as a massive betting underdog. Jenkins earned three points in the featherweight standings with the win over the two-time champ.