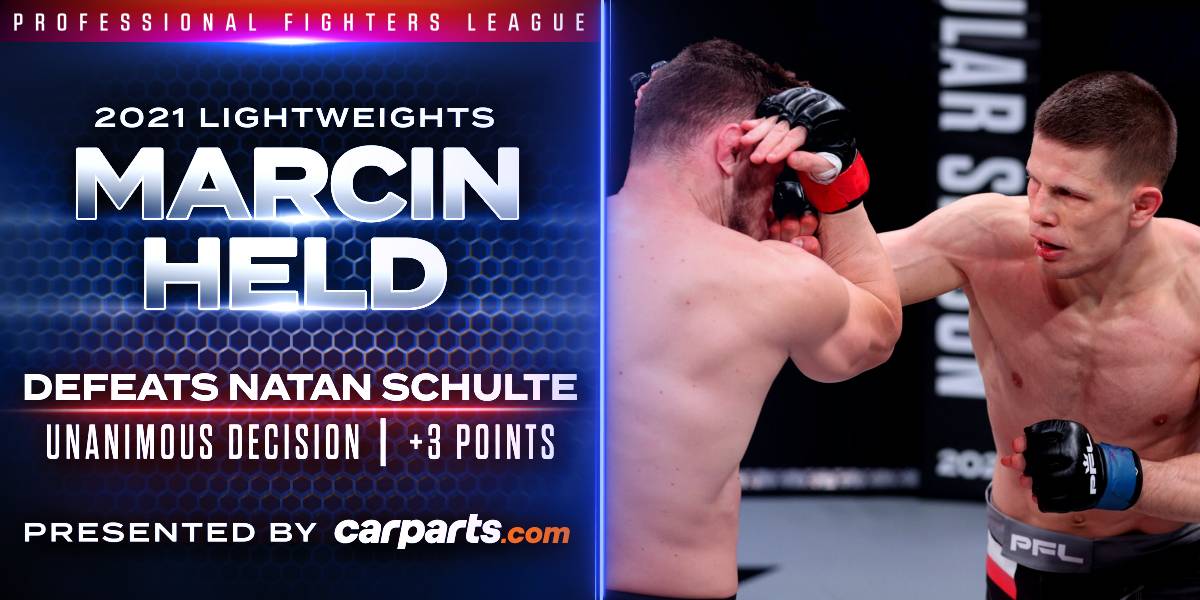 Held Gets the Better of Schulte to Claim Three Points

Two-time lightweight champion Natan Schulte (20-4-1) began his quest for a three-peat during the first event of the 2021 PFL season, welcoming Bellator MMA and UFC veteran Marcin Held (27-7) to the Decagon. Brazil’s Schulte had yet to taste defeat under the PFL banner, while the Polish submission ace Held looked to add another tapout to his resume.

Poland’s Held came out firing combinations on the feet. He threw punches with power and Schulte was forced to use a defensive shell. Schulte attacked with calf kicks. A heavy uppercut from Held popped the head of Schulte. The volume of Held seemed to surprise Schulte. The Brazilian continued to attack the lead calf of Held before clinching and taking the fight to the fence. Held spun Schulte to the fence and looked for a takedown. The lightweights jostled for position before finally separating. Schulte again clinched and they traded knees until the round concluded.

An exchange of left hooks began the second stanza. Held peppered his jab, repeatedly finding the jaw of Schulte. Despite the early success from Held, Schulte marched forward through the barrage. Held again connected with a big uppercut. Schulte’s forward pressure increased as the fight progressed. He landed an uppercut of his own, which forced Held to secure the fight’s first takedown. Schulte bounced right back to his feet and cracked Held with a right hand. Much like the first round, the pair finished the round in the clinch position.

The forward advance of Schulte did not wane in round three. Held continued to land with his uppercuts and knees. Schulte battered the body of Held with kicks, turning his midsection red. A right hand from Schulte wobbled Held two minutes into the round. The Polish fighter recovered and fired back, but he could not slow the advance of Schulte. The strikes of Schulte landed with more impact late in the fight, but Held answered with shots of his own. The two veterans dueled until the final bell and it was sent to the judges to decide the result.

When the verdict was read, it was Held who was victorious. He earned three points in the lightweight standings by upsetting the two-time champion.