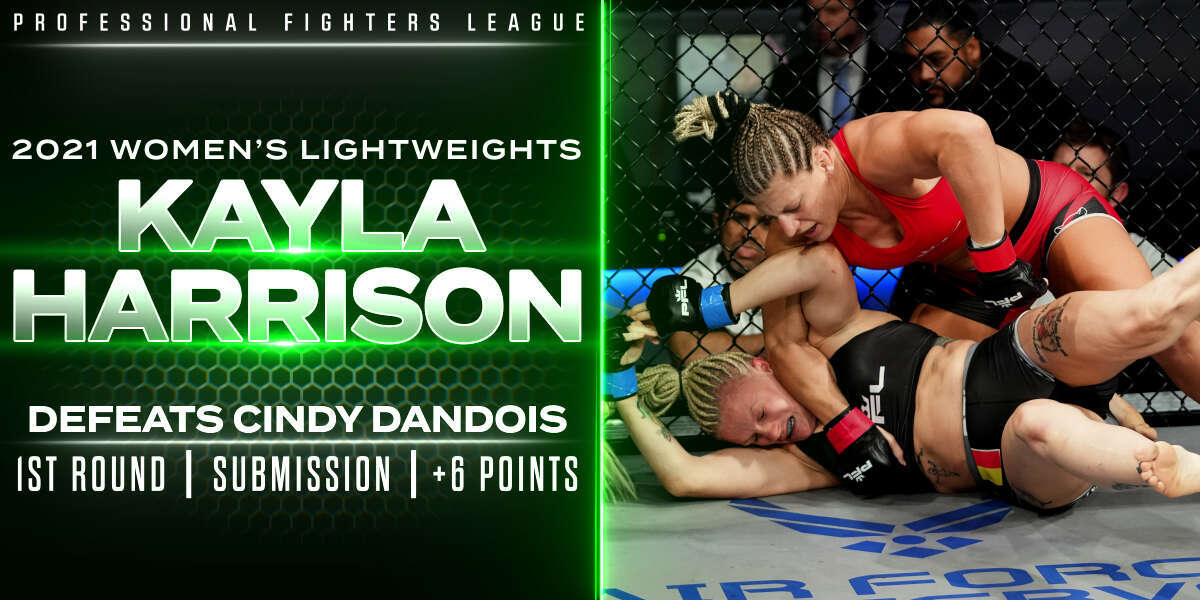 Harrison clinches Playoffs spot — but not as No. 1 seed

The 2019 PFL Women’s Lightweight champion and a two-time Olympic gold medalist in judo, Harrison represents one of the absolute best athletes in MMA today, and no fighter has solved her attack — or come close — to date.

All this dominance said, Harrison needed a quick first-round finish against Dandois to lock up the No. 1 seed in the Women’s Lightweight tournament, as Larissa Pacheco earned two first-round finishes and 12 points of her own.

Could she do just that?

Harrison takes the center and immediately presses Dandois toward the cage. Dandois keeps her right hand high as she circles, and Harrison stalks her foe. Strong body kick lands for Harrison, and Dandois dives for a low single. She doesn’t get it and elects to work from closed guard.

Harrison settles in and immediately begins working with ground-and-pound. A strong left lands, and she immediately passes into side control. Not good for Dandois early here.

Harrison briefly secures the crucifix and lands a series of punches, eliciting a strong response from the crowd. Dandois continues to survive and scramble though, and she briefly reversed position, only for Harrison to immediately shut it down and settle back into Dandois’ full guard.

One minute to go, and Harrison advances position, now searching for an armbar. They’re seemingly too close to the cage to finish it, but Harrison works Dandois away, creates space, and drops back, immediately getting the tap.

There it is: Another first-round finish for Harrison. The streak rolls on, and she moves to 10-0 as a pro.