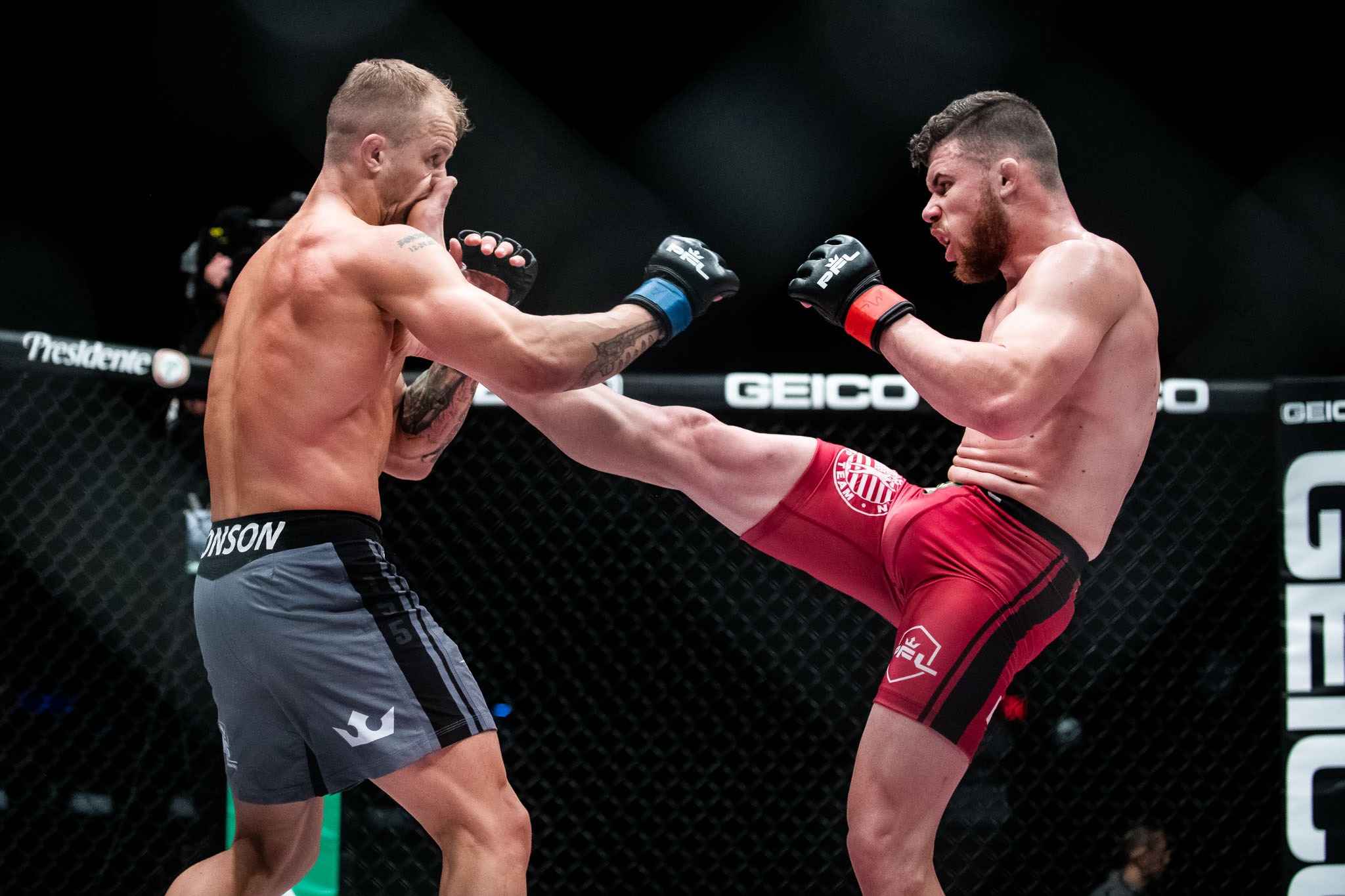 Everything You Need to Know About the 2019 PFL Regular Season

Everything You Need to Know About the 2019 PFL Regular Season

The 2019 PFL Regular Season has come to a close and now all eyes turn towards the PFL Playoffs, which take place on October 11th, 17th and 31st at Mandalay Bay in Las Vegas. 68 fighters started the season in 6 weight divisions. Just 44 remain and 6 will become millionaires and PFL Champions on New Year’s Eve. To check out each playoff bracket, click here. If you missed the regular season, don’t sweat it, here’s everything you need to know.

1. Returning Champs on Track for another $1 million

If you thought depositing $1 million in the bank would make returning 2018 champions Lance Palmer (featherweight), Natan Schulte (lightweight) and Magomed Magomedkerimov (welterweight) a bit complacent heading into this season, think again. All three put on clinical displays during the 2019 regular season to go unbeaten and set up legitimate shots at back-to-back titles. Highlights along the way included Palmer getting his first career knockout, Schulte securing the most takedowns of the season in a single-fight (12), and Magomedkerimov beating Chris Curtis in a heated 3 round decision despite breaking his hand in the first round, which coincidently set up a rematch between the two for the playoffs.

2-time Olympic gold medalist Kayla Harrison, unbeaten in MMA, got a lot of attention this season as the PFL created the first-ever women’s lightweight division. But also competing in that division was the very experienced, media savvy Canadian, Sarah Kaufman, who has fought and beat big names like Liz Carmouche and Miesha Tate. The banter started early on, when Kaufman claimed she was in the PFL to “spoil the Kayla Harrison party”. Kaufman backed that up this season by earning the #1 seed, securing the 3rd-fastest submission of the year along the way. Harrison also was impressive, winning both her fights to move her career record to 5-0 and lock down the #2 seed. With Kaufman looking to steal the spotlight, Harrison stated after one of her wins, “There’s a reason it feels like the Kayla Harrison show”. With Harrison and Kaufman now on opposite ends of the playoff bracket, if they both win their semifinal matchups (Kaufman vs. Larissa Pacheco, Harrison vs. Genah Fabian), then they’ll face off on New Year’s Eve for the women’s lightweight title and $1 million. That’s right, $1 million, just like the winner of the men’s divisions (are you listening U.S. Soccer?)

3. You like knockouts and submissions? Welcome to the PFL.

Check this out – 38% of fights this season ended in first round stoppage. That means if you sat down to watch a PFL event on a Thursday night, on average you got to see 4 first round finishes. As PFL analyst Yves Edwards likes to say, “Get out your popcorn”. It makes sense that the PFL would have such a high percentage of first round finishes - to win the $1 million, you have to make the playoffs, and to make the playoffs you have to score points in the regular season. Nothing earns more points than a first round finish (6 points). Those first rounders this season even included the fastest and 3rd fastest finishes in PFL history. Here’s a look at the fastest knockouts and submissions of the season.

4. Movlid Khaybulaev has the best flying knee in MMA

You saw his name at the top of the list above for getting the fastest finish in PFL history this season – a 10-second KO. But reading it and seeing it are two different things. PFL newcomer Movlid Khaybulaev got that knockout with an insane flying knee, timed so perfectly that Damon Jackson was in la-la land before he even knew what hit him. Before his next regular season fight against Andre Harrison, Khaybulaev’s camp posted video of him training that same flying knee. The league saw it. The fans saw it… and you know Harrison saw it. But nevertheless, as the first round was coming to an end in Khaybulaev vs. Harrison, the Russian saw an opening and launched that knee full speed into Harrison’s chin. Harrison fell to the canvas and looked like he would suffer the first knockout of his career, but the bell saved the veteran and the two ended up fighting to a draw. One thing’s for sure, as the #7 seed Daniel Pineda gets ready to face the #2 seeded Khaybulaev in the playoffs, he’s going to be having nightmares about that flying knee.

Heavyweight Alex “The Spartan” Nicholson is a must-watch. Win or lose, his fights are as entertaining as it gets. He constantly pushes the action and throws creative moves at his opponents. Sometimes that leads to incredible flying knee knockouts like he had against Jake Heun last season. And sometimes it leads to Nicholson being flattened like a pancake. You take a guy like that and put him in a win-or-go-home situation, and you can expect fireworks. Nicholson entered his final regular season bout with 0 points after losing his first fight. The Spartan had no intention of being eliminated, and he promised a knockout of the much larger Zeke Tuinei-Wily. Nicholson, true to form, delivered, landing a big right hand to knock out the Samoan in the first round. That result earned him 6 points and qualified him for the heavyweight playoffs. Nicholson headlines a group of 8 fearless fighters who stepped up in win-or-go-home situations, with their back against the wall, to secure 1st round finishes and make the playoffs: Alex Nicholson, Muhammed DeReese, Vinny Magalhaes, Genah Fabian, Larissa Pacheco, Alex Gilpin, John Howard and David Michaud.

Did I mention these guys already? Well, they deserve two sections. All three are unbeaten in the PFL and they could be headed for their second $1 million checks.

Utilizing the PFL’s SmartCage platform and Cagenomics technology, fighters had their strike speed measured throughout the regular season. While size and power don’t always lead to high speed, this season it was the bigger weight divisions who secured 3 of the 5 fastest strikes of the year, led by Russian Viktor Nemkov at 30.6 mph. Nemkov qualified for the light heavyweight playoffs as the #5 seed, and you can see him take on another fast striker in #4 seeded Bozigit Ataev, who had the 5th fastest strike of the season, in the quarterfinals on October 31st.

8. Vinny Magalhaes Gets 5th PFL Finish in Less Than 2 Minutes

Former Brazilian jiu jitsu world champion Vinny Magalhaes was one of the most dynamic fighters to watch last season. He finished his first four opponents each in less than 2 minutes, and qualified for the Championship after just 6:29 of cage time on the season. Everyone knows what happened then – Sean O’Connell avoided Magalhaes’s takedowns and eventually beat the Brazilian by TKO. To start the 2019 season, Magalhaes lost by knockout again, this time to Emiliano Sordi, causing some to wonder if his run in the PFL was coming to an end. But facing elimination in his final regular season fight, Magalhaes reminded everyone that he remains one of the most dangerous finishers in the league, as he submitted Rakim Cleveland at 1:56 in the 1st round to earn 6 points and make the playoffs. Magalhaes is 5-2 in the PFL, but look at how he got those 5 wins:

The light heavyweight and heavyweight divisions will each crown a new champion this season, and Argentina’s Emiliano Sordi and Russia’s Denis Goltsov are on a mission to win those belts.

10. The Welterweight Division is Absolutely Stacked

The PFL’s welterweight division is full of stone-cold finishers from all over the world who specialize in a variety of disciplines. Coming into the season, everyone knew it would be a division to watch. It featured both returning finalists, 2018 champ Magomed Magomedkerimov and Ray Cooper III. Two semifinalists from last season’s middleweight division moved down to 170 – Sadibou Sy and John Howard. Plus newcomers included former UFC fighter Glaico Franca, the highly touted Chris Curtis and well-known finisher David Michaud. How did it all work out? This season the welterweights had a higher stoppage rate than any other division in the PFL (73%). All 7 of the names mentioned above made the playoffs with an impressive stoppage win, but these two finishes in particular are must see highlights:

11. Not everyone makes the playoffs

In the PFL format, if you don’t finish in the top-8 (or the top-4 for the women) in your division standings, you don’t make the playoffs. This season several strong contenders will miss out on a chance to fight for $1 million after not earning enough points in the regular season. Here are some notable names who you won’t see fighting in October:

Each year, the PFL will re-sign the best fighters from the previous season and bring in more top talent, which means the PFL roster will continue to get more competitive as fighters seize the opportunity to compete for $1 million. More than 50% of the 2019 PFL roster consisted of new fighters who were signed in the offseason, with the other half returning from 2018. Here’s a look at how the new fighters in the 5 returning men’s divisions fared.

Important note for the playoffs!

One of the most exciting parts of the PFL season is the playoffs, where fighters have to fight twice and win twice in the same night to make the final – a 2-round quarterfinal and a 3-round semifinal (men’s divisions only). Now there’s good news for any fans or fighters who were frustrated with the tiebreaker used for draws in last season’s 2-round quarterfinals. The PFL heard the feedback and developed a new system for 2019. The Nevada State Athletic Commission approved the use of a new tiebreaker for the 2019 Playoffs.

Last season the tiebreaker went to the fighter who won the 1st round on the judges’ scorecards.