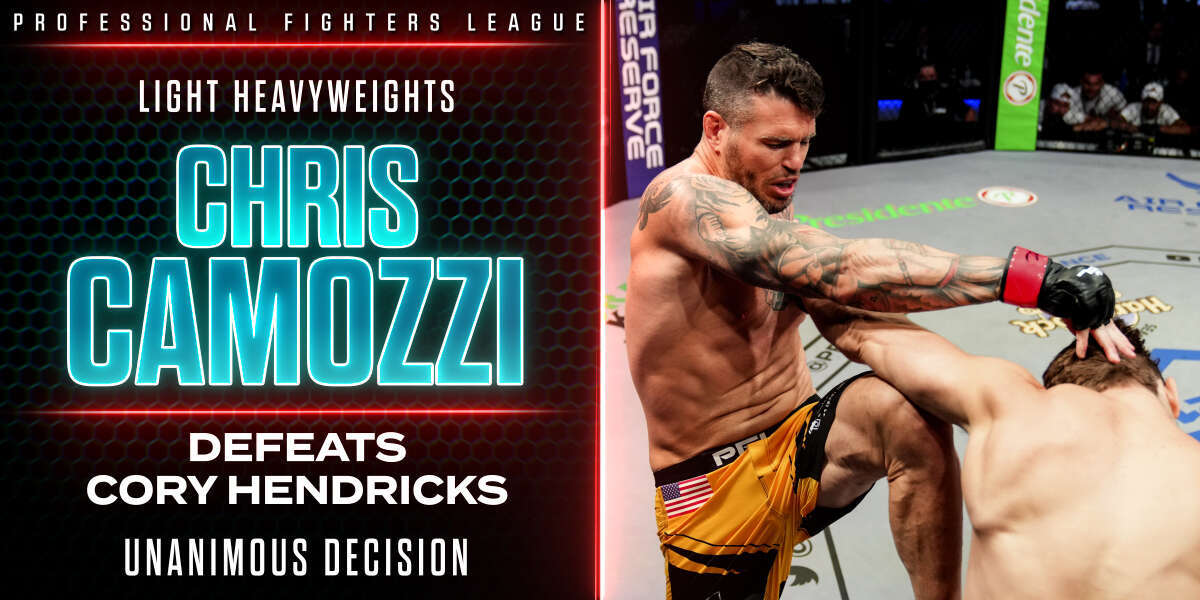 Camozzi (26-15) had a tough road in the regular season, picking up a win over No. 2 seed Cezar Ferreira and suffering a unanimous decision loss to 2019 PFL World Champion Emiliano Sordi. With a win on Friday night, Camozzi, who trains with UFC veterans Anthony Smith and Dustin Jacoby at Colorado's Factory X MMA, would begin to build some momentum with a two-fight winning streak.

Hendricks (8-3) is riding a two-fight winning streak of his own and earned a submission win over No. 3 seed Marthin Hamlet during the 2021 PFL Regular Season. Out of Hendricks's 8 career wins, 7 are finishes with 5 coming in the very first round.

After a few exchanges with their hands, it was Hendricks who attempted to change levels first. Camozzi easily fought off the takedown as the two men returned to the center of the cage. Camozzi seemed to settle in around two minutes into the opening frame, consistently landing with his 1-2 combination. Hendricks was struggling to find his range, while Camozzi was keeping the pressure on his opponent. Both men let their hands fly in the closing seconds of the fight with Camozzi finishing off a strong round.

Hendricks was throwing out his jab in the first few seconds of the round, but Camozzi swarmed and had Hendricks retreating. Camozzi opened up and was looking to pile on the pressure, until walking right into a double-leg from Hendricks. Camozzi popped right back to his feet and attempted a takedown of his own with double underhooks, but Hendricks reversed position and put Camozzi on the mat. Once the action shifted to the ground, it was Camozzi who landed the next sweep to find his way on top. However, Hendricks stayed active and was able to return the favor by elevating Camozzi’s hips and rolling to his back. Hendricks threatened with a rear-naked choke. After a slight stall in a neutral position, Hendricks chained together his wrestling to regain top position. Hendricks began working from half-guard and isolated Camozzi’s right arm while looking for an arm triangle. Camozzi realized what Hendricks was working for and cranked a kimura, ultimately using it to sweep Hendricks before landing some ground-and-pound prior to the bell.

Chris Camozzi attacks from the bottom! He ends the 2nd round on top!#PFLPlayoffs
LIVE NOW ESPN+
🌐 https://t.co/WfOt9XBfzk pic.twitter.com/lHQG5OQvc9

Camozzi was the first to land a significant flurry in the final round, but he backed away after Hendricks began to cover up. Hendricks looked to shoot, though was unable to get ahold of Camozzi. After some head movement in the pocket, Camozzi got the underhooks and used the bodylock to press Hendricks against the cage. Hendricks broke free, but Camozzi returned to the 1-2 como which forced Hendricks to retreat. Camozzi was opening up and landing with regularity with Hendricks beginning to slow down. Hendricks threw some knees against the cage, but was unable to put together any threatening attack in the final five minutes while Camozzi kept the pressure on.

Camozzi’s methodical approach created a grueling pace. With Camozzi staying relentless throughout the duration of the bout, the veteran was able to wear down his opponent and end Hendricks’s two-fight winning streak while starting a two-bout streak of his own. The veteran savvy paid off as the fight went to the judges.