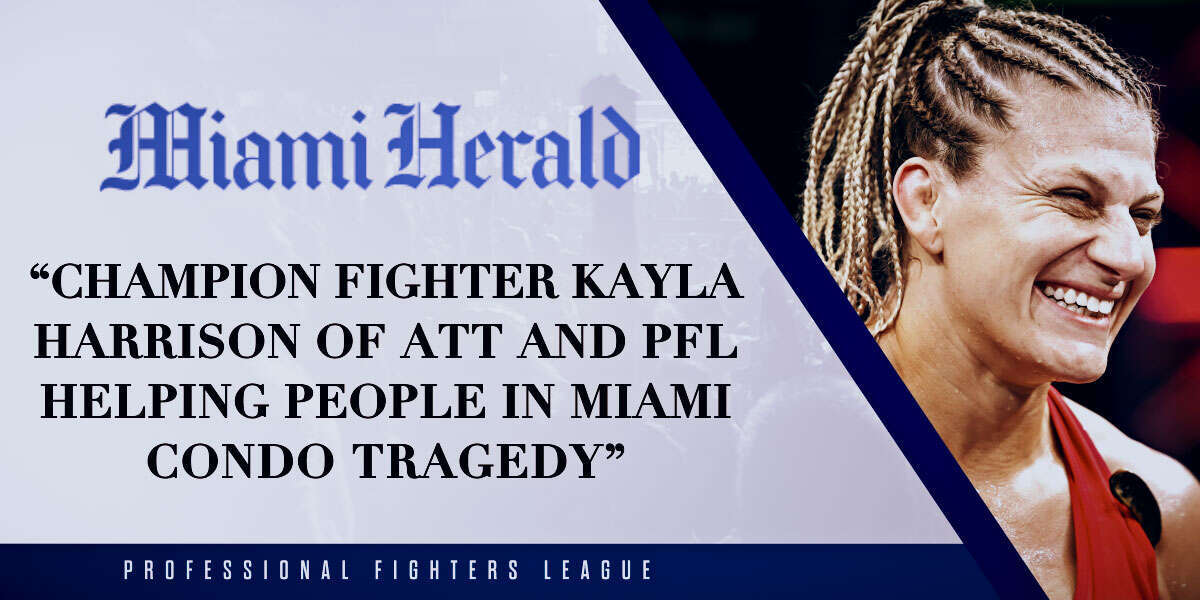 With the PFL MMA Playoffs in South Florida in August, PFL Champ Kayla Harrison of American Top Team encouraged PFL to get involved in the Surfside cause.

PFL CEO Peter Murray said: “Professional Fighters League is saddened by and grieve the recent event in Surfside, Florida, and wants to let the people of South Florida know we’re supporting them through these difficult times. Inspired by Kayla Harrison’s call to action to the MMA community to assist in the recovery efforts, Professional Fighters League has donated $10,000 to the American Red Cross in South Florida on her behalf.”

Harrison, a South Florida resident, is giving back as well, through her Fearless Foundation. She is also asking her fans, friends, colleagues in MMA and judo, ATT coaches and teammates to help.

Of those living or staying in the Surfside condominium at the time of the disaster, many have been accounted for and are safe but need assistance.
Kayla’s Twitter: https://twitter.com/KaylaH

In my audio interview with Kayla Harrison, she discusses helping the people affected by the Surfside building collapse, the 2021 PFL MMA season, the 2021 PLF Playoffs in South Florida, her ATT coaches, ATT founder Dan Lambert and his love for professional wrestling and more.

A search and rescue operation entered its 12th day on Monday, as crews continued to carefully comb through the debris in hopes of finding survivors. The partial collapse occurred around 1:15 a.m. EST Thursday, June 24 at the Champlain Towers South condominium in the small, beachside town of Surfside, six miles north of Miami Beach.

Approximately 55 of the oceanfront complex’s 136 units were destroyed. There are 27 dead and 118 others remain unaccounted for after the 12-story residential building partially collapsed in Surfside, part of Miami-Dade County.

ABOUT KAYLA HARRISON
Harrison, 30, who lives in South Florida via Middletown, Ohio, and Boston, is not only undefeated at 10-0 in MMA and a PFL champion, but she is the first two-time Olympic gold medalist in judo for Team USA, a two-time “Impractical Jokers” guest star, author of “Fighting Back” and a single mom who formed the Fearless Foundation.
When you drive into Middletown, Ohio, the sign reads home of Cris Carter, Jerry Lucas and Kayla Harrison.

Harrison trains at American Top Team in Coconut Creek. Her hard work there once gain paid off. She recently qualified for the PFL Playoffs, which occur throughout August in South Florida at the Hard Rock Hotel & Casino, near Hollywood. Thus, the defending champ will have a short drive this time to compete in the semifinals.

Harrison won the PFL championship and $1 million at Madison Square Garden in New York City on New Year’s Eve in 2019. PFL decided to cancel its 2020 season for health and safety concerns stemming from the pandemic.

The Professional Fighters League (PFL) announced that its 2021 Playoffs will be held at Hard Rock Live at Seminole Hard Rock Hotel & Casino near Hollywood.
The chase for the six 2021 PFL Championships, and the $1 million purses that come with it, kicks off on Friday, August 13 as the field of 24 fighters who will earn a Playoff berth will be whittled down, over three events, to just 12 finalists who will advance to the 2021 PFL Championship later this year.

The PFL Playoffs will occur over three action-packed nights beginning on Friday, August 13 at 7 p.m. featuring lightweight and featherweight action.

On Thursday, August 19 at 7 p.m. fans will see the light heavyweights and welterweights go face-to-face in a combat showdown.

Then on Friday, August 27 at 8 p.m. women’s lightweight and heavyweight action is set to hit the PFL cage.