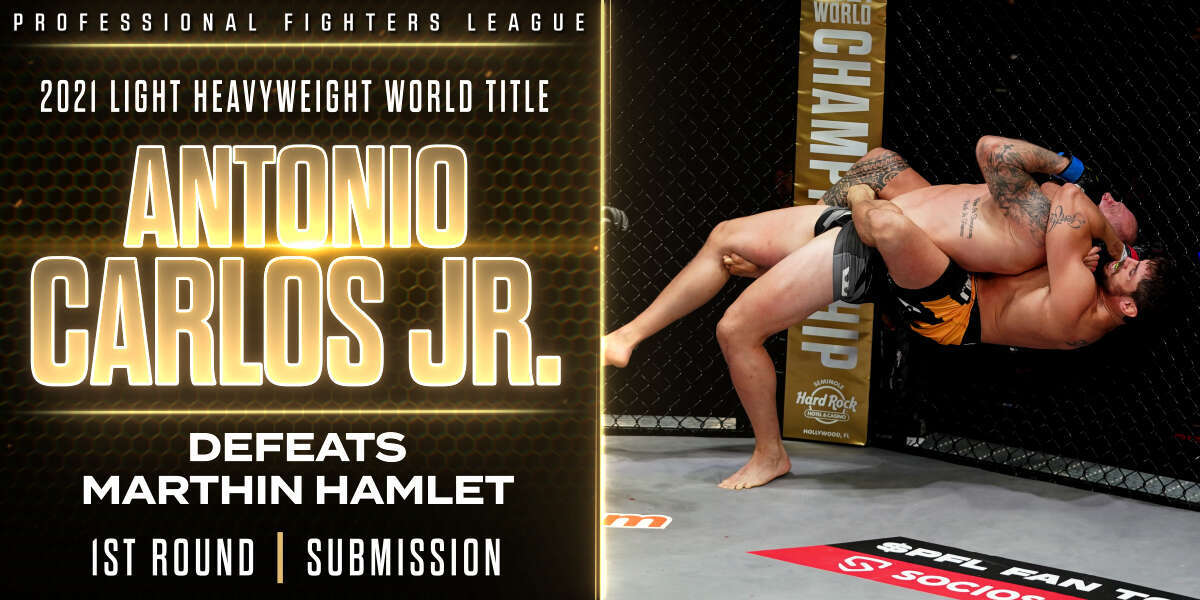 Light heavyweights took center stage at the 2021 PFL World Championship Wednesday evening to close out the preliminary portion of the fight card.

With a card this stacked, two title fights trickled onto the prelims, and No. 1 seed Antonio Carlos, Jr. and No. 3 seed Marthin Hamlet were tasked with following up a potential Fight of the Year from Loik Radzhabov and Raush Manfio one fight earlier.

Could they live up to the hype and keep the crowd on its feet?

Here’s how the clash ended inside the Seminole Hard Rock Hotel & Casino:

And here we go.

They touch gloves and get after it, Carlos Jr. immediately pushing forward. He’s working a long jab as he looks to close the distance. Hamlet, however, looks composed early, firing back with a variety of strikes to keep Carlos Jr.’s attention.

Carlos Jr. throws a leg kick and eats a left hand in the process. It appears to stagger him, and he tumbles backward, initiating a clinch. They almost immediately separate and return to striking range. Carlos Jr.’s back on the jab, mixing in a few teeps as well.

Hamlet lands a strong low kick but Carlos Jr. eats it well and continues to press forward. Big right hand into a takedown from Carlos Jr., and he snatches Hamlet’s back with a quickness during a scramble.

Just like that, Hamlet’s fortunes have changed inside the SmartCage, as he now has a massive Brazilian jiu-jitsu world champion on his back with over a minute to work.

Carlos Jr. doesn’t need that long –– at all.

He sinks in the choke, and this one’s over. Carlos Jr. is a champion and a millionaire, completing a flawless run through the PFL Light Heavyweight tournament.

Carlos Jr.’s grappling skills remain on another planet, as Hamlet went from looking comfortable and dangerous to tapping out in an instant. With that, the American Top Team product caps his dominant 2021 run in style.