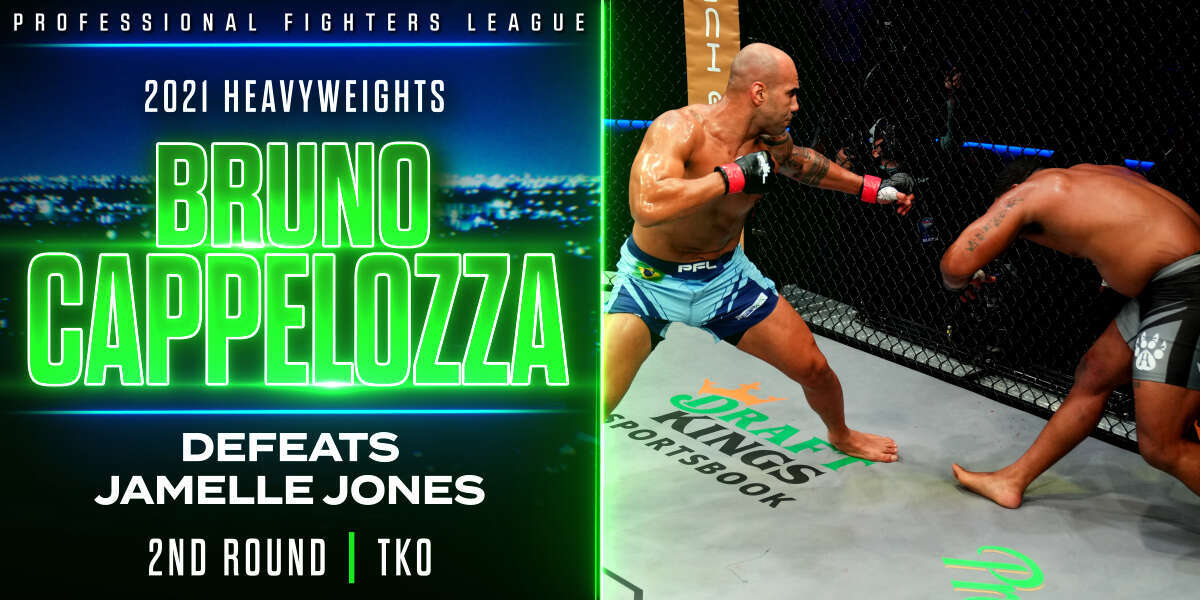 Cappelozza drops Jones with jab, scores emphatic finish in Round 2

Could Bruno Cappelozza do it again?

The No. 1 seed in the PFL Playoffs, Cappelozza knocked out both of his opponents during the 2021 Regular Season, giving him a cozy spot atop the heavyweight bracket as the Playoffs began.

Thursday evening inside the Seminole Hard Rock Hotel & Casino, however, Cappelozza faced a significant challenge in the form of No. 4 seed Jamelle Jones.

Jones came into the fight off three straight first-round knockouts of his own, and he secured his spot in the Playoffs despite fighting just once during the Regular Season.

Who kept the momentum rolling and earned a spot in the PFL World Championship?

Jones powers forward out of the gates and initiates a clinch, landing a knee to the groin in the process. Fifteen seconds in, and we have a break in the action.

Cappelozza is good to go, and we’re back after it. Strong leg kick lands from Cappelozza that gets Jones’ attention. Another. Cappelozza’s working the feints, and Jones looks just a half-second behind everything coming at him.

Cappelozza lands a massive overhand right, and Jones once again rushes in to clinch. Another knee on the inside, but Cappelozza avoids getting taken down, and they’re back to striking at range.

Thus far, Cappelozza’s owning these striking exchanges all around. He slips looking for the head kick, but Jones doesn’t pounce, and they reset in the center of the cage with one minute to go in the round.

More stand-up, more Cappelozza taking charge. He lands a series of kicks to close out the first frame. Jones needs to regroup and come out with a fresh game plan if he wants to turn the tables in this one.

These two are swinging heavy leather!#PFLPlayoffs LIVE NOW on ESPN & ESPN+
How To Watch: https://t.co/WfOt9XBfzk pic.twitter.com/xsgWFHhqhz

Thirty seconds in, and they’re cautious here. Jones opens up with a combo capped by a big left hand, but it all comes up short as Cappelozza wisely maintains the distance. Now Jones is in on a shot, but Cappelozza sprawls beautifully and again avoids the takedown.

Jones is slow to get up, and Cappelozza notices, pouncing and pressuring his opponent against the cage. A jab lands and dazes Jones, and Cappelozza is all over him, giving the referee no choice but to stop the fight.

Bruno Cappelozza!!!! He gets it done in the 2nd round!!!#PFLPlayoffs pic.twitter.com/DHjPXgWwFt

There’s a reason he was the No. 1 seed coming into the Playoffs. That’s three fights in 2021 and three finishes for Cappelozza.

He now strolls into the PFL World Championship to rematch No. 3 seed Ante Delija for a shot at $1 million and the PFL Heavyweight title. In the opening round of the regular season, Cappelozza finished Delija via TKO.

WIll Delija adjust or will history repeat itself? We’re about to find out when they take the cage to cap of the 2021 PFL season.