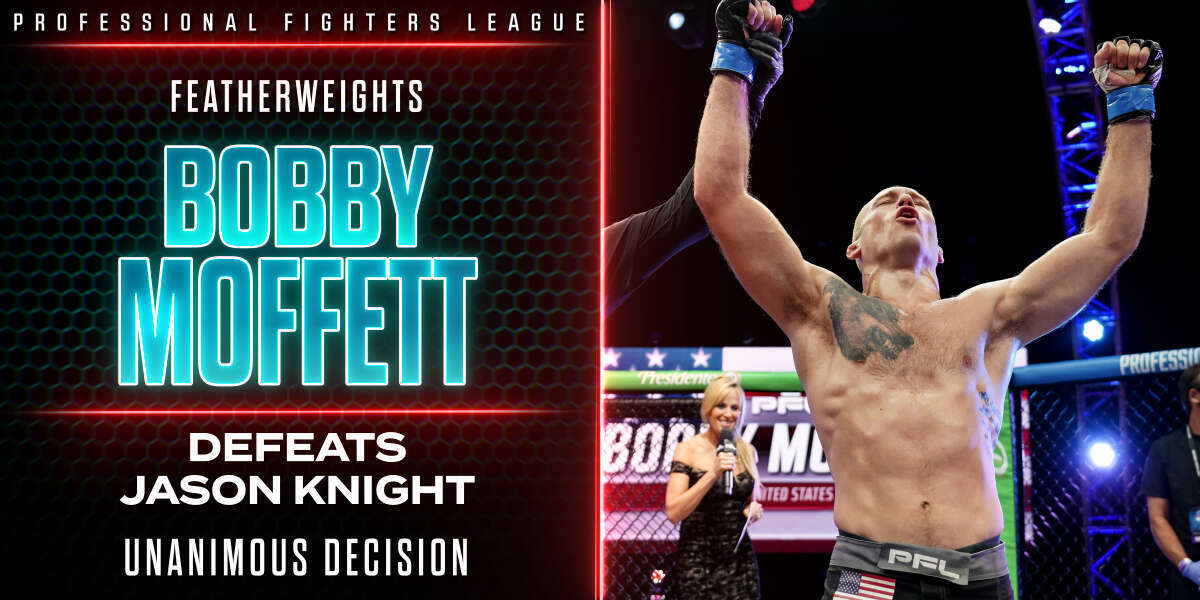 PFL featherweights take center stage in the third fight of the night, with Bobby Moffett making his sophomore appearance in the PFL cage when he welcomes combat sports veteran Jason Knight in a non-Playoff bout.

Moffett (13-6, 1 NC) is looking to get back into the win column after a tough contest against No. 3 seed Bubba Jenkins in his last outing. Mitchell is a former LFA and RFA title challenger, so will prove to be a tough test for the newcomer.

Knight (22-6) comes to PFL with a strong following thanks to stints in the UFC, Bare Knuckle FC, and American Top Team teammate Jorge Masvidal's bare knuckle MMA promotion Gambred FC. Always bringing a fan-pleasing style, Knight has earned three knockouts and 15 submissions in his professional career. However, a submission won’t come easy against Moffett, who has never been submitted in his 20-fight career.

Moffett opened the fight with a high kick, before switching to a low calf kick. Moffett’s attack was kick heavy out of the gate. Moffett changed levels and attempted a takedown, but Knight was able to sprawl and work his way to an inverted triangle. Knight began wailing shots to Moffett’s body as Moffett attempted to find an opening to escape. Knight continued to rain down heavy punches to the ribs from top position while keeping the inverted triangle locked. Knight’s legs were eventually separated and Moffett made his way back to his feet with one minute remaining. Moffett marched forward and was being the aggressor in the closing moments of the round, landing a heavy body kick that hurt Knight followed by some punches before the bell.

Knight came out aggressive to start the second frame, pushing the pace and keeping the pressure on his opponent. Moffett landed a heavy right hand which helped close the distance before changing levels and going for the single leg. Knight attempted a pull for a submission, but it was Moffett who kept the dominant position and landed on top. Moffett began working from half guard. Knight managed to find his way to the cage and used that to his advantage as he worked his way back to his feet. Moffett never lost control, however, and elevated Knight before landing another immediate takedown. Knight was working the rubber guard to control Moffett’s posture. After a brief scramble, Moffett ended up back in Knight’s guard. Knight briefly threatened with a gogoplata before switching to a triangle, but the bell rang before the submission could be pulled off.

It was Knight who shot for a takedown to open the third round. After Moffett stuffed the initial takedown attempt, Knight climbed onto Moffett’s back. Moffett, however, was able to hit a switch and rolled into top position. Moffett found his way to side control and was grinding out Knight, who was trying to stay active and work back to his feet. Knight scrambled against the cage in an effort to break free, but Moffett quickly dumped him back to the mat with a minute to go. Moffett was controlling Knight from half guard before a referee stand up with 30 seconds remaining. Knight pushed forward in the final seconds of the fight, but it was likely too little, too late as time expired.

How did you score this one at home?
We go to the judges...#PFLPlayoffs
LIVE NOW ESPN+
🌐 https://t.co/WfOt9XBfzk pic.twitter.com/sxpkGlbuLG

Knight came out strong in the opening frame, but once Moffett began using his wrestling he was able to gain control of the fight. having pushed No. 3 seed Bubba Jenkins to a decision in his last outing and coming out on top on Friday night, Moffett is proving he belongs in the mix at 145-pounds.