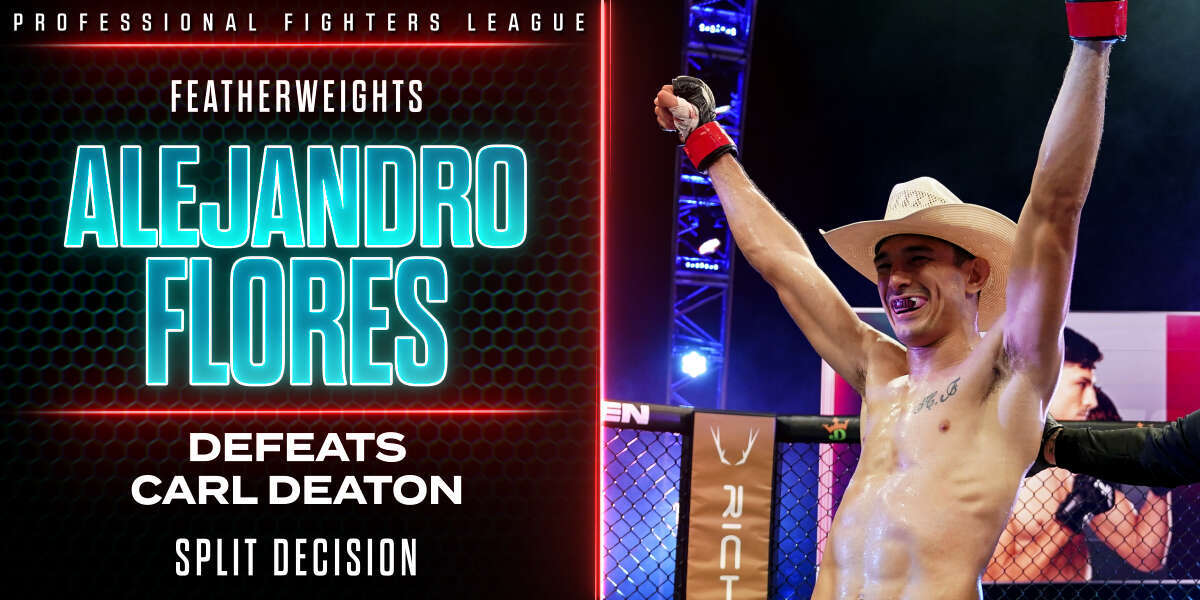 In the second preliminary bout of the night, Mexico's Alejandro Flores and Xtreme Couture's Carl Deaton look to keep their momentum going when they step into the PFL cage.

Flores, who fights out of Monterrey, Nuevo Leon, Mexico, put together an impressive 7-1 record in Combate Global and made an appearance on Dana White's Contender Series in 2020. Boasting a record of 18-3, eight of Flores's wins have come by stoppage.

Deaton (13-4, 1 NC), who has earned stoppages in 10 of his 13 victories, was previously scheduled to compete under the PFL banner at PFL 4 in 2018 against Bekbulat Magomedov, but he was removed from the card after missing weight. This time around, Deaton looks to earn another tally in the win column with an emphatic performance.

After a brief feeling out process to start the fight, Flores was looking to find his range with some low leg kicks. There was a brief break in the action after a cup check from Deaton. Flores took advantage of a slip from Deaton and put on the pressure, but Deaton was able to recompose himself and return to the center of the cage. Flores continued to control the range with his seven-inch reach advantage while Deaton was looking for the opportunity to get inside. There was plenty of respect from both fighters with both men avoiding engaging in the pocket. Flores picked up the pace at the end of the round with two high kicks and a flurry of punches before the bell.

Flurry to close the 1st round and a little trash talk between Deaton & Flores
2nd round coming up...#PFLPlayoffs
LIVE NOW ESPN+
🌐 https://t.co/WfOt9XBfzk pic.twitter.com/v7lDrRI3L4

The lead leg of Deaton was beginning to show damage from the Flores low kicks early in the round as Flores once again looked to dictate the pace. Deaton landed his biggest punch of the night near the three-minute mark with Flores’s butt hitting the mat on a flash knockdown.Flores recovered quickly and returned to range where he looked the most comfortable. Deaton stepped in again and connected on another flurry as blood began trickling from Flores’s nose. Deaton was finding his rhythm in boxing range after continuing to punch his way in. Flores landed a high switch kick  for his biggest moment of the round, but was unable to follow it up with anything significant before Round 2 came to an end.

Highlights from the 2nd round! We go to the 3rd...#PFLPlayoffs
LIVE NOW ESPN+
🌐 https://t.co/WfOt9XBfzk pic.twitter.com/UYgn3bRkoO

Entering the third and final round, the fight appeared to be up in the air. Deaton took the center of the cage while Flores was circling on the outside. Flores just missed on a spinning backfist but was content with his movement at range. A cut opened on Deaton’s right eye. Deaton showed some aggression with a minute to go, cutting off the angles trying to measure the distance. Deaton attempted to shoot for a takedown, but Flores showed off his balance and remained on his feet. Deaton leaped in with some heavy shots in the closing seconds and raised his hands as time expired in the razor-close fight. It was all up to the judges.

It was a very close fight from the beginning until the final bell. Flores was the busier fighter, while Deaton had the bigger moments thanks to his heavy shots in the second round. Ultimately, it was Flores’s activity and movement that was enough to get the job done for Flores as he advanced to 19-3.