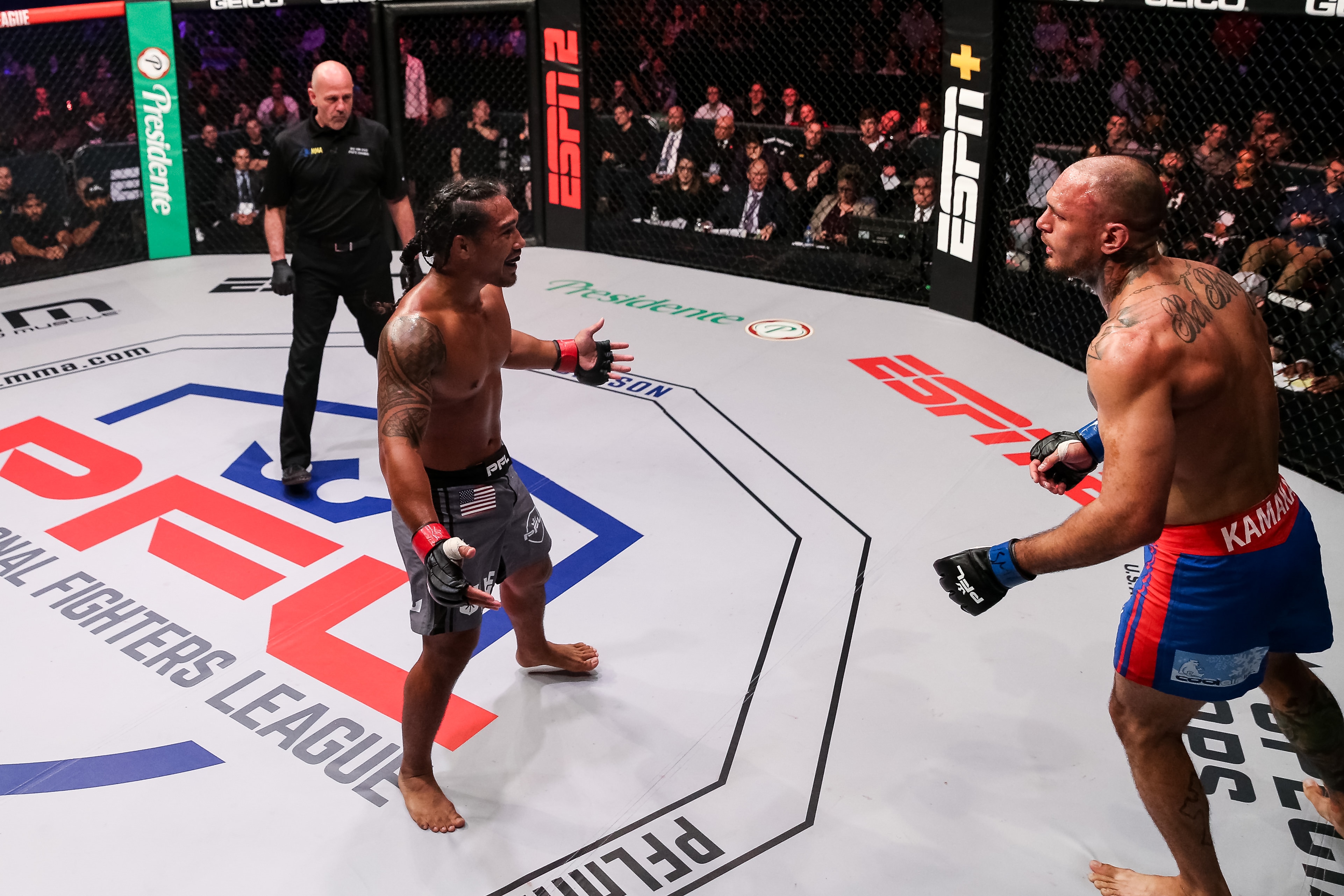 The Professional Fighters League returned for its second season on Thursday, May 9 as PFL 1 took place live on ESPN+ and ESPN2 from NYCB Live’s Nassau Coliseum in Uniondale, New York.

Overall, the card produced an exciting night of fights, with 6 of the 10 fights ending in finishes, including 4 in the 1st round.

With the event now in the rearview mirror, let’s take a look at five things we took away from PFL 1.

Prior to PFL 1, two-time Olympic gold medalist Kayla Harrison had only competed in mixed martial arts three times. Training at the famed American Top Team, Harrison put together three-straight stoppage victories over relatively unknown competition. Also, all three of those bouts came under the PFL banner though they were not part of a regular season.

Because of that, the stakes are now higher for the 28-year-old Harrison. The PFL now has a women’s lightweight division and she’ll be competing for a championship and a $1 million prize. She’ll also be facing tougher competition and that was the case this past Thursday.

Harrison was originally matched up against Svetlana Khautova, who holds a 2-0 professional record. When Khautova withdrew from the bout, however, Larissa Pacheco stepped in as a replacement. Pacheco, a former UFC veteran, represented a far more experienced and far more dangerous opponent. Given the circumstances, it’s important to note that Harrison didn’t have much time to specifically prepare for Pacheco.

In the end, however, she passed her most difficult test to date with flying colors. Aside from one moment in the second round when Pacheco took her back, Harrison controlled the action and scored a one-sided decision victory.

Harrison is in 2nd place with 3 points in the women’s lightweight standings heading into her 2nd fight, trailing Sarah Kaufman (6 points). Only 4 of the 8 women will make the playoffs, so the pressure will be on for Harrison to get a finish and secure bonus points at PFL 4 on July 11.

Magomed Magomedkerimov Picks Up Right Where He Left Off

Magomed Magomedkerimov, one of the most highly regarded fighters competing under the PFL banner, won the welterweight championship last season and was looking to pick up right where he left off on Thursday. And that he did.

Taking on John Howard, a veteran of the sport and a semi-finalist at middleweight last season, Magomedkerimov proved to be a threat to any fighter in the division. Taking control of the fight early on, the Russian wasted little time finding a finish, locking in a fight-ending guillotine choke just minutes into the first round. Magomedkerimov used that same submission, guillotine choke, to defeat Ray Cooper III for the 2018 title on New Year’s Eve.

The 6 points earned have Magomedkerimov siting in 3rd place heading into his 2nd regular season fight. With another impressive win under his belt, the 29-year-old has shown that he’ll be looking to repeat the success he found last season.

Last season, many saw Ray Cooper III as the PFL’s breakout star and for good reason, as he scored four-straight stoppage victories, with two of them coming over Jake Shields, and was only defeated by Magomedkerimov in the finals.

And similarly to how Magomedkerimov picked up right where he left off on Thursday, Cooper also got right back to his winning ways.

Taking on his second cousin and fellow Hawaiian Zane Kamaka, Cooper was receiving a ton of attention heading into the bout given his success last season and given the bad blood between the two. On fight night, however, Kamaka proved to be no challenge for last season’s welterweight runner up.

Early on in the fight, Cooper landed a takedown and immediately looked to rough Kamaka up with big shots. As the fight went on, Cooper controlled Kamaka on the canvas and was able to lock in a rear-naked choke in the second round to secure the victory. He earned five points for his efforts and currently occupies the 4th spot in the standings, directly behind his rival Magomedkerimov.

It’s clear that the 26-year-old will be looking to make another title run this season.

Heading into season two, much of the attention has been placed on Harrison in regards to the women’s lightweight division.

However, those familiar with the sport are well aware of what Sarah Kaufman brings to the table. Having held titles in both Strikeforce and Invicta, the 33-year-old Canadian is a skilled veteran who also spent time in the UFC.

In addition, she came into season two with a 20-4-1 record, making her the most experienced fighter in the division. The question, however, was how she would adapt to competing at 155 pounds given that she has spent the majority of her career as a bantamweight.

On Thursday, Kaufman proved that she deserves to be recognized as a threat moving forward. In the end, size didn’t matter, but rather her experience proved to be the defining factor, as she scored an arm-triangle finish over Morgan Frier just minutes into the first round. With the victory, Kaufman received 6 points and now sits in 1st place in the women’s lightweight division.

The Liver Kick That Shook The Arena

The ESPN2 portion of PFL 1 got off to a hot start rather quickly.

To open up that portion of the event, welterweights Sadibou “The Swedish Denzel Washington” Sy and David Michaud did battle. Unfortunately for Michaud, the bout didn’t last very long, as Sy was able to score a stoppage victory just 17 seconds into the first round.

The timing of the finish was impressive enough, especially given that it was the second fastest stoppage in PFL history, but the fashion in which it occurred was what many fans took notice of. After throwing a few leg kicks, Sy unleashed a brutal body kick that landed perfectly on the liver of Michaud. Despite a delayed reaction, Michaud melted from the pain, proving just how devastating a liver kick can be.

After a few more shots on the ground, the referee had seen enough and Sy was named the winner. With the victory, Sy made a statement while also proving that he has the ability to finish an opponent with one shot. He also earned six points and is atop the welterweight division.