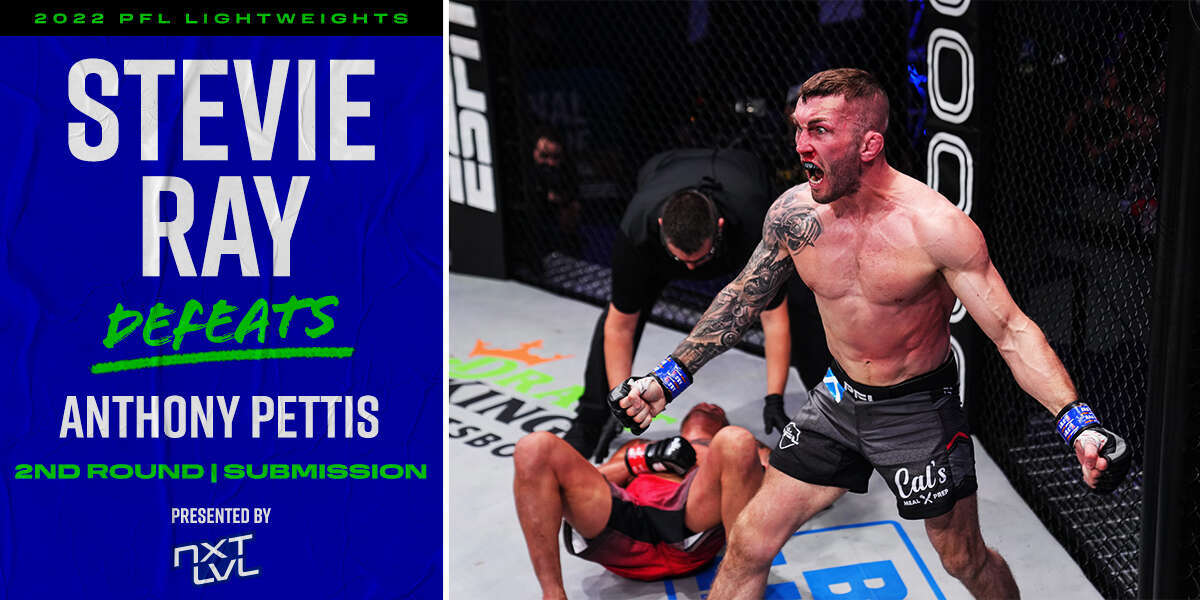 Our sole Lightweight bout of the evening will see Anthony “Showtime” Pettis (25-12) take on Stevie Ray (23-10).  Pettis has already clinched a playoff spot but is still fighting for seeding, while Ray will need a finish in order to have any chance of making the postseason.

Currently in 1st place in the Lightweight division, “Showtime” started his season in style with a 1st round triangle choke over Myles Price and has looked like a completely different fighter following an 0-2 campaign in his inaugural season with PFL last year.

In order to keep his playoff hopes alive, Ray will need to finish Pettis by 2:42 in the 3rd round. If he can do that, he’ll overtake 2021 Raush Manfio who currently sits in 4th place with 4 points and make the playoffs.  It’s win or go home for “Braveheart”.

2 southpaws meet in the center of the SmartCage and we’re off! Showtime, staying true to the moniker opens with an axe kick and follows it up with a flying knee.  Ray is not deterred however, pressuring forward and probing with his jab and a big straight left behind it.

Pettis lands a nice kick to the body but Ray is doing a good job keeping the pressure on and not giving Pettis the space he needs to get off some of his flashy offense.  Ray now shoots on a single but Pettis is able to dig for the underhook and flip the position along the fence.

The fighters now jockey for position in the clinch briefly before Showtime disengages and retreats to the center of the SmartCage.  Ray comes forward swinging and uses the punches to initiate the clinch once again, but Pettis is quickly able to break and circle off.  Ray reengages and it seems clinch pressure is a big part of his gameplan tonight.

Ray is mixing up his strikes, nicely working in body shots and keeping Pettis gessing as he outlands the former UFC Champion through 4 minutes of round 1.

Pettis seems to be getting Ray’s timing down as he counters a jab with a nice straight right and follows up with a tornado kick that lands HARD on Ray’s guard with a resounding thud.

That will end a competitive 1st round with Pettis picking up some momentum to bring back to the corner.

Round 2 begins and again Ray is the one pressing the action and coming forward.  The fighters exchange leg kicks before Pettis lands a question mark kick as he starts to settle in and find his angles and range.

Pettis is now coming forward, landing a big roundhouse to the body followed by another question mark kick and keeping the pressure on with a big left cross.  Pettis is picking up steam now but Ray is still marching forward.  Pettis lands a right cross this time and has really settled in nicely in this 2nd round,

Pettis shoots a takedown and gets it to the mat but he overextends and winds up giving Ray his back in the scramble.  Ray land a big hammerfist as he tries to get the hooks in but Pettis is defending well so far.

Ray is now landing some heavy ground and pound and then locks up the body triangle on the back as Pettis attempts to work back to his feet. Ray will have about 2 minutes to work here with dominant position.

After some punches from behind, Pettis drops his hip and reverses but he made a mistake and walks right into a modified twister from Stevie Ray! It’s tight and the pressure is on Showtime’s neck and there’s the tap! I believe Stevie Ray just landed the first twister in PFL Lightweight history!

STEVIE RAY GETS THE TAP!!!!