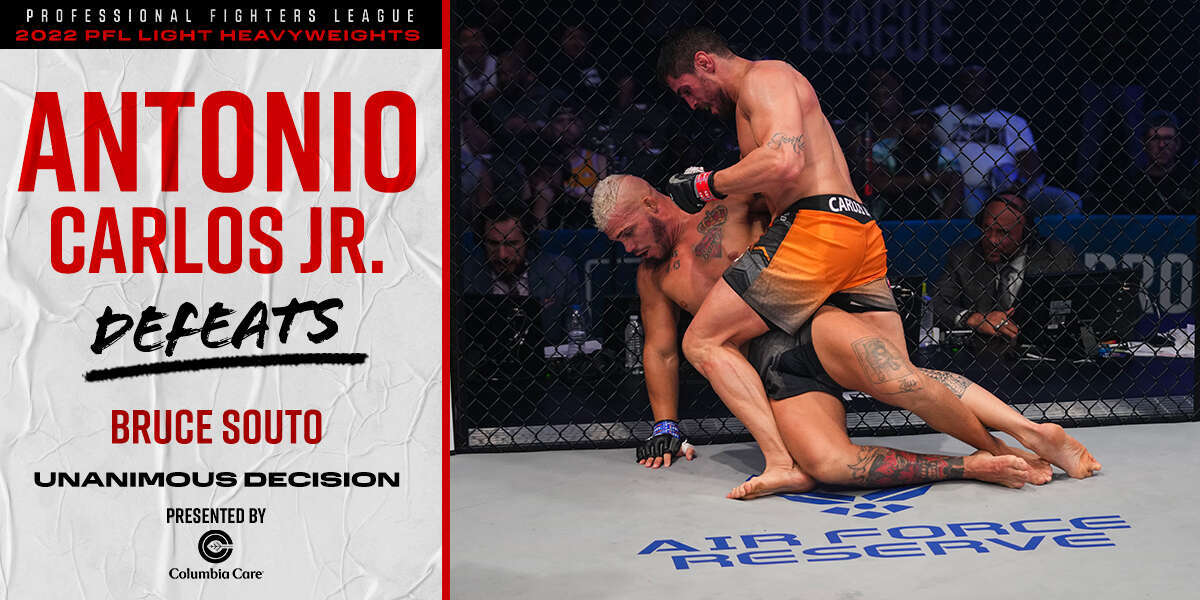 Always a fan favorite, reigning PFL Light Heavyweight World Champion Antonio Carlos Jr. (14-5), better known as “Shoeface”, looks to continue his dominant PFL run against Bruce Souto (15-4).  After the early bouts, Shoeface has officially clinched a playoff spot so all the pressure will be on Souto here to get himself a finish and keep his PFL Playoff hopes alive.

The owner of the 3rd fastest stoppage in PFL Championship history, Shoeface won his belt and million dollars last year with an incredible standing rear-naked choke over Marthin Hamlet and has only continued to pick up momentum from there.  In his first fight of the season, Shoeface made quick work of current #4 seed Delan Monte, rocking him on the feet before wrapping up a slick D’Arce choke in just 29 seconds. An IBJJF world champion, the jiu-jitsu ace has quietly added some good muay thai striking to his arsenal this year and though he has already clinched a playoff spot, he is always hunting a finish and should continue to do so tonight.

On the other hand, Souto looks to rebound from his first loss in 9 fights and over 6 years after being TKO’d by Rob Wilkinson in his opening bout of the season. Souto earned the first-ever PFL Challenger Series contract in February and will be looking to prove he belongs at this level after a disappointing first outing. Souto will need at least 5 points to keep his playoff dreams alive, meaning if the fight enters the 3rd round, Souto will be eliminated from playoff contention regardless of the outcome of the fight.

Souto opens the fight with a heavy leg kick to Shoeface’s lead leg before firing another that Shoeface is able to avoid.  Shoeface looks increasingly comfortable in the standup and it’s clear he’s put the work in that department as a stressed Delan Monte looks on.

Souto has about 15 seconds before he is officially eliminated from the playoffs and he cannot get the finish, meaning Delan Monte has clinched.  Just under 2 minutes into the round Shoeface changes levels and drags Souto to the canvas.

Shoeface is staying heavy on top but Souto does a good job working back to the cage and getting back to his feet. Souto does need to be careful as he briefly gives up his back but is able to fight the hands and turn his hips into Shoeface to temporarily get out of danger.

Shoeface is now just wearing Souto down along the SmartCage, jockeying for position before attacking a high crotch and running the pipe, but Souto is able to pop right back up as the ref calls for more activity and with about 30 seconds remaining in the round the fighters break from the clinch.

The jab has been very effective for Shoeface so far as he lands 2 quick ones to end the round.

The 2nd round begins and one has to wonder where both fighters are at mentally – Shoeface has already clinched and Souto has been eliminated, yet Shoeface is not content to coast and is still fighting aggressively and exchanging on the feet.

Souto is loading up on everything he throws and hasn’t connected in a meaningful way yet as Shoeface land a nice right cross.

Lovely entrance from Shoeface as he throws the lead hook and changes levels, initiating the clinch and driving Souto back into the SmartCage. Shoeface’s growth as a fighter is readily apparent as he peels Souto off the cage and secures another takedown.

With 2 minutes remaining Shoeface gets the back in a scramble but Souto is impressively able to shake him off and keep him from attacking submissions.

Again Shoeface tries to peel Souto off the cage and attack the outside trip but Souto is able to keep his footing.  While he isn’t taking a ton of damage, Souto has been completely unable to get his offense going as Souto throws 2 telegraphed kicks and appears to be gassing a bit.

The final round begins and Souto is once again attacking the leg kick, though at this point he likely needs to sell out for a finish to win the fight.

Souto has some success early with the striking before waltzing into the clinch once again as Shoeface secures double underhooks and starts working for a takedown again. The fighters flip position and Souto winds up pressuring Shoeface against the SmartCage briefly before being reversed once again.

At this point Shoeface is reverting to what he knows best and just constantly attacking the takedown, jockeying for position before eventually being separated by the ref due to a lack of activity.

Shoeface hits the blast double and postures up for some big ground and pound, riding out the final round in dominant position and likely locking up the decision.

Shoeface gets it done and clinches the number 3 seed in the 2022 PFL Playoffs!