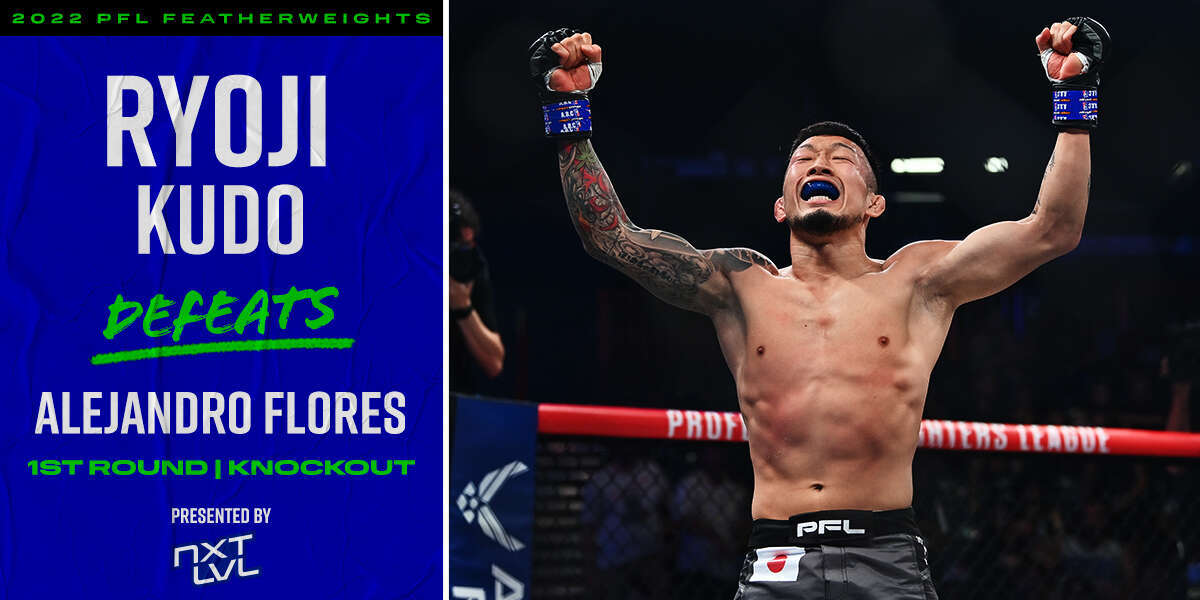 In another pivotal Featherweight clash, Alejandro “Gallito” Flores (21-3) carries 3 points and a 4 fight win streak into a clash with Ryoji Kudo (10-3-1).  Seeing as no fighter in the Featherweight division earned a finish in their first PFL Regular Season bouts, the division is wide open and both fighters playoff hopes are still alive and well.

After accruing a 7-1 record in Combate Global, Flores lost a bout on Dana White’s Contender Series to current UFC fighter Rafael Alves.  Since then, “El Gallito” has ripped off 4 straight wins including an exciting unanimous decision over Saba Bolaghi in his opening bout of the 2022 Regular Season. While we are still waiting for the playoff picture to take shape at Featherweight, a finish will likely lock Flores into his first PFL Playoff appearance.

Kudo comes into this fight following a hard fought technical decision loss to 2021 Semifinalist Brendan Loughnane, where he became the first fighter to ever knockdown the Brit.  Kudo has never been stopped and his last 3 wins have all come by first round KO. Despite not scoring any points in his PFL debut, a fast finish here would still insert Kudo directly into the playoff picture.

Our second bout of the evening is underway as the fighters both start to feel out the range and find the distance.  Flores lands a nice cross and Kudo returns with a 1-2.  There seems to be a mutual respect of power on both sides.

The fighters continue to feel each other out before Kudo secures underhooks and inititates the clinch, driving Flores back into the SmartCage.  Flores is able to pummel and reverse position before breaking and returning to the center.

Halfway through the round and Flores is slightly ahead on volume but Kudo is coming forward and JUST LIKE THAT! Ryoji Kudo lands a monster overhand right for a Quick Six! Flores is out cold!

Ryoji Kudo clinches his playoff spot with a Quick Six!