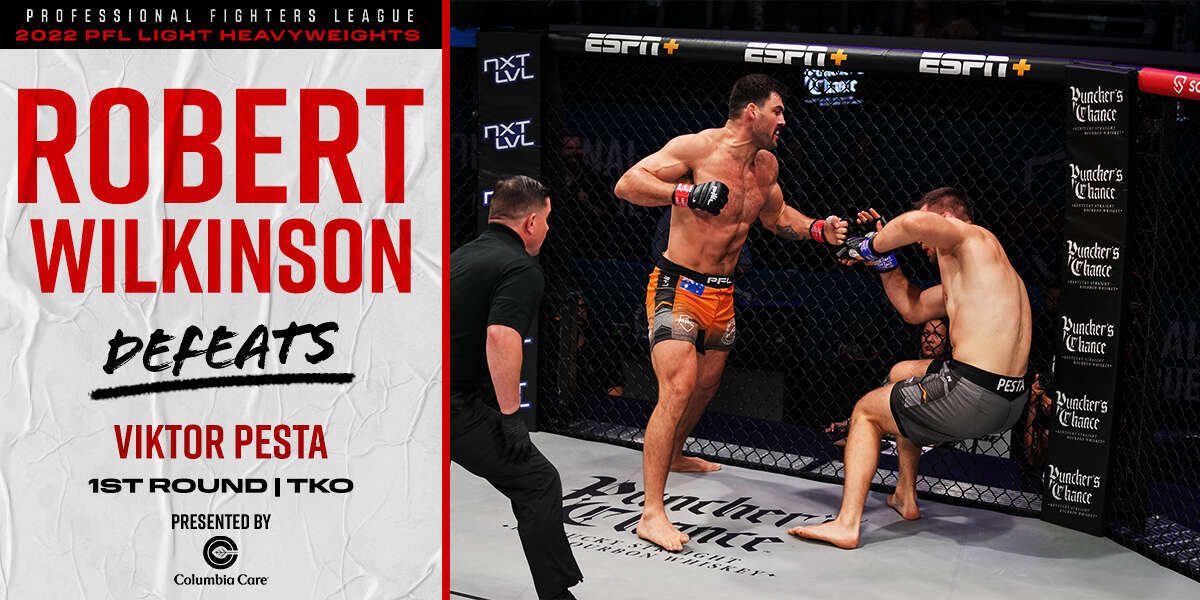 Continuing the action at light heavyweight, Rob Wilkinson (14-2) meets Viktor Pesta (18-7) in a battle of 2 well credentialed finishers.  The 2 fighters come into this bout following very different results in their respective opening fights of the season, with Wilkinson notching 5 points in impressive fashion with a 2nd round TKO over Bruce Souto while Pesta was knocked out in the first round by Omari Akhmedov.

A UFC veteran, Wilkinson seems to have injected new life into his MMA career by moving from middleweight to light heavyweight, and 1 look at the 6’3” mountain of a man will leave one wondering how he ever made 185 in the first place.  Currently in 3rd place in a highly competitive division, Wilkinson will clinch a playoff spot with any victory tonight and lock up his chance to compete for the title and 1 million dollars. Wilkinson has finished 13 of his 14 pro victories and was finished in his only 2 losses.

Finding himself in a vastly different position, Pesta will need a first-round finish to keep his playoff hopes alive, and even then, he’ll need some help from other competitors.  A fellow UFC veteran, Pesta has also racked up an impressive 14 finishes (8 KO’s, 6 Subs) while being finished in 6 of his 7 pro losses.  This fight promises fireworks as both of these fighters tend to be the hammer or the nail, the big question is who will fill which role tonight!

Both fighters try to take the center of the SmartCage and exchange right hands early. Wilkinson establishes control of the center and starts probing his jab looking for openings.  Pesta shoots a blast double and finishes it with a trip, briefly getting Wilkinson to the mat but “Razor” Rob pops right back up.

The fighters grind for position along the cage and Pesta attempts another takedown, this time a judo throw but Wilkinson keeps the whizzer and negates the attempt.  Wilkinson lands a big left hook as the fighters reset that staggers Pesta and gets him moving backwards a bit.

Pesta moves laterally along the SmartCage trying to recover while Wilkinson walks him down. We’re halfway through the round and Wilkinson drops Pesta with a left! Pesta attempts to recover but Wilkinson smells blood in the water and swarms him, finishing the fight with the ground and pound and earning himself a Quick Six!

Rob Wilkinson finishes both of his regular season bouts and clinches a trip to the 2022 PFL Playoffs!