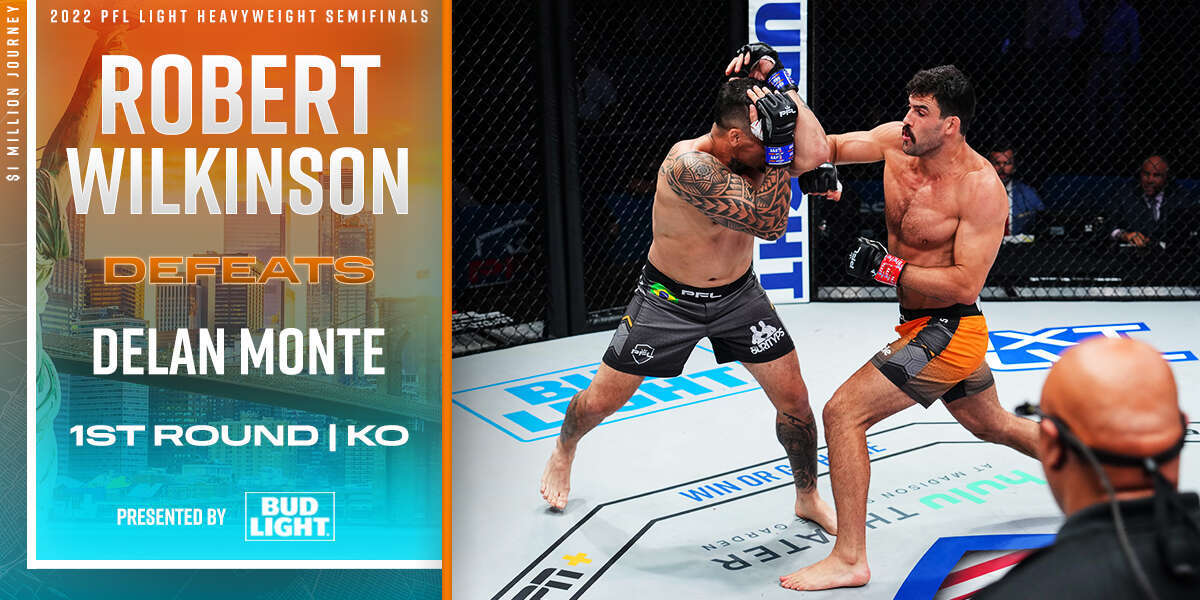 This bout officially kicks off the 2022 PFL Playoffs! We begin in the Light Heavyweight division as #1 seed “Razor” Rob Wilkinson (15-2) looks to stay hot against #4 seed Delan Monte (9-2). Both men are 2 wins away from a World Championship and 1 million dollars and have amassed a combined 23 finishes in 24 wins. This one should be fireworks!

After only competing once at Light Heavyweight in his entire MMA career before joining the PFL this season, Wilkinson tore through the regular season, finishing both of his bouts by knockout in the 2nd and 1st rounds respectively. Wilkinson looks to carry that momentum through the finals and a World Championship starting tonight.

Monte, a former training partner of Antonio “Shoeface” Carlos Jr., sports a 100% finish rate and punched his ticket to the PFL Playoffs in a thrilling bout with 2019 World Champion Emiliano Sordi. Monte needed a finish in the 1st or 2nd round to secure a playoff spot and delivered in a big way with a 1st round TKO of the former champ.  Monte’s only 2 career losses are by submission interestingly enough, so we shall see if Wilkinson feels this is a weakness he can exploit.

After a short delay the bell rings and the PFL Playoffs are officially underway! Wilkinson is coming forward early and using his jab to find his range but Monte isn’t letting him get comfortable in there, landing a nice right hand over the top.

They came to fight folks! Both fighters land in a big exchange before Wilkinson briefly secures a takedown and gets off some BIG ground and pound. Monte however is undeterred and works back to his feet and breaks, retaking the center of the cage.

Wilkinson lands a massive 1-2 and that’s the beginning of the end! Monte staggers and Wilkinson swarms him, unloading a barrage of punches and knees before Monte collapses to the mat out cold and the ref steps in. Razor Rob is going to the PFL World Championship!