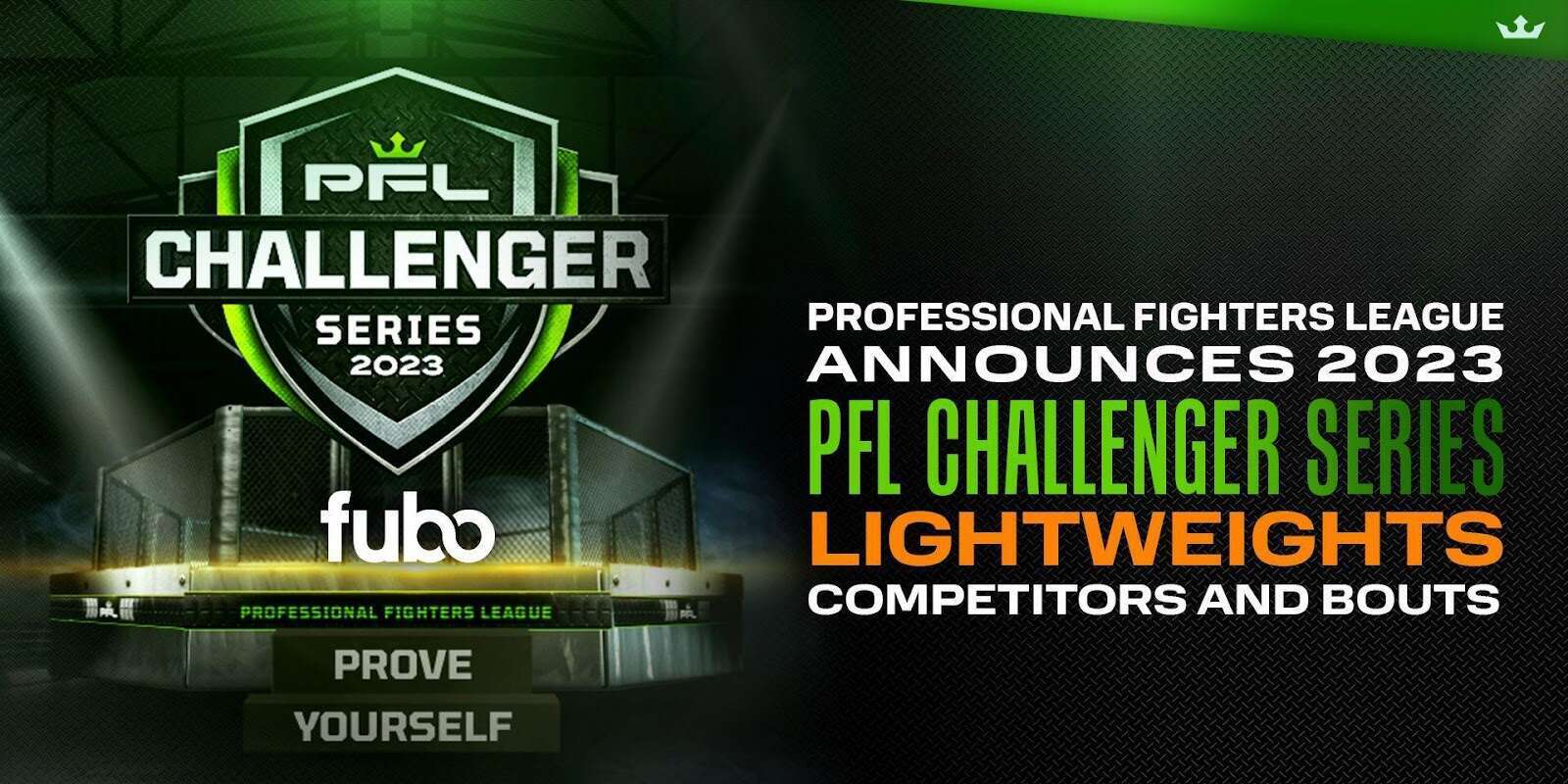 NEW YORK (January 5, 2023) - The Professional Fighters League (PFL), the fastest growing and most innovative sports league, today announced the 2023 PFL Challenger Series Lightweight competitors and bouts. The PFL Challenger Series is an eight-night competition which will stream exclusively on Fubo Sports, the live, free-to-consumer TV network from FuboTV Inc. (NYSE: FUBO), the leading sports-first live TV streaming platform. The Challenger Series airs live on Friday nights in primetime, beginning January 27 through March 17, and is held on the backlot of Universal Studios Florida in Orlando, Florida, with fighters looking to earn the opportunity to compete for a world championship and $1 million winner’s purse.

The main event of the Lightweight card will see Elvin Espinoza and Damir Ferhatbegovic match up in the PFL SmartCage. Espinoza, hailing from Nicaragua, holds a 2-0 record with the PFL along with five first-round stoppages to his name. He currently trains out of Miami and boasts an 86% finish rate, with three knockouts and three submissions. Across the cage will be Ferhatbegovic who is coming off a victory in last season’s PFL Challenger Series with a first-round knockout. The “Bosnian Barn Cat” has an undefeated record and is a Valor Fighting Championship Lightweight champion.

“As the PFL enters 2023, we are excited to announce our Lightweight division for the 2023 PFL Challenger Series being held live from Universal Studios Florida,” said PFL President of Fighter Operations, Ray Sefo.

The co-main event in the fourth week of the 2023 PFL Challenger Series will feature a battle between two Brazilians, Mandel Sousa and Paulo Henrique. Sousa, a 25-year-old top prospect, will look to continue his 100% finish rate streak that includes six knockouts and three submissions. Henrique is coming off of two victories in one night to earn a spot in the 2023 PFL Challenger Series, and is set to become the first deaf fighter to officially fight under the PFL banner.

Further action on the card will see Australia native Antonio Caruso, who boasts five wins by finish including one knockout, match up with Anthony Romero, who fights out of Ontario, Canada. Caruso started his career with a stellar 7-0 record, and trains at Hard Knocks Gym in Australia in addition to Sanford MMA stateside. Romero is coming off of an impressive flying knee victory in his last fight in April 2022, and holds a 9-1 record.

Charlie Decca, who fights out of Miami, Floria and trains at American Top Team, will fight fellow American, Jose Aguayo, who trains at Cesar Gracie Jiu-Jitsu in California. Decca, a close friend of Jorge Masvidal, has three wins by finish including two by way of knockout, and one via submission. Aguayo holds a 100% finish rate featuring one knockout and four submissions, and boasts a 4-2 record.

PFL Challenger Series winners will be determined by a judging panel, comprised of combat sports champions and celebrity guests.

PFL is the #1 fastest growing company in MMA and the #2 MMA company on a worldwide basis. PFL is the only in MMA with the sports-season format, where individual fighters compete in sports-season “win and advance” meritocracy like all other major sports. The PFL fighter roster is global and world-class, with fighters from over 20 countries and 25% independently ranked in the top 25. PFL leads in technology and innovation, with its proprietary PFL SmartCage powering real-time betting and next-gen viewing experience. PFL is aired primetime live in the U.S. on ESPN and ESPN+ and in 140 countries via 25 leading broadcast and streaming partners.

About Professional Fighters League
Professional Fighters League (PFL) is the fastest growing and most innovative sports league.  PFL is the #2 MMA company worldwide on all key metrics and the only with the sports-season format where individual fighters compete in Regular Season, Playoffs, and Championship.  The Company has four global live fight franchises:  PFL League Season, PFL Challenger Series, PFL PPV Super Fights, and PFL Europe.

PFL airs primetime in the U.S on ESPN and ESPN+ and is broadcast and streamed to 140 countries with 25 international leading media partners, including DAZN, DirectTV, Viaplay, Sky Sports, and MBC.  PFL has dozens of major brand sponsors such as Anheuser-Busch, GEICO, Bose, US Marine Corps, and Celsius Energy Drink.

MMA is the growth sport of this decade, with over 600 million fans worldwide, the youngest audience demo of any sport, and true global revenue streams.