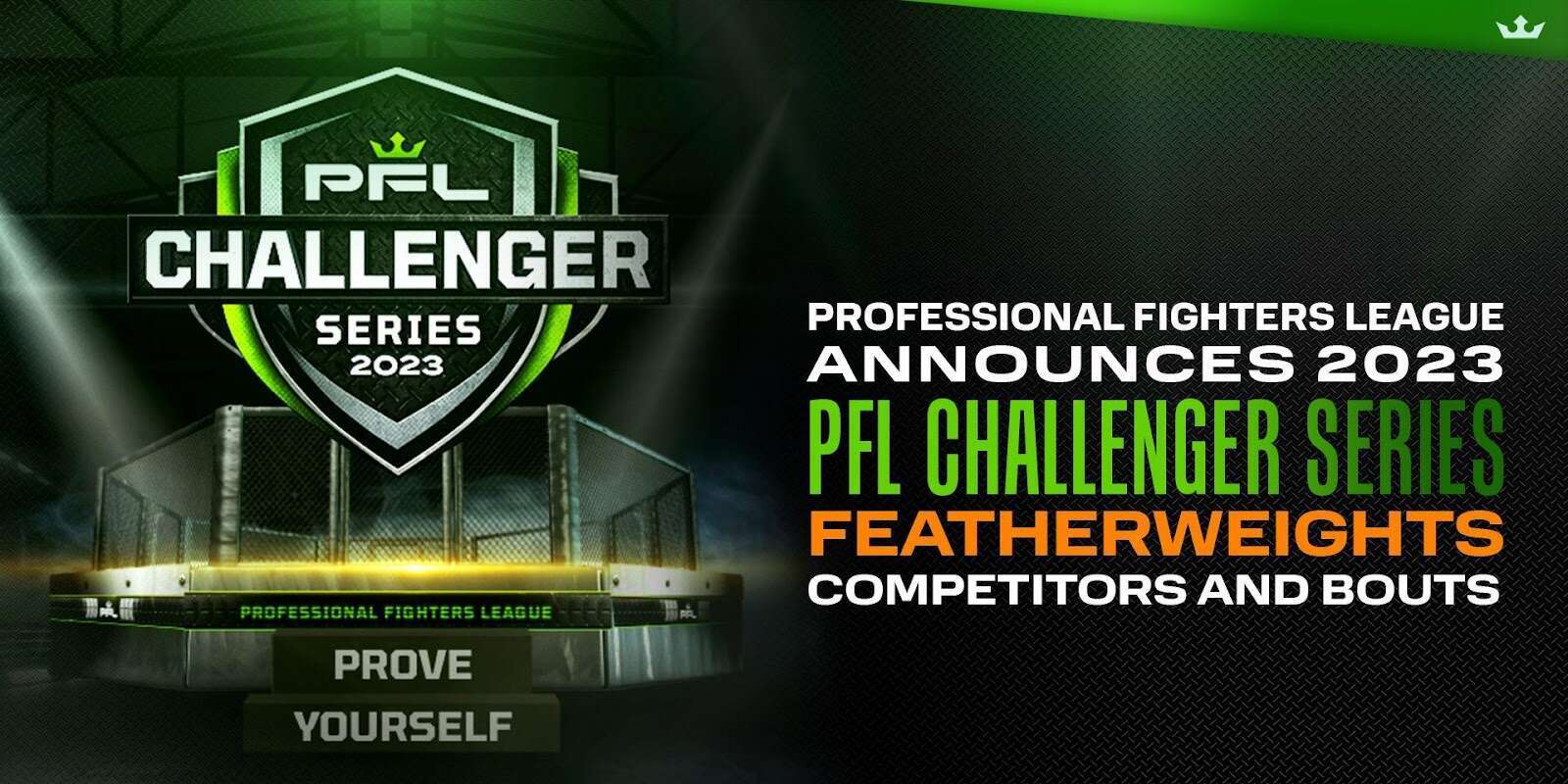 NEW YORK (January 19, 2023) - The Professional Fighters League (PFL), the fastest growing and most innovative sports league, today announced the 2023 PFL Challenger Series Featherweight competitors and bouts. The PFL Challenger Series is an eight-part competition which will stream exclusively on Fubo Sports, the live, free-to-consumer TV network from FuboTV Inc. (NYSE: FUBO), the leading sports-first live TV streaming platform. The Challenger Series airs live on Friday nights in primetime, beginning January 27 through March 17, and is held on the backlot of Universal Studios Florida in Orlando, with fighters looking to earn the opportunity to compete for a world championship and $1 million winner’s purse.

The main event of the Featherweight card will feature Brahyan Zurcher and David Evans going head-to-head inside the PFL SmartCage. Zurcher, a 26-year-old striker with two professional wins caught the eye of PFL’s President of Fighter Operations Ray Sefo while training at the famed Xtreme Couture Gym in Las Vegas. Standing across the PFL SmartCage will be David Evans, whose MMA record of five wins includes three stoppages.

“The PFL Challenger Series is where some of the best fighters in the world begin to create their legacies, and we’re excited to introduce the Featherweight division for the 2023 PFL Challenger Series” said PFL President of Fighter Operations, Ray Sefo. “We are proud to present these athletes with a global platform, fighting to achieve PFL Regular Season glory.”

Ireland’s Nathan Kelly, riding a winning streak with five first-round stoppages, will do battle with American wrestling specialist Zachary Hicks, who enters having won his last three fights and submitting five of his opponents.

Further action will see Ago “The Bosnian Dragon” Husic and undefeated Gabriel Braga compete for the chance at a PFL contract. Husic, who famously took a fight with 2022 PFL Featherweight Champion Brendan Loughnane on five days’ notice, returns to the SmartCage against Braga, a Muay Thai practitioner who trains with the famed Nogueira brothers.

Vikas Singh Rhul, a former Indian regional bodybuilding champion, will take on Igeu “Smiley” Kabesa, who hails from the Democratic Republic of Congo, and is a wrestling and jiu jitsu practitioner. Kabesa is a two-time EFC Worldwide FW champion with 10 career finishes to his name.

PFL Challenger Series winners will be determined by a judging panel comprised of combat sports champions and celebrity guests. The PFL is at the forefront of innovation, recently reaching an agreement with Jake Paul, who will compete in, recruit for, and promote the league’s PPV Super Fight division.

PFL is the #1 fastest growing company in MMA and the #2 MMA company on a worldwide basis. PFL is the only in MMA with the sports-season format, where individual fighters compete in sports-season “win and advance” meritocracy like all other major sports. The PFL fighter roster is global and world-class, with fighters from over 20 countries and 25% independently ranked in the top 25. PFL leads in technology and innovation, with its proprietary PFL SmartCage powering real-time betting and next-gen viewing experience. PFL is aired primetime live in the U.S. on ESPN and ESPN+ and in 140 countries via 25 leading broadcast and streaming partners.

About Professional Fighters League
Professional Fighters League (PFL) is the fastest growing and most innovative sports league.  PFL is the #2 MMA company worldwide on all key metrics and the only with the sports-season format where individual fighters compete in Regular Season, Playoffs, and Championship.  The Company has four global live fight franchises:  PFL League Season, PFL Challenger Series, PFL PPV Super Fights, and PFL Europe.

PFL airs primetime in the U.S on ESPN and ESPN+ and is broadcast and streamed to 140 countries with 25 international leading media partners, including DAZN, DirectTV, Viaplay, Sky Sports, and MBC.  PFL has dozens of major brand sponsors such as Anheuser-Busch, GEICO, Bose, US Marine Corps, and Celsius Energy Drink.

MMA is the growth sport of this decade, with over 600 million fans worldwide, the youngest audience demo of any sport, and true global revenue streams.