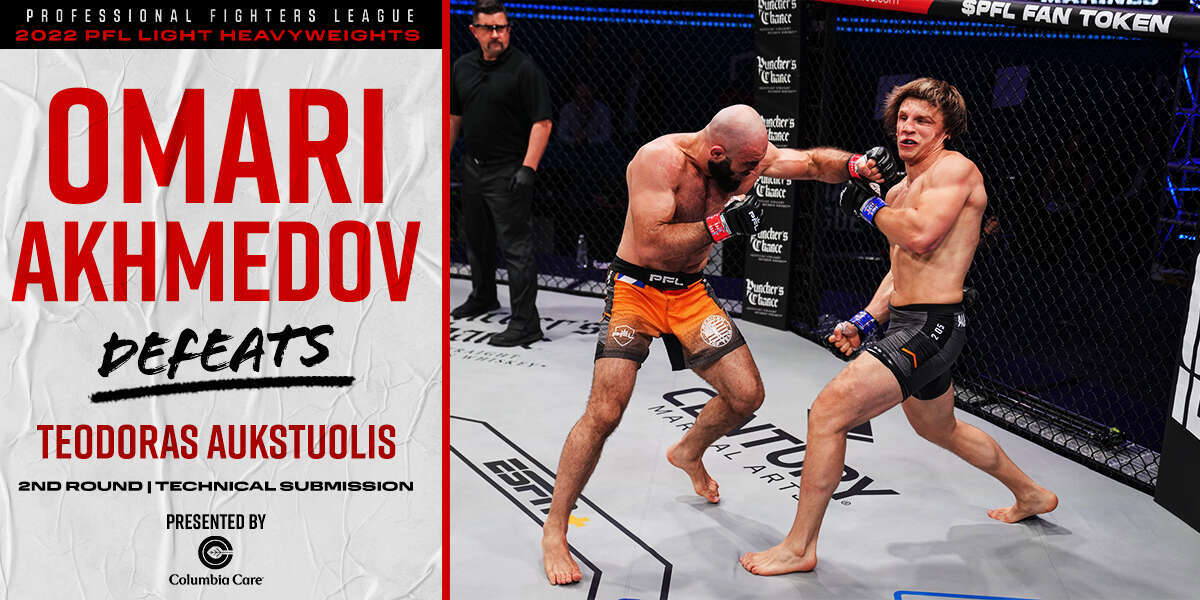 Omari Akhmedov (22-7-1) enters this bout following a dominant PFL Regular Season debut wherein he knocked out Viktor Pesta in under 90 seconds, earning 6 points and a top spot in the light heavyweight standings. His opponent, Teodoras Aukstuolis (11-6) enters the SmartCage with 0 points following a unanimous decision loss to Marthin Hamlet.

A 15 fight UFC veteran, Akhmedov went 9-5-1 with the promotion over 8 years.  A staple at American Top Team and a trailblazer for Dagestani MMA fighters, Akhmedov can clinch a trip to the playoffs with a win of any kind tonight as he looks to get 1 step closer to a PFL Championship and 1 million dollars.

Following a 4 year layoff from MMA, Aukstuolis took 2021 runner-up Marthin Hamlet the distance in his promotional debut following a few years of competing in combat sambo.  Aukstuolis will need a 1st or 2nd round finish to keep his playoff hopes alive, and seeing as he has finished 9 of his 11 professional wins, he certainly has the tools to give Akhmedov a run for his money.

We get a look at the ref cam before the bout begins and both men are war ready.  Patience from both men early as Aukstuolis seems to really respect the power and grappling ability of Akhemdov.

And rightfully so! Aukstuolis overextends on a punch and Akhmedov takes him down.  Akhmedov now in half guard on top with over 3 and a half minutes to work.  Aukstuolis is working towards the cage and trying to shrimp out and hip escape, but Akhmedov stays heavy on top and prevents the escape before peeling Aukstuolis off the cage and continuing to attack an arm triangle.

Aukstuolis locks up the triangle on Akhmedov’s leg from the bottom and holds on to keep from being damaged.  Akhmedov briefly seems to make some headway on that arm triangle before Aukstuolis is able to successfully sweep to top half guard.  Aukstuolis postures up and gets off some ground and pound but nothing too significant.

Akhmedov takes advantage of the aggressiveness and escapes and gets back to his feet before landing a bomb of a left hook that staggers Aukstuolis! Aukstuolis recovers but Akhmedov keeps the pressure on and lands a nice 1-2 again drawing a reaction.

Akhmedov continues landing offense with an overhand right and a check left hook as the round winds down before Aukstuolis loses his footing and Akhmedov finishes the round on top.

Akhmedov once again opens the round looking patient, a bit surprising considering how hurt he had Aukstuolis at the end of the round.

Akhmedov feints the level change into the overhand right once again but Aukstuolis lands a big straight that floors Akhmedov and we’ve got a fight! Aukstuolis may have made a mistake following Akhmedov to the ground as Omari recovers and sweeps back to top half guard.

Once again Akhmedov is attacking the arm triangle from mount and this time he’s able to get off the correct side. The choke gets tighter and tighter as Aukstuolis tries to walk to the cage and escape but he can’t get out of Akhmedov’s grasp! Just like that Aukstuolis is asleep on the mat and the fight is over! A Fab Five for a bloodied Omari Akhmedov!

Omari Akhmedov puts Teodoras OUT! That's good for 5⃣ points and a spot in the 2022 #PFLPlayoffs#2022PFL4 pic.twitter.com/YJuJ0Ih5t0

Omari Akhmedov clinches a trip to the PFL Playoffs in his debut season with 2 finishes in 2 fights and 11 total points.