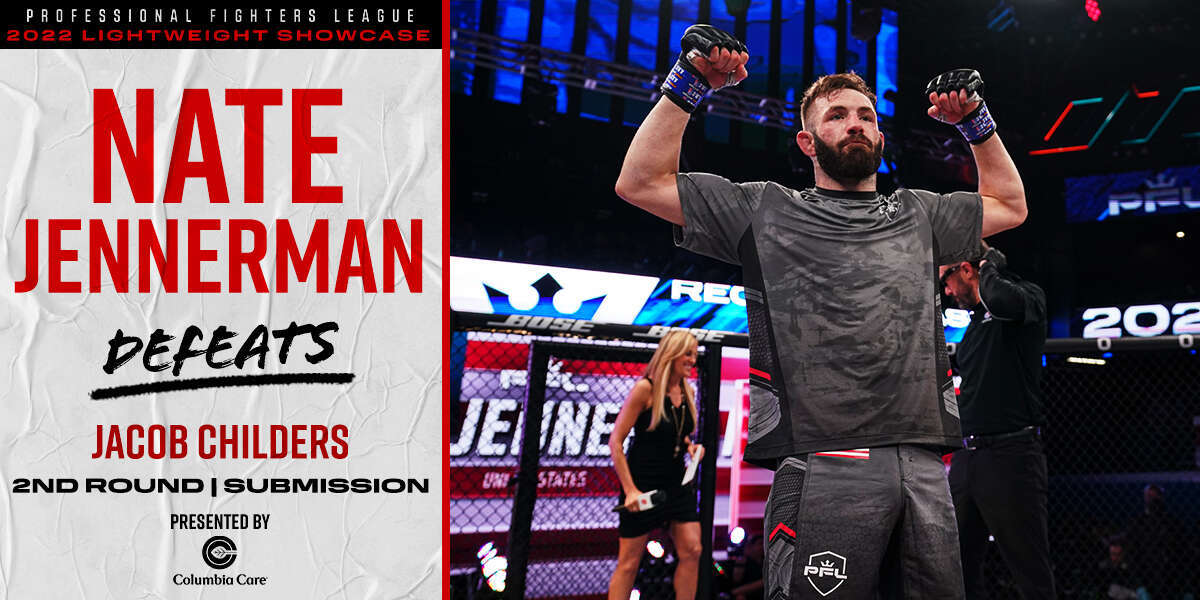 Nate Jennerman Impresses In Promotional Debut With a 2nd Round Submission

A longtime staple of the regional MMA scene in his native Wisconsin and an LFA veteran, Jennerman rides back-to-back submission wins into his promotional debut with PFL. A jiu-jitsu specialist, Jennerman has racked up 11 submissions in 15 professional wins and looks to add to that number and earn himself a spot in next season’s tournament with a win tonight. Jennerman is also the owner and head coach of his home gym Roufusport Sheboygan.

Childers gets the opportunity to showcase his talents for PFL fans after Bruno Miranda was forced to pull out of his scheduled bout with Jennerman during fight week.  An LFA and Combate veteran, Childers looks to make the most of his short-notice opportunity with a big step up in competition.

And we are officially underway! Jennerman opens with a front kick followed by a blitzing hook combo and he has Childers on his heels early.  30 seconds in and Jennerman is landing his right hand with ease.

Jennerman throws an illegal elbow in the clinch against the cage and the referee separates the fighters and issues a stern warning. After a brief pause, Jennerman is right back on Childers, unloading knees and short uppercuts in the clinch and controlling the pace of the fight early.

2 minutes into the fight and Jennerman has outstruck Childers 35 to 5 and is keeping the pressure on.  Childers lands a nice lead hook moving backwards but is still having trouble finding the range and establishing his rhythm.  Childers appears to be attempting to time up the check hook as Jennerman enters the pocket.

Jennerman is pushing a phenomenal pace and isn’t giving Childers any time to think or adjust as he keeps up an offensive onslaught.  Jennerman’s corner asks for some body work and he quickly obliges, though it looks like the pace may finally be starting to take a toll on Nasty Nate.

With a minute left in the round, Jennerman is still keeping up his output and completely controlling the pace and range at which this bout is taking place.  Jennerman is excellently utilizing the clinch and lands big on the break before attempting a superman punch just before the bell.

Dominant round 1 for the Wisconsin native.

We’ll see if Childers is able to make the necessary adjustments in the corner to come up with a way to diffuse Jennerman’s offense.  We open the round with more of the same as Jennerman throws the same front kick and is right back to throwing that big right hand.

Childers makes a mistake and allows Jennerman to lock up a guillotine.  Both men work to improve position and Jennerman is able to take the back of Childers and starts attacking the rear-naked choke.  Childers is fighting the hands well but Jennerman keeps working and gets under the chin!

Jennerman gets the fight to the ground but loses the choke, he now has over 3 minutes to work with Childers back. And that didn’t take long! Jennerman sinks in a TIGHT rear-naked choke and gets the submission!