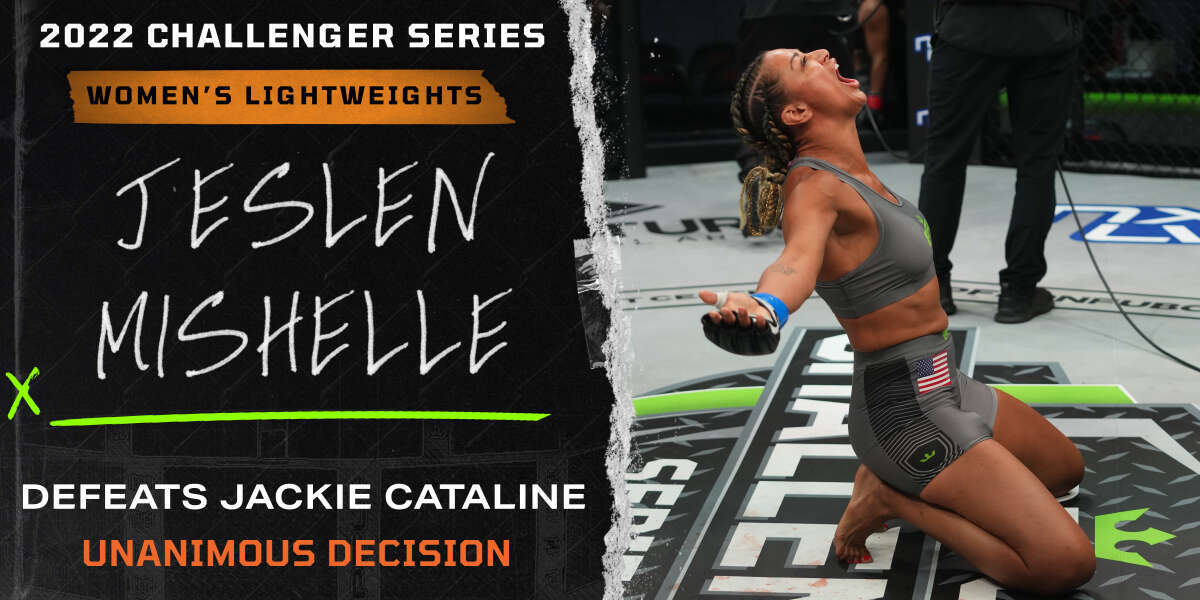 It’s time to see who will seize her second chance.

Jackie Cataline made her much-anticipated MMA debut back on March 4 during Week 3 of the 2022 PFL Challenger Series –– and a devastating finish followed.

Just moments into her fight, Catline snatched Camee Adams’ neck, earning the technical submission and moving her record to 1-0. In the end, though, it wasn’t enough to earn Cataline the contract on the evening.

Now, she faces Jeslen Mishelle, a fighter who faced the exact same scenario back on that March 4 fight card. Mishelle finished Julia Dorny via TKO –– also in Round 1 –– but still missed out on the contract, as it was Martina Jindrová instead getting the call.

They’re swinging early, with both women landing on the feet to open the bout. The fight quickly gets to Cataline’s world in the clinch, though. Mishelle nicely avoids the takedown here, and they separate.

Mishelle sweeps Cataline’s legs beautifully, but she’s back to her feet in a flash. Now, Cataline shoots and gets the takedown, putting Mishelle on the canvas. She gets to side control, forcing Mishelle to turtle against the cage.

Cataline looks to take the back, but Mishelle defends nicely and gets back to her feet and back to striking range … where Cataline slams her immediately for her troubles. What a takedown.

She’s once again looking for Mishelle’s back, threatening a rear-naked choke. No hooks in, but Cataline’s applying some serious pressure here. Mishelle keeps her chin in, avoiding the choke, but this is an uncomfortable position no doubt. The round ends there.

Let’s see if Mishelle can work on the feet and avoid the takedown here.

One minute in, and not much to note in Round 2. Both women are extremely cautious to open the second frame. Mishelle steps in with a leg kick, and Cataline fires back with a one-two. Mishelle’s looking more comfortable now, and she presses forward, landing a nice stepping knee.

Slow shot from Cataline is easily defended, and Mishelle makes her pay with a nice knee. Not only did Cataline not get a takedown this round –– she never got close. Much more competitive round, and we’re off to the third and final frame.

Final round, and Mishelle’s out aggressively once again. Superman punch lands, and Cataline clinches, but Mishelle wins the exchange with a series of knees.

Mishelle slips just a bit on a kick, and Cataline capitalizes, getting the takedown. Mishelle is extremely active off her back immediately, though, and she looks for a triangle before turning it into an omoplata attempt.

Cataline sees it all coming and escapes, but Mishelle threatens a sweep, using the space to scramble to her feet. Mishelle looks much fresher here with just over two minutes to go.

They clinch against the cage, Mishelle again scoring with knees. They separate, and Cataline shoots from the outside, getting nowhere on it.

Mishelle’s feeling it now, bobbing and dancing a bit as she senses the momentum fully shifted in her favor. She’s absolutely cranking the intensity down the stretch here, firing away with a long combo that forces Cataline to go fully defensive against the cage. Cataline with another desperation shot to close the fight, but it’s stuffed, and the final bell sounds.

Cataline started on fire –– but Mishelle took the fight over in Rounds 2 and 3, and that’s all the judges needed to see.