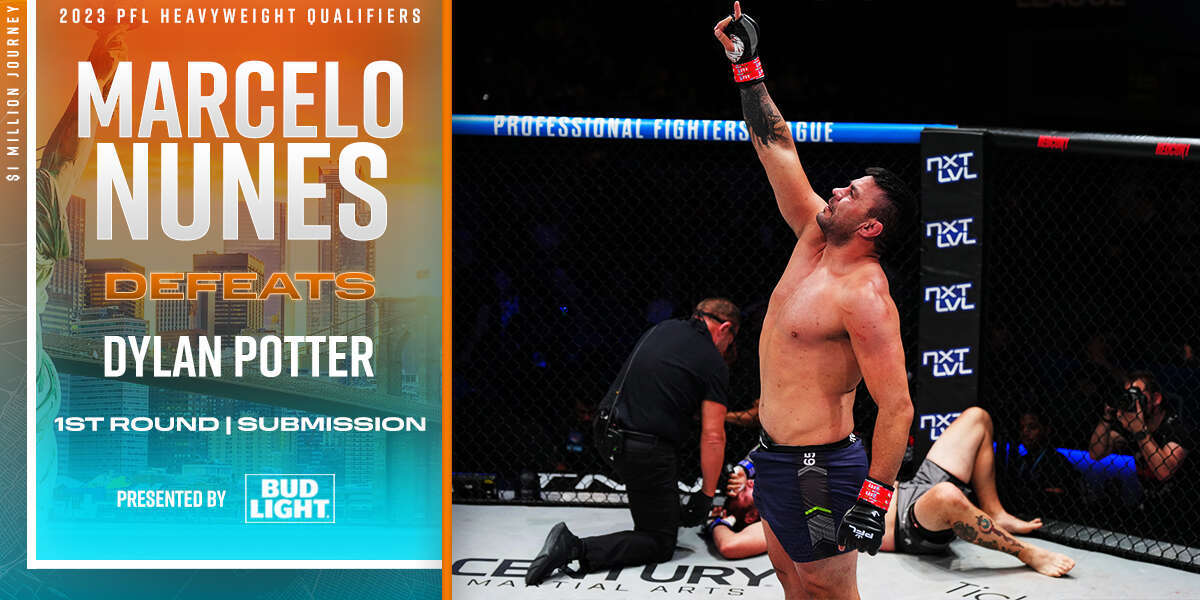 2 heavyweights collide in another 2023 Season Qualifier Bout. BJJ ace Marcelo Nunes (8-1) meets fellow submission artist Dylan Potter (10-5) to decide who gets the invitation to compete in the 2023 Regular Season. With 6/8 of Nunes’ pro wins coming by way of submission and 7/10 of Potter’s wins also coming by submission, this is truly a bout for the grappling aficionados out there.

From 2016-2020, Nunes was away from the sport and did not compete, but clearly he did not miss a beat over that time frame, racking up 3 wins since his return to competition with all 3 ending the 1st or 2nd round. Nunes won his last bout on the PFL Challenger Series but was not awarded a contract, a perceived mistake he seeks to correct tonight with a win to punch his ticket to the big show next year.

Potter too has been on a small hiatus from MMA competition. His last fight was a loss on Dana White’s Contender Series which was later overturned to a no contest after it was discovered Potter had Covid that led to pneumonia leading up to the fight.  However, he made no excuses and still blames the loss on his own technical mistakes which he hopes have been shored up heading into tonight.

The bell rings and our final bout of the evening is underway! Potter quickly takes the center of the Smartcage but Nunes wastes no time at all shooting and completing the takedown. Nunes gets to half guard and continues to look to advance position, threatening an arm triangle while also landing some big ground and pound.

Potter is desperately clinging to the half guard as Nunes attacks the arm triangle. The ref checks to make sure Potter is still awake and he gives the thumbs up but only seconds later he taps and Marcelo Nunes has secured a spot in the 2023 PFL Regular Season!

Marcelo Nunes gets the tap in the 1st round and earns a spot in the 2023 PFL Season roster!#PFLPlayoffs LIVE on ESPN+
🌎 https://t.co/jPNvomkWj8 pic.twitter.com/VDnIdslCy6

Marcelo Nunes puts an exclamation point on it, submitting Dylan Potter in the 1st round of a fight that was one way traffic from the jump and clinching a spot in the 2023 PFL Regular Season!