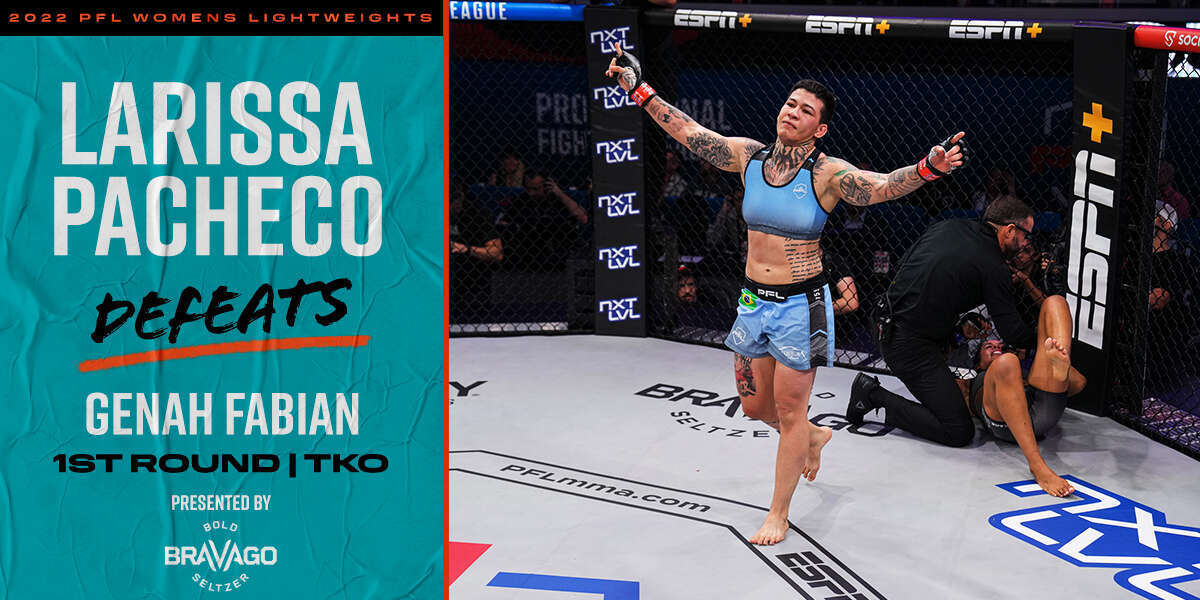 Current division leader Larissa Pacheco (16-4) takes on Genah Fabian (5-2) in a battle that features owners of 2 of the more stunning outcomes of the PFL Regular Season so far. Pacheco comes in off the 3rd fastest finish in the history of the division, knocking out Zamzagul Fayzallanova in just 1:25, earning her 6 points. Fabian, meanwhile, defeated former Bellator Champion Julia Budd in her opening bout of the season, but missed weight and therefore finds herself in last place in the division with -1 points.

As previously stated, Pacheco enters the SmartCage tonight in 1st place in the Women’s Lightweight standings following a monster 1st round KO in her last bout, her 3rd consecutive 1st round KO. Pacheco qualified for the Playoffs last year, but was forced to sit out after missing weight. She looks to get back on track this year and is gunning for a rematch of the 2019 PFL World Championship between herself and reigning champ Kayla Harrison. Pacheco will clinch the number 1 seed with any finish and will clinch a Playoff spot with any victory.

Fabian meanwhile made weight for this bout after missing weight in her first regular season bout of the season. As such, she currently finds herself in last place in the standings and in need of a 1st or 2nd round finish to keep her Playoff hopes alive.

We are underway in one of our most compelling fights of the evening and Pacheco opens with a big right early! Fabian is stunned and latches on to a single leg while she tries to collect herself.

Pacheco is able to take the back in the ensuing scramble and Fabian works back to her feet before Pacheco lands a takedown of her own and winds up straight in the full mount, raining down some short ground and pound as she attempts to attack an arm triangle.

Pacheco now locks up the sub tight as Fabian tries to fight her off! Fabian is doing a good job using the cage to prevent Pacheco from getting off to the side and making the choke even tighter but Pacheco is still on the attack, chasing the submission early here in round 1!

Pacheco makes an adjustment and briefly tightens the choke before deciding to abandon it and start punching.  Pacheco is doing big damage here as the ref looks closely and decides he’s seen enough! Another dominant outing for Pacheco as she earns her 4th consecutive 1st round TKO!

Larissa Pacheco clinches the #1 seed in the Women’s Lightweight division with a dominant Quick Six!