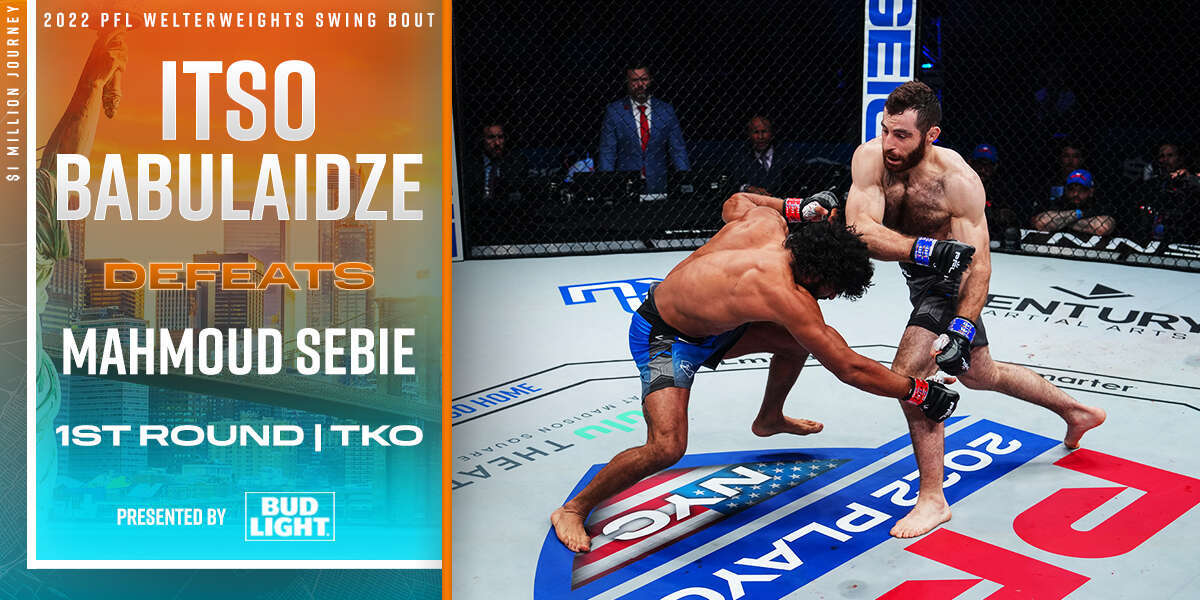 Our swing bout will officially be the 2nd of the evening as Egyptian Olympic wrestler Mahmoud Sebie (2-1) takes on Itso Babulaidze (1-0). Sebie looks to rebound in this spot after suffering his 1st loss in MMA in a bout with Bellator last November. Sebie rose to prominence after posting a video on social media alleging corruption among the sanctioning bodies back home. Babulaidze comes into this bout following a successful professional debut for CFFC in March and he will be the 1st fighter from the nation of Georgia to compete in the PFL.

Both fighters rush to take the center of SmartCage as we begin! Both fighters are throwing recklessly to start before Sebie is able to secure the takedown and quickly scramble to the back, a move one could call his signature even this early in his pro career.

Babulaidze is not content to accept the position however and creates a scramble opportunity and briefly gets on top before disengaging and returning to the feet.

Sebie looks a little frantic when striking but reengages the clinch and looks for a takedown.  Oh! Sebie lands big and briefly floors Babulaidze but he quickly recovers.  Sebie looks like he’s starting to settle in and find the range on the feet, landing another stiff jab that gets Babulaidze’s attention.

Halfway through the round and they are standing in the pocket and swinging!  Now, it’s Babulaidze able to secure a  takedown on the former Olympian, no small feat in its own right. With 2 minutes to go it’s Babulaidze on top looking for wrist control but Sebie is not to be held down for long, creating just enough space to work back to his feet.

They break again and Sebie rushes right back in using power hooks to initiate level changes before breaking once again. Sebie appears to be slowing down a bit and OH! Just like that! Itso Babulaidze times up Sebie’s entry perfectly and lands a flush uppercut, flooring Sebie and swarming him for the finish!