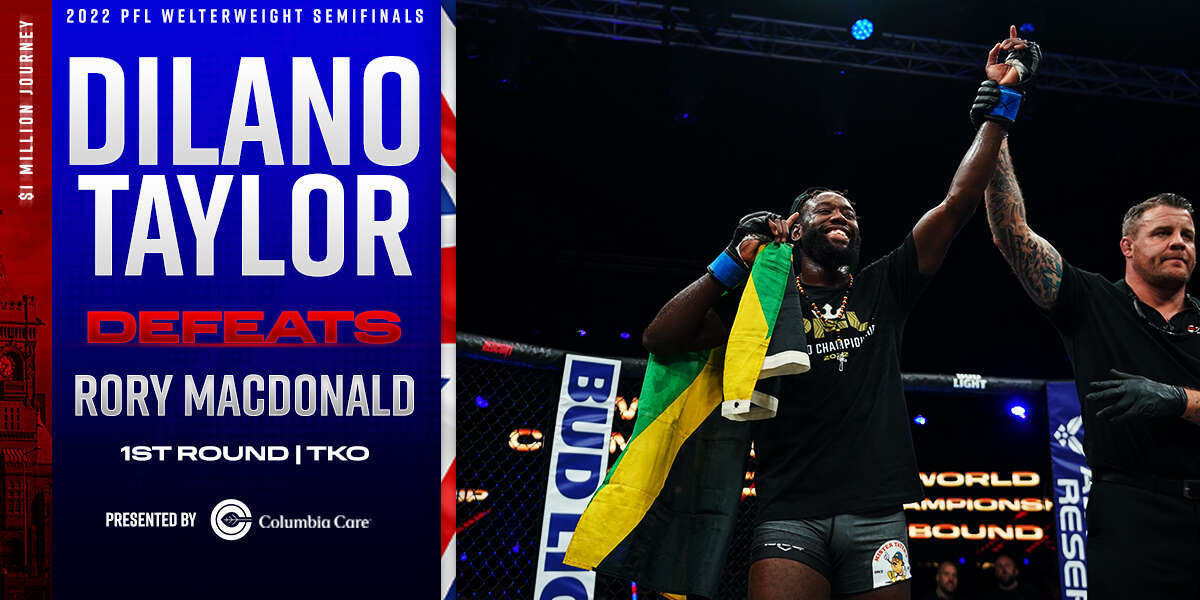 In our final PFL Playoff Semifinal of the evening, #1 seed “The Red King” Rory MacDonald (23-9-1) takes on late notice replacement and #5 seed Dilano Taylor (9-2).  The winner of this bout will face Sadibou Sy for the PFL Championship in November. A former UFC title challenger and Bellator Champion, MacDonald has been competing at the highest level for over a decade at this point. Despite a disappointing performance in his last outing, MacDonald secured the #1 seed with a 1st round Submission of Brett Cooper in the regular season and has shown flashes of what makes him such a great and dangerous fighter.  For Taylor, this will easily be the biggest fight of his career. Taylor secured a contract on this year’s PFL Challenger Series and seeks to become the 1st Challenger Series alumni to fight for a PFL Championship on the back of a win over former champ Joao Zeferino.

To no one’s surprise the bout begins with Rory shooting a takedown, however Taylor fights him off well and actually reverses, winding up on top in Rory’s guard.

Rory is threatening an armbar but Taylor is defending beautifully so far, scooting Rory back to the fence to prevent him from having the angle to finish the sub.

Taylor is now heavy on top in half guard, peppering shots to the body and perhaps looking to set up an arm triangle with some shoulder and head pressure.

As Taylor looks to transition Rory jumps on the opening and uses a single leg to get back to his feet where the fighters break and Taylor instantly lands a stiff jab.

The fighters seem to be finding each other's range as Taylor lands a heavy low kick. Neither man seems to want to stay in the pocket for an extended period of time. Taylor is landing his jab very well, already opening a small cut over the eye of Rory.

Rory is changing levels looking for the takedown but he’s telegraphing it and Taylor is wise to it and well out of danger.  Rory seems very tepid in the stirking exchanges early

OH! Taylor FLOORS Rory with a massive right hand and swarms him, pouring on damage and getting the finish! WOW! Dilano Taylor goes from alternate to competing for a PFL Championship and 1 million dollars!

Dilano Taylor makes a statement, knocking out Rory MacDonald to go from alternate to PFL Playoff Finalist and putting himself 1 win away from 1 million dollars and a PFL Championship!